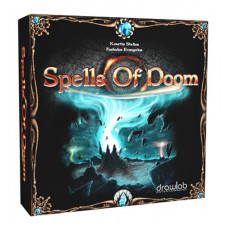 Spells of Doom, the mage-dueling game from Greek publisher Drawlab has some promise. It makes some smart design choices that reduce the barrier to entry for games in this genre. Yet after a game or two I realized I would rather be playing one of its obvious inspirations. Spells of Doom manages to simplify the difficult pieces of the genre, only to stumble when it comes to pacing and originality. 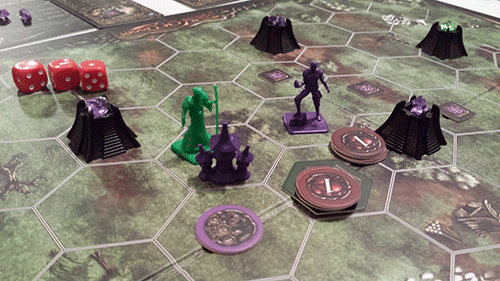 The players (two of them, or four players divided into two teams) will be racing around on a hex board trying to zap each other, and trying to take control of mage towers. These magical structures generate both victory points and mana, so controlling them is incredibly important. Aside from that, all of the standards are here. The players will summon creatures that can attack the other team. They will cast attack spells and card buffs. This is done with mana, which is used for pretty much everything. Players can permanently increase their attack and armor by spending mana, or they can use it to add to their movement. They can even create new structures on the board to generate more mana or attack other players. Every six turns the players will get VP for the mage towers they control, as well as an immediate 4 VP for defeating the opposing mage, forcing them to respawn. The first player to reach a certain VP threshold is the king mage, or something like.

All of this sounds like an explosion at the game design factory, spare parts from other similar games smooshed together. These elements have all been done elsewhere, especially in games like Mage Wars, Summoner Wars, and Wiz-War. But there are a couple of smart choices that distinguish Spells of Doom from its competition. The first is how it handles unique characters. This is normally a stumbling block for games, injecting a huge dose of rules weight to give the different mages some personality. Here each mage has their own deck of cards that contains all of their unique spells already in there. These spells are explained with a minimum of fuss and text, giving the different characters distinct personalities and playstyles with almost no extra rules to internalize. A few references to the rulebook might be necessary early on, but it flows well soon enough.

The unique mages are helped enormously by the hand management and mana systems. Each player begins each turn with five cards. There’s no way to chain together long strings of draws, and unused cards are discarded at the end of the turn, so the player has only a few decision points in their hand. The game’s larger decision tree lies in its mana system. New mana is generated every round at a steady clip, but it’s never so much that you feel like you can do all of the things you want to do. It’s a tough decision to choose between strengthening your attack and building a defense tower, for example. The game also manages the slippery subject of interrupts, allowing the player to spend mana to place a limited number of cards in a reserve next to their player boards. From there they can be played on other player’s turns. Only certain cards can do this, simplifying matters. The mana system is definitely the most compelling part of the game, giving lots of tempting choices without overwhelming the player.

However the game fumbles when it comes to the mage towers. These permanent features on the board are easy to claim when no one controls them yet, but they become difficult to grab once they’ve been claimed. The trouble is, once a player controls the majority of them, the other player has to begin focusing on take back control. This requires the player to first attack the mage tower to the tune of seven damage - something that will normally take a couple of attacks. It then requires another two mana to claim the empty tower. There’s a mad early dash to grab unclaimed towers, and then the player who controls fewer has to do the hard work of taking them back, and it’s just not as much fun to fight a structure as it is to fight the other player. You could go after the player instead and get VP that way, but there are a number of cards that heal damage in each deck, and the opponent will have a mana advantage anyway, allowing them to cast more spells and move farther, among other things. Even though the game moves briskly, it forces the players to occupy themselves with less interesting tasks. 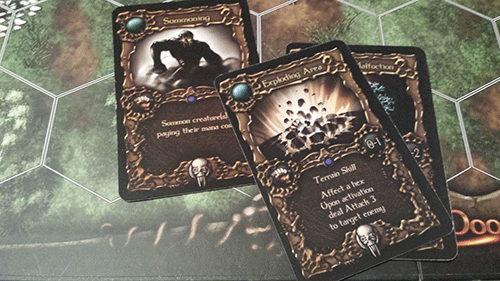 The production does the game no favors. This is a hideous game. The illustrations are murky, dark, and generic, and the tokens are hard to distinguish past player color. In some games they will be all over the board too, combined with wound tokens that look an awful lot like the red player’s tokens. A couple of effects are also buried graphically, making statuses like burn and stun easy to forget. The rules are frustrating as well, though the in-box errata clarifies a few things. For a comparatively straightforward game, it’s tougher to learn than it should be.

More than anything, Spells of Doom’s big problem is that its inspirations feel very transparent, and the comparison isn’t flattering. It’s easier to play than something like Mage Wars, but its smart design choices amount to ease of play more than anything revelatory and it’s not as direct or fun as either Summoner Wars or Wiz-War. Compared with the big boys it fails to make a very compelling case for itself.