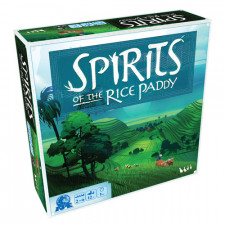 Spirits of the Rice Paddy Review

Thereâ€™s a long proud tradition of Eurogames about back-breaking labor. That sounds bad, but it doesnâ€™t have to be. Games like that work because it can be fun to put together a plan and execute it successfully, and to do so in competition with other players. Given that fact, it is baffling that Spirits of the Rice Paddy works so hard to make sure the player will be unable to plan. The execution of every scheme is delayed until the game ends and you wonder what you actually accomplished. Itâ€™s back-breaking labor indeed.

It doesnâ€™t help that the premise is one we have seen so many times that a better game could use it as satire. Like many games before it, Spirits of the Rice Paddy is a game about who can farm the best. Everyone gets their own board and their own workers, and they have to send those workers into the rice paddy to toil away so they can harvest your victory points. Over six rounds, the players will clear rocks, erect fences, flood fields, plant rice, and then pick it to rack up points.

The weird part is that there are a lot of parts that, in isolation, work pretty well. The best is probably the Spirit cards, which are distributed to the players via a draft at the beginning of the game and again halfway through. These cards are numbered, with more powerful cards receiving stronger effects. The catch is that higher cards push you further back into the turn order. This is important because of how water flows into the fields. Every round a certain amount of rain produces water that will flow from the first player, to the second, and so on. Those players further back might find themselves short on water for their rice, or even without any at all. Itâ€™s a good trade-off, forcing the players to weigh a really good card against turn order.

But unfortunately the Spirit cards arenâ€™t the only cards in the game. A couple other things in Spirits of the Rice Paddy are resolved by a card flip. Thereâ€™s a card to see how much water will be available for the round, and another dealt to the players at the beginning of the game to allow everyone to start with some different combination of resources and workers. Those combine with the card draft to create situations that strongly favor certain players, mostly because they got lucky. This isnâ€™t necessarily a bad thing, but it really requires a bigger opportunity cost to get strong effects into play. Here the only penalty is turn order, and itâ€™s not as strong a penalty as the game thinks it is. Even if youâ€™re going last in the turn order, you have a really strong card that, in many cases, will trigger every round automatically or will have a persistent effect. I generally find balance to be an overrated aspect of game design, but this one goes out of whack easily, sometimes to devastating effect for some players.

That off-kilter feeling is amplified by the grueling gameplay. For a game that only lasts six rounds (with a seventh one that serves mostly as clean-up) it takes a long time to get anything done. Players need to clear a field, fence it off, plant the rice, drain it, and then pick it. Some of those actions can be doubled up, but at the very least it takes a full turn to plant the rice, another turn for it to grow, and one more turn to drain it and harvest it. Thatâ€™s half a game to accomplish a single harvest, and it says nothing about actions the player might spend trying to clear weeds and pests that infest the harvest. You could always harvest with the bugs and weeds, but the penalty for doing so can add up in a hurry. Of course, the game throws more weeds and pests at you throughout the game, and other players can even use their Spirit cards to throw more roadblocks in your path. Itâ€™s bad enough that it takes forever to accomplish anything in this game, but as often as not it takes even longer because of meddling from other player and the design itself.

Iâ€™m not really sure who the target audience is here. The game functions and even has moments of inspiration, but it has an identity crisis. There are too many obstacles to the fun stuff for a player like me, and players who really find that process enjoyable will be annoyed at how misshapen the whole thing can become. Itâ€™s pulled in two directions, wanting to be a heavy management game, but also wanting to include strong card effects and clumsy player interaction. It ends up mostly being a chore.