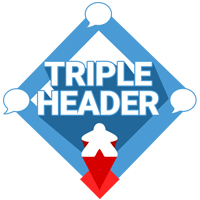 Critical Misses: Increases an already long playtime, some minor overlap between new factions and existing ones.

Michael: It’s been a full year since the three of us got together here in the Review Corner to talk about Gale Force 9’s Star Trek: Ascendancy. I gave it a full five stars and slated it as the best game of 2016. So here we are again, two big time Trekkers and a somewhat confused Charlie.

Dan: Speaking of anniversaries, it was the 35th of Star Trek II: The Wrath of Khan just a couple months back, and to celebrate I went and saw it for my first time on the big screen — unlike Michael, I wasn’t around to view its first run.

Michael: I did in fact see it in the theater when I was 7 years old. We got to the show late and it was right at everyone's favorite ear scene. Totally freaked me out.

Dan: It was possibly my favorite cinematic experience of the year, other than the nerds seated behind me who couldn’t help but squeal the lines a half-second before Kirk, Bones, Spock, and Khan could get them out. Still, it was a sight to behold, and renewed my love for the whole thing, terrible sets and turtle necks and all.

Michael: It's still the best Trek film, regardless. But my favorite part is when Kirk cuts the inspection short. And we are a few paragraphs short of a Motion Picture-class trip ‘round the hull here.

Dan: Moving beyond the nerdy squealing, Star Trek: Ascendancy has finally finally finally been given its first pair of expansions. The original cast of Federation, Klingons, and Romulans have been propelled into Next Generation and Deep Space 9 territory with the addition of the Ferengi and Cardassians. And the big question, of course, is whether this represents the crass commercialism of the former or the empire-spanning labor worlds of the latter.

Michael: It's been just over a year so it's hardly a quick-fire cash in, especially in today's day and age where games release as entire product lines.

Dan: Labor world, then. Michael, since you listed Ascendancy as your Game of 2016, let’s start with you. Have you tried it with five players yet, and did it propel you to Warp 9?

Michael: I have in fact boldly gone. We got what we wanted the most- more seats at the table, breaking that tough three player ceiling- but we are paying for it. It's still a pretty hard 45-60 minutes per player and that is with experience. This keeps the game at a commitment level that many may find even more prohibitive than the three player limit.

But I love Trek, and I love that they went straight for the signature DS9 races. And overall, I really like the minor but impactful new additions to the rule set.

Charlie: It's such a great experience at four and five players but that time cost is a huge roadblock. It feels at once as if the game is most at home with all of that politicking and brinksmanship associated with a more entangled group, so it's a shame it won't see that commitment but a couple of times a year.

The focus of the two expansions at supporting those larger player counts by reinforcing trade agreements and bolstering interaction via the exploration deck is appreciated. Ascendancy feels just a little more exciting and a little more alive with these options and we're all better off for it. The utility of being able to use all of this new content at the existing player count of three also adds value, despite the fact that Ferengi really would like a third or fourth partner to worm their way in with.

Dan: It doesn’t strike me as improbable to play with five more than a couple times a year, but apparently I’m the odd man out. Funny enough, I was the one who raised the objection of Ascendancy’s length the first time we reviewed it, but these expansions have energized it for me. Playing with four or five provides an entirely different dynamic from the original three sides, and it’s less likely to devolve into a constant state of two factions teaming up against the leader. Sticking with somebody even while they’re winning can pay off big, provided you’re scheming a way to use that alliance to your benefit somehow.

Michael: There's simply more to play with when you have two very different factions in the game along with the original three. We still aren't hitting the sprawl of races in Twilight Imperium or anything like that, but I think you are responding favorably to the equivalent expansion of scope that the extra playtime buys you. I think it's mostly worth it. 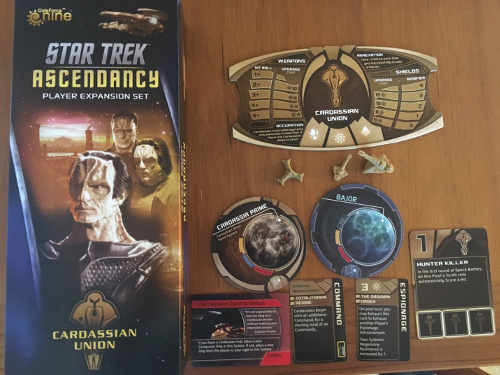 Dan: Okay, so it seems obvious to me that the Ferengi are the better of these two new races, so let’s talk about the Cardassians first. What do you ensigns think of the spoon heads?

Michael: I really like them, and I really like how once again those marvelous lads at GF9 have apparently gone back to that same design principle they used going back to Spartacus - "what does a player playing this faction want to be doing?" And the answer is of course dominating. They are a very _imperial_ faction, focused on hostile occupation. If you've seen DS9, that's exactly what you would want to do.

DAN: Minus the pah-wraith possession, perhaps.

Michael: There are some other cool elements NOT involving that, like their auto-hit combat ability reflecting their more aggressive nature, but I think my favorite piece of their expansion is the brilliant idea of crisis cards putting _other players'_ ships unexpectedly into your way during exploration. Suddenly, you might find yourself in a dangerous standoff, a diplomatic imbroglio, or another very narratively "Trek" situation.

CHARLIE: I love their small, deadly fleets. When introducing them to non-Trek fans I was struggling to explain how they're different than the Klingons in particular, but their focus on invasion and hard hitting compact flights really gives them a distinct personality.

Those exploration cards you mention Michael are fantastic as well. In my previous game we had the Cardassian and Federation player swaps systems and the tension really exploded. All of the sudden this peaceful faction that was perfectly content plucking culture from the trees in their segregated slice of space, now they have an enemy invasion staging ground in their back yard. The whole dynamic and pace of the game skipped a gear and we were off to the races.

Dan: I haven’t had that particular one show up yet, but we did have a jarring first contact moment thanks to the new event cards. A Romulan ship — an exploratory vessel, presumably — popped into Cardassian space unannounced even though they were on opposite corners of the table, and were able to get a colony operating right next to Cardassia Prime. That made for a few tense moments.

Don’t get me wrong, I do like the Cardassians, and I think they’re different enough to stand alongside the Klingons as a way to embrace your more aggressive side. But for my gold-pressed latinum, the Ferengi are where it’s at. 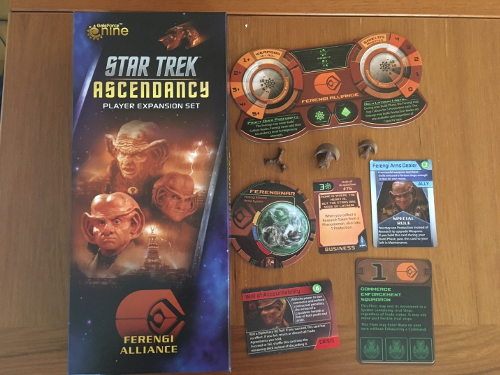 CHARLIE: I would definitely agree that if you're only getting one of the two (which means you're crazy) I'd go with the Ferengi. Their playstyle is completely off-the-wall from everything else we've seen.. You simultaneously want to cozy up with every other player while still maintaining your distance.

They can produce like rabbits but they lack teeth and need to be very careful. Even their developments are oddball in that many let you de-activate the technology of your foes. A massive frown erupting across the face of a Cardassian or Romulan player is oh-so-satisfying.

Michael: It's a smartly designed faction that sorts out nicely how to do a commerce-based civilization in a game more about exploration and conflict. I love how they never build culture (they are quite backwards what with their outrageously sexist attitudes and all) but they can buy it. That is such a Ferengi thing, as is sidling up to your neighbors and getting your ships into their ports. I really like this box too, I think I might like the Cardassians more than you guys though. I'd say both of these sets are well worth it and fans of the setting are really going to appreciate how much they feel like their respective races. And I feel like the new playstyles have a major impact on the way the game unfolds.

CHARLIE: The big question is whether GF9 can keep this up? There's already a bit of overlap in the Cardassians and Klingons, and I imagine it will only get more difficult to uniquely define factions within the boundaries of the system (Borg notwithstanding).

Dan: I've seen some people wishing for all sorts of races, but I'd be content if they added the Borg and Dominion and left it at that. I don't really need Tholians, Andorians, Breen — though I'm not going to complain if we do see them at some point.

Matthew Sabella posted on 1/3/2019 10:42 AM
I've played three games with the expanded universe. Only in the first game was there a "tank rush" effect (by the Ferengi). They were very fortunate in their exploration while the others in the game were less so. It seemed other players were stymied early-game losing fleets to phenomenon or being stuck trying to invade/hedgemonize populated worlds. Plus, in the subsequent games, players paid much greater attention to player-order; bidding to prevent the strongest player from making a blitzkrieg attack.

The game definitely is 50-60 minutes per player, though. This, to me, is a selling point rather than a drawback. There's no "glory of victory" or "agony of defeat" in a game that takes 40 minutes to play. If I lose/win a game that is short - who cares? But if I lose a game I've invested 6 hours into playing, I feel it. Likewise if I win (though the feeling is decidedly better). ;-)

Tom Hazlett posted on 10/23/2017 10:24 AM
Cheers for the review guys. What our small group would like to know is if the higher player count reduces the impact of the 'tank rush' effect - where a player can build then make multiple moves and attacks with his new units before other players have a chance to build their own new units (We found this regularly made the game not unplayable but not-wanted-to-be-played) ?
If so it may move the game off my trade/sale pile.