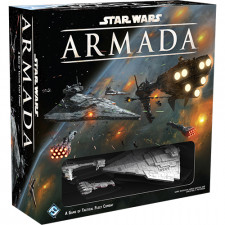 Breathtaking is the chief adjective that comes to mind when one views a game of Star Wars: Armada in session, its capital ships bristling on the table in their still majesty. The Victory-class Star Destroyer dwarfs the Nebulon B Frigate and CR90 like a lumbering giant barreling across a broken plain ready to consume its enemies in fire and ash. More beautiful than even the stunning X-Wing, this whole design just bleeds ambition and is over the top in a way weâ€™ve come to expect from Fantasy Flight Games.

The first thing you need to understand is that Armada may be influenced by its predecessor but it possesses a distinct identity and the feel of the two is discordant at best. Where X-Wing goes for predictive maneuvering in order to expertly simulate that hair-raising split moment decision making of fighter jousting, this new design embraces long-term strategic planning and relies on the ability for a commander to execute decisive grand schemes of coalescing variables with a multitude of moving parts. Less visceral twitching and more armchair chin stroking, this game rewards a different level of engagement and offers something new that separates itself from the rest of your collection.

Thereâ€™s a discernible level of cleverness throughout the design that shows this team is learning and adapting as its forefather continues to grow. Much of the micromanagement is now handled on the base in a fiddly yet practical approach. Firing arcs and positional shielding are smartly adopted in a tactically satisfying way. Gone are the random outcomes generated by defense dice in exchange for a new defensive token system that brings a greater degree of choice to the table.

The maneuvering tool may be the most innovative element of Armada as it features a proprietary plastic armature that clicks port and starboard to quickly and efficiently define yaw and outline a ships capabilities. At top speed you will have a hard time making short quick turns, but you can execute a wide looping U or a hard bank. Meanwhile the Star Destroyer is limited to slower speeds, rolling along like a three legged elephant ready to rend your innards with its tusks. The ships feel realistic and elegantly straddle playability with reverence for the source material. You will be angling along trying to line up the enemy for a huge broadside and struggle to thread between two asteroid clusters. This is capital ship combat as George Lucas envisioned before midchlorians ate his brain.

Inclusion of fighter squadrons at this scale is a difficult and fragile task that this hammer of a game nails. They move rapidly across the board and with a sense of freedom that lies in stark contrast to the lumbering behemoths nearby. Their roles on the battlefield seem well defined as X-Wings really want to bludgeon the capital ships with their Proton Torpedoes while the TIEs want to wrangle them in like cattle to be herded. A canny pinning system facilitates some quality tactical implications that have you constantly to the grindstone attempting to mentally plan out your path of approach and define your strategic scheme. Getting a cluster of X-Wings caged in by a Howlrunner-led Imperial swarm is deadly and punishing. Additionally, the saturation flak-style approach to capital ships filling the sky with turbolaser batteries on overdrive is well-handled and enjoyable to implement. Like every other aspect of this game, the squadrons feel slotted in perfectly as if they were always meant to be right where they landed.

Thereâ€™s no denying Armada is a great game. However, the Death Star in the room is that itâ€™s a prohibitively expensive game. The core set is only enough to play a 180 point affair, which is a little more than half of a standard engagement. It really wants to be treated as a full blown miniatures game where each player brings his own bulked out collection- not a game where one player buys a set for all his friends to play, as is typical in the board games environment.

The ambitious nature of the complicated bases, plastic command dials and tons of plastic make the price of entry enormous. The fact that the cost will continue to climb and outpace X-Wing in due time is also an issue that will likely lead to this game being relegated second duty to FFGâ€™s sister game. You have to really balance this degree of cost with the fact that this design team took no shortcuts and relied on ambition and vision without compromise. This is the game they wanted to make the way they wanted to make it. Banking on the fact that customers will offer up both their arms and both their legs isnâ€™t too a great a risk when assessing the fanatical passion of fans.

In addition to the lack of satisfaction arising from a single core set is the kind of oddly implemented objective system. In a full game each player brings three objective cards to the table, with the owner of initiative choosing which mission will be played from the choices his opponent possesses. This is heavily a taste matter but Iâ€™m enamored with the more structured scenario based play that was always prevalent in Star Trek: Attack Wing but rarely utilized in X-Wingâ€™s design. What eventually leads to disappointment is that some of these new missions are thematically odd and very gamey. You have stuff like scoring bonus points for criticals and controlling territory that do add to the tactical variance but also lead to oddball choices that donâ€™t fit in with the narrative so strongly espoused by the rest of the game. Itâ€™s a bit jarring when Iâ€™m cursing the dice for coming up with crits as opposed to straight hits which would have allowed me to flip a previously received damage card over and award me arbitrarily with an extra 15 points. This sore point is very much highlighted by the fact the rest of the game is so damn good.

As flawed as any other starter for an ensuing endless line of expansion content, Armada does ultimately win you over with fantastic cleverly implemented mechanisms that capture the grandest qualities of Star Wars space combat. Itâ€™s a game I simultaneously curse and swoon over trying to find a way to justify the approaching money pit thatâ€™s coming on strong like winter in Westeros. Brilliant but demanding, this is a great system full of tough and vindictive strategy as well as procurement decisions. Iâ€™d hate to be your quartermaster on this one.