Fantasy Flight Games' Star Wars: Armada - the best Star Wars tabletop game ever made - enters its fifth wave of expansion with a great new assortment of ships and upgrades for both the Imperials and Rebels. And speaking of the latter, those familiar with the excellent Rebels show on Disney XD will be pleased to see that particular corner of the Star Wars universe well-represented in this lot. As a casual player more concerned with how awesome it would be to have Hera Syndulla team up with Han Solo to lead a fleet against an ISD protected by a bunch of bounty hunters than anything to do with the "meta", I'm not the reviewer to come to if you are interested in how this wave will shake up the tournament scene or whatever because frankly I don't care about it. But what I can tell you is what to expect from these additions.

The literal flagship of this wave is Phoenix Home, which comes straight from the Rebels show. It's one of the coolest looking models in the line, as far as I'm concerned, and a great example of extending the Star Wars aesthetic beyond the films. This Pelta-class ship is something like a pumped up Corellian Corvette with an assault and a command configuration. Top speed is only two, but it's fairly maneuverable. The big star of this pack is Ahsoka Tano, one of the coolest characters outside of the films, here represented in her adult years and with a decent ability that lets you swap out command tokens. Commander Sato is one of this set's better additions, allowing a ship with friendly squadrons at range one to replace two attack dice with dice of any color- a cool way to demonstrate fighter support along with upgrades like "All Fighters Follow Me", which increase squadron speed. 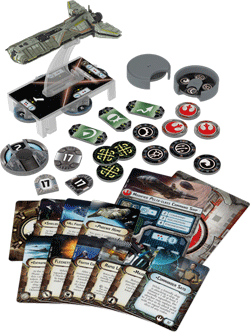 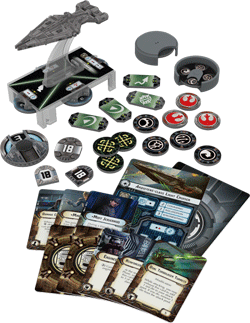 The usual assortment of stuff to justify the relatively high price- but man, these ships are HOT.

The Imperials don't get a big ship this time out - like they need another. Instead, they get the Arquitens-class Imperial Light Cruiser, also seen frequently in Rebels. This is a ship closer in scale and ability to the Imperial Raider. It's agile and packs a big broadside punch- which is kind of uncommon for an Imperial ship. This makes it a great flanker capable of going long. It's not a very durable ship, but it comes with a great upgrade in the Reinforced Blast Doors, which lets you discard three facedown damage cards.

The other two packs are new Squadron packs for each side, and as someone that likes a lot of fighters on the table I was very excited to see more options. The Imperial set comes with two new TIE varieties, the cloaking Defender (which can move out of engagements) and the bomber-class Defender. The VT-49, previously seen in X-Wing, offers Rogue and Counter Attack. Lambda shuttles are especially interesting, providing the Relay ability which can effectively transmit orders from a distant ship to squadrons fighting deep behind enemy lines- and Colonel Jendon, the named shuttle option, can order a squadron to make a second attack. Cool stuff. The shuttles also get Strategic, which moves objective tokens toward them.

Over on the other side of the conflict, the Rebels have swarming Z-95 Headhunters, the E-Wing bomber that comes packed with a nasty Snipe ability, giving them a little more range against squadrons, and the Lancer/Shadow Caster Pursuit Craft. I'm not crazy about that last one, but this pack more than makes up for it with the VCX-1000 Freighter- this is the Ghost, the heroes' ship from Rebels. If that's not enough for you, you also get Hera Syndulla in this pack and she has a great ability, giving Rogue to friendly squadrons and allowing them move and attack. 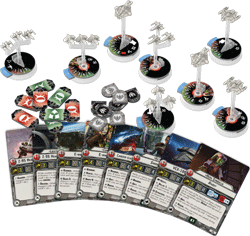 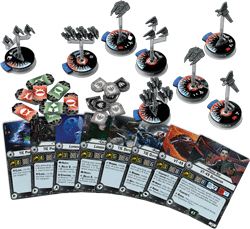 Squadrons are small in scale but add a huge amount of scope to Armada battles.

Now, the big question that tends to come up when talking about Armada expansions is "how many". So if you are going to go in on Wave 5, here's my recommendation bearing in mind that I'm not a "serious" player. I think one Phoenix home is sufficient for most folks, but those that run a heavy squadron fleet might benefit from two. I think two or even three Imperial Light Cruisers is where you want to be with that ship. As for the Squadron packs, I have two of the previous packs and I wouldn't settle for less. But these ships are a little more specialized and feel like they should be less common. I'm also not really sure I need more than one VCX-1000 (which I am always going to run as The Ghost) and I'm satisfied with the two shuttles. So I'm thinking that one of each squadron pack will suit most casual players' desires.

Overall, this lot is a little more straightforward than wave 4, which I regarded as more of an "advanced players" expansion. This means that these additions feel slightly redundant, offering variation rather than variety. For players who are satisfied with the Original Trilogy ships and characters from previous waves and aren't interested in keeping up with the competitive scene, these may not be essential purchases. That said, as a big fan of this game I've enjoyed seeing what these new ships can do and the upgrade cards have offered some interesting options. I am starting to wish that FFG would just cap it off and call it day because at this point I have plenty of choices and lots of ships to make enormous battles. I'm not sure I need for the game to spiral off as X-Wing has into the Scum faction or alternate paint jobs (read: Aces/Veterans). If it all stopped right now with this great wave, I'd be completely happy. That said I'm first in line if they bring out the Hammerhead Corvette as seen recently in Rogue One.