Critical Hits: Classic characters square off in one of the best Star Wars games ever made; great product for beginners as well as collectors; exclusive dice and cards unavailable elsewhere.
Critical Misses: Continues to tow the collectible line, which will inevitably hook if you like the game at all; decks should be at the 30 card regulation minimum.

There's a new pair of Star Wars: Destiny starter packs in the wild so if you missed the previous Kylo Ren/Rey duo or the very excellent two player starter released last year to celebrate The Last Jedi, now is as good a time as ever to get in on this outstanding game. Coinciding with the release of the Legacies booster expansion, the new sets are good introductions to the game and they do add some value to existing collections by offering a total of 18 cards and dice between them that are unique to these inexpensive packages. And they are good cards and dice, representing quite a few iconic characters, vehicles and settings. If you have been lamenting the difficulty in getting a Han or Luke legendary or can't seem to find an elusive Boba Fett and his Slave-1, here's your chance to get them guaranteed without digging through 36 packs of boosters with high hopes. 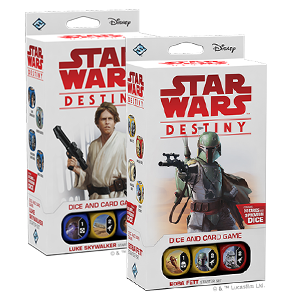 Taken as pure starters, under the assumption that players are new to the game, the 24 card decks aren't "legal" per the rules and of course as pre-cons, there are limitations. But both the Luke (blue and yellow) and Boba Fett (red and yellow) decks are accessible and easy to play. Luke also brings Han and the Falcon, and R2D2. Boba is joined by a Veteran Stormtrooper and has access to wrist rockets, a speeder bike, and the aforementioned Slave-1. Both decks offer a nice range of functions from melee to ranged damage, resource generation, and the new indirect damage mechanic. The rules are extremely easy to parse, and with the included tokens it is quite literally all you need to play the game.

And it is, as me and other Review Corner reviewers have noted a great game. It is fast and fun with plenty of drama, excitement and a decent degree of depth. Most importantly, it feels Star Wars-y and any fan is going to enjoy seeing the classic characters, planets, and gear from the Original Trilogy along with plenty of content from Rebels, Clone Wars, and the latest films. The dice pool mechanic works extremely well and the 15-20 minute games will likely have you immediately reshuffling for another go into the wee hours. Once you figure in the deckbuilding, this is a serious gaming concern that I think represents one of the better collectible games ever put on the market.

But no, to answer your newbie question, I do not think that they are standalone products and no, I do not think that most players will be satisfied with these decks beyond three or four games. But they do give a great taste of what makes the game so good, and I especially like that they focus on favorite characters and offer plenty of identifiable, fun Star Wars proper nouns.

For those looking to add these to a collection, the directive is "go for it". I can't imagine anyone that wants to stay current and up-to-date with the game would want to miss these sets because it is awfully nice getting so many cards and dice that you can't get from boosters. I am also very pleased that Luke and Boba have two dice, meaning that they are available for use in their "Elite" forms. It's been something of a hassle that you have to get ahold of two dice from boosters (or single purchases) to run Elites, so it is nice to buy right into one of these characters. 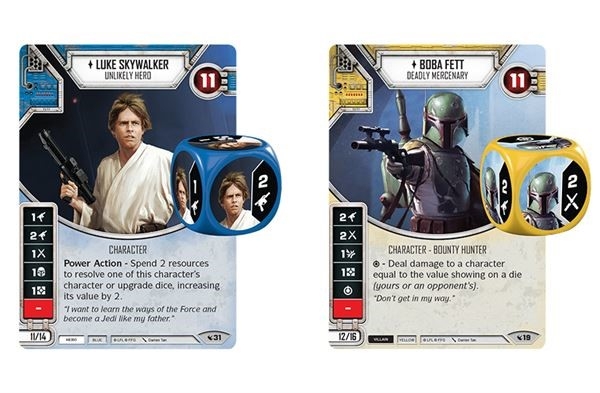 But I can't help but be disappointed that Fantasy Flight continues to push this design - which I would rank among the very best work they have ever done - as a collectible concern. I like the content of these starters, I like that they function well as an introduction and as a way to expand your collection, and I like that they really go for it in terms of giving you some cool and desirable stuff. But if you get into this game, you are getting onto the treadmill of booster box releases and that can be frustratingly expensive- especially if you are not interested in the "meta" and if you are like me want to play the game casually with friends, designing decks based more on the setting than on what is the most successful at the table. Speaking as someone who's frowned a couple of times at a Miniature Market shopping cart with a $15 Ahsoka Tano in it, I would much rather this game be released in themed sets. For example, imagine this game sold in a Hoth battle pack, which would give you two complete decks along with a full range of options to modify them and maybe even a campaign-style way to play. I think that would be much more compelling than dropping another $86.19 on a box of hit-or-miss boosters.

But the reality of it is that the collectible format helps drive in-store play such as draft events and tournaments, and what's good for the goose here is not necessarily good for the gander. With that said, I would advise that anyone interested in this game that has not already take a look at these starters. There is an absolutely fantastic game here that is actually worth the collectible hassle. And if you play casually and ignore what the Internet says are the best cards and decks, then with these starters and a modest booster purchase you might get plenty of mileage out of it. If you're into the organized play scene, then there is also ample depth there to play competitively. Either way, Destiny is Star Wars gaming at its finest.