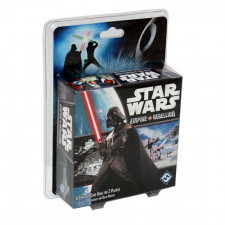 Star Wars: Empire Vs. Rebellion is a very light, rather abstract card game, but it manages to capture some of the beats of the Star Wars movies in about 30 minutes. Thatâ€™s because at its core this is a game about plans- plans to deceive, to overwhelm, or to hold back for the future push. Those plans dictate the flow of the game. In the end itâ€™s a rather slight experience, partially because of its short length and partially because the design limits how well you can execute your plans. But itâ€™s a fun little game thatâ€™s well worth the investment, especially for Star Wars fans.

The players each take a side of the Galactic Civil War. They begin by revealing an event over which they will struggle. This struggle has a point value (seven points wins), in addition to saying how many cards can be played to take it. The most important information on the event is its objective value, showing the strength the players need to hit to take control. Each player then secretly chooses a special strategy that will go into effect if they win the event. The meat of the game involves flipping cards from the player decks to see how close they can get to the eventâ€™s objective value without going over. Each playerâ€™s deck consists of cards numbered 2 through 6. Players also have the option to exhaust a card to use its power after itâ€™s been played, or to pass to see what their opponent will do. If both players pass in succession, the event is awarded to the player who was the closest to the objective value without going over.

Well, it probably is. Remember those secret strategies? They can seriously alter the results of the round. One of them adds to your strength when itâ€™s revealed. Another lets you pick your opponentâ€™s strategy in the next round. The most devious one gives the event to the person who got the lower score, basically making the winner lose. Once the players have internalized the five strategy cards, thinking about what strategy your opponent chose becomes the driving force behind almost every decision. Did they just pass because they are trying to lose on purpose? Are they holding back to suddenly win the event with extra strength from their strategy? Not only that, but strategies only take effect if the player stays under the objective value. If you â€œbustâ€ your strategy doesnâ€™t do anything at all.

The overall effect is a little like a game of blackjack combined with a double-guessing game like Citadels, which is a pretty potent combo. The secret strategies and the simple push-your-luck card play dovetails to create some agonizing decisions. There are times when you absolutely need to draw another card, but if itâ€™s not the specific one you need youâ€™ll definitely lose. But then maybe itâ€™s okay to lose because of your strategy card. And of course, you are asking all of these questions of your opponent as well. There are times when it feels like the game is kind of playing itself, in that the choice is entirely obvious, and rather capricious at that. But those outcomes are part of push-your-luck games, and in a game of this scope it feels appropriate.

Some players might notice similarities between this game and another Fantasy Flight title, Cold War: CIA vs. KGB. Empire vs. Rebellion is almost identical in terms of ruleset, though all of the events have been redesigned and many of the cards are different. Some of the changes are welcome, such as the lower threshold for victory. The original game went to 100 points instead of 7, and even though the objectives in Cold War gave more points it still made for a much longer game. In this version, the game is over in a reliable 30 minutes, though at the expense of occasional games where one player is buried without a chance to recover. This version also adds influence tokens, which allow players to ready cards so their actions can be used again. Iâ€™m more lukewarm on that addition since it tends to draw out rounds and eases some of the tension. Empire vs. Rebellion also has some unique cards for each faction, representing characters from the original Star Wars trilogy. The players add four of them to the deck at the beginning, and there are ways to add more as the game goes on. It is here that the game distinguishes itself the most from its ancestor, adding some asymmetry. Which is better depends mostly on which setting you prefer, since the differences mostly end up being a wash.

The transition to a new setting works. The planning and tension feels entirely appropriate to the Star Wars universe. There are plenty of moments where people will want to say things like, â€œEvacuate? In our moment of triumph?â€ or â€œMany Bothans died to bring us these plans.â€ It helps that this is the one Fantasy Flight Star Wars game that uses stills from the movies rather than illustrations, and the character powers make some difference as well. Donâ€™t expect too much, since this is a short and simple game. Itâ€™s heavily abstracted and there are elements that worked better in the Cold War setting. It also feels rather slight at times, perhaps because losing an event isnâ€™t too big a deal unless it loses you the game. But itâ€™s nice to have a Star Wars game that doesnâ€™t require a core set and a ton of expansions. Most of Fantasy Flightâ€™s Star Wars games are for the experienced gamer, but Empire vs. Rebellion is one that anyone can play.