As if the awesome illustration of reptilian bounty hunter Bossk on the box werenâ€™t enough to excite me, Fantasy Flightâ€™s latest expansion to Imperial Assault is another Twin Shadows-sized add-on instead of another full length campaign like what was offered in Return to Hoth. I very much prefer the shorter campaign format and in this regard The Bespin Gambit delivers. Itâ€™s a spare but decent storyline involving the Imperial Security Bureau and an operative infiltrating this Gestapo-like police force. Beloved rogue Lando Calrissian is involved, and he along with Bossk is also among the Ally and Villain packs featured in this wave.

You get the usual assortment of goods in the box, most notably a great-looking set of Bespin-themed tiles that will please any Empire Strikes Back fan. Yep, the Carbonite Freezing Chamber is here, and so is the shaft where Luke and Vader have their paternity dispute. The new miniatures include the droid-building Ugnaughts (the diminutive pig-like engineers), a couple of Bespin security guys and two new espionage-oriented heroes. One of the heroes is a female Ithorian (a â€œhammerheadâ€ like Momaw Nadon) and the other is a stealth-oriented force user with a â€œshrouded lightsaberâ€. Theyâ€™re pretty cool I guess, but as usual with the made-up/non-canonical heroes they never quite register as legit. You also get the standard cards needed for the campaign as well as the skirmish mode, and as always the skirmish cards add quite a bit to that side of the game â€“ which is always welcome. 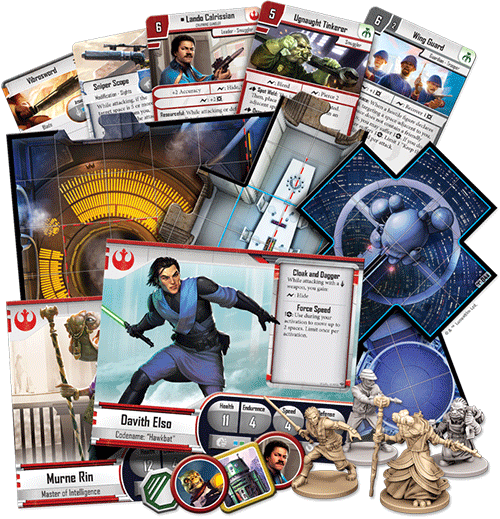 In general, the additions are good across the board and I especially appreciate the attention to character, even though Agent Blaise is about as boring as his name sounds and the ISB Infiltrator pack adds yet another Imperial squad to a side that already has a ton of squads. I love that Lando has a couple of â€œgamblingâ€ abilities that let him futz with the dice and Bossk comes across as a wreckless, homicidal maniac with his Indiscriminate Fire ability. I defy any fan of the Scum and Villainy thing to avoid running an all-bounty hunter gang in skirmish now â€“ or an all-Trandoshan hunting party. The new skirmish missions continue to fail to impress, with more-of-the-same objectives and gameplay concepts. They are useful for putting together balanced map layouts, but donâ€™t look to these to generate anything other than shoot â€˜em up missions. This is fine because thatâ€™s fun, but it isnâ€™t hard to wish that FFGâ€™s designers would get a little more ambitious with what the skirmish game offers.

As for the campaign, there is a Wampa in the room. And that Wampa is FFGâ€™s own Road to Legend app for Descent. Imperial Assault is essentially Descent in Star Wars drag, and in light of Road to Legend itâ€™s almost impossible to play this new campaign without thinking about how much BETTER it would all be if the Imperial Player were handled by an app with all of the innovative automation that it offers. I have never been a fan of Descentâ€™s â€œOverlordâ€ player concept because it adds a ton of overhead, rules and complexity to the game (not to mention time) and it creates this awkward situation where you have one player that can either completely drop the hammer on the players or be a good sport and sandbag so that everyone has fun. The Imperial Player in Imperial Assault is the Overlord, and post-Road to Legend I am ready to see this concept jettisoned from this game. 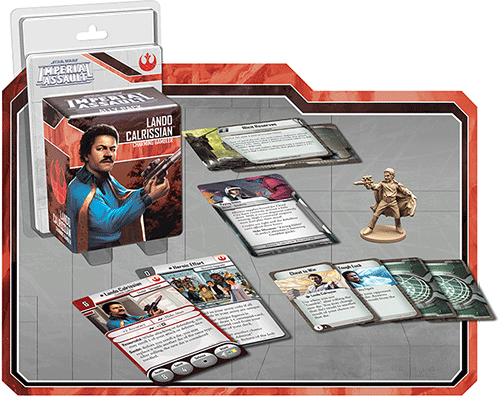 The folks I played through a couple of the Bespin Campaign scenarios all agreed, and they were all friends that have played Descent with Road to Legend. I really hope that Fantasy Flight moves Imperial Assault in that direction because to be quite honest, my interest in another campaign-focused expansion that is going to require me to be the Imperial Player again is approaching zero.

That said, this expansion and the latest Ally and Villain packs are a solid addition to the Imperial Assault line and there is plenty of enjoyable new content. The short campaign is good and the Bespin setting is handled well so those who donâ€™t chafe about the all-against-one gameplay will likely be pleased. Skirmish continues to offer fun tactical battles using the core mechanics and the new units and command cards will definitely shake things up on that end, even if the new missions do not. But letâ€™s get on with it, FFG- Road to Legend app for Imperial Assault, letâ€™s get on that ASAP.