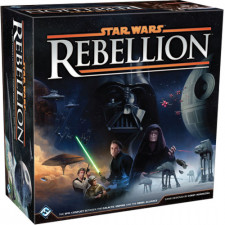 One of the reasons that Star Wars: The Force Awakens was such a smash hit not only with general audiences but also with fans was that JJ Abrams and his team knew that they had to deliver â€œStar Wars as you like itâ€- not some kind of new vision or reinvention. And this is the same guiding mantra that has brought great success to Fantasy Flight Games and their handling of one of the most beloved IPs in popular culture. With Star Wars: Rebellion, the publisher has finally produced the epic, big box game that fans have been demanding and the good news is that it is, again, â€œStar Wars as you like itâ€. This is, in fact, the game you are looking for â€“ and it is the best original game that Fantasy Flight has produced since Battlestar Galactica, which was also designed by the companyâ€™s lead developer Corey Koniesczka. Summed up, Rebellion is an innovative and surprising design that makes one Jar Jar Binks caliber fumble but still manages to rise above it by the time it irises out to an imagined John Williams score.

Rebellion is a two player (or teams) design that naturally pits the Empire against the Rebellion, and it takes its narrative cues directly from the original trilogy. The Empire is looking for the hidden Rebel base, and that is the jump-off point for your DIY version of the story played out across a double-board map of the Star Wars galaxy. The Rebels are fewer in number and must rely on subterfuge, misdirection and careful use of their leadership and heroes to stay one step ahead of the Empire while earning hearts and minds with their actions to turn the political tide. But thereâ€™s only so long that scrappy charm and broken-down spaceships can hold out, and as the game goes on the Empireâ€™s intelligence builds and the net tightens â€“ all while their fleets and armies increase in size.

Each side has concrete short-term goals by way of mission cards, which you put out face down each turn and then assign leaders - folks like Mon Mothma, Grand Moff Tarkin, Wedge Antilles and Wulf Yularen â€“ to them. When they resolve you roll dice based on their skills to determine success, but if the other player puts leaders in the location to oppose you then itâ€™s a contested mission and you need to best the other to win it. Most significantly, the Rebels have a series of staged objective cards that grant them Reputation. Winning these cards moves a reputation marker closer to a time marker, and if the two meet the Rebels win the game.

If that all sounds like the makings of a great Dudes on a Map game to you, youâ€™re only partially on target. It is definitely influenced by strongly narrative games in that genre such as the classic War of the Ring, but there are also elements of card-driven wargames such as Twilight Struggle, worker placement designs and most surprisingly, deduction games such as Fury of Dracula or Scotland Yard where a player must use limited information gleaned through observation and game mechanics to determine a secret objective. Holding territory gives you the ability to build and field more units, but this is most definitely not a â€œtake over the mapâ€ kind of game and it isnâ€™t really about open warfare throughout the galaxy.

So the big battles, in which youâ€™ll line up all of these awesome AT-AT, Star Destroyer, Air Speeder and Rebel Trooper miniatures, are really just a small piece in the larger picture of this game and that is one of the reasons why the kludgy, show-stopping combat mechanics are so egregiously bad. If the rest of the design represents FFGâ€™s house style at its best, the battle resolution is it at its worst. Itâ€™s a boring routine of dice-rolling and card-playing that adds plenty of artificial depth while feeling out of scope with the rest of the design.

If the game had conquest as a primary goal, it would be one thing. But thatâ€™s not what this game is really about and as such it all seems distracting from the better, more compelling parts of the game. I like that there is a division between ground and space units and I like how the leaders are rated in the two types of combat. But the card drawing just slows it all down as players paw over +1 hit, +1 block cards. The game didnâ€™t need cards, dice, combined arms and leadership for resolution.

What is much more exciting is when Princess Leia is sent on a mission to sabotage Imperial production and Vader shows up and defeats her. Then Boba Fett comes and puts her in Carbonite until Han Solo- no, wait- Admiral Ackbar comes to her rescue. Or when Crix Madine and Obi-Wan Kenobi lead a mission to sabotage Imperial production and stymie the construction of a Super Star Destroyer. Maybe youâ€™ll get a chance to send Luke to Dagobah to train with Yoda so you can use the Jedi Luke standee for the rest of the game. Or maybe someone else gets to go. Perhaps Tarkin will lead secret Imperial weapons research, sending out the Death Star when its superlaser is online to destroy Kashykk. Youâ€™ll learn to fear those Death Star miniatures â€“ at least until you get the plans and the one-in-a-million shot to take one of them down. Youâ€™ll remember this stuff. But not the DoaM style battles.

Needless to say, the production is stupendous and the box is packed with lots of illustrations, miniatures, and materials that will make any Star Wars fan feel like their money was well-spent on this expensive title. Early reports were that the rulebooks were bad, but I found that they were among the better that FFG has produced recently. I think the problem was more of a disconnect with the design, with some people expecting more of a Risk-derived conflict game than something more character and mission driven. I love that this game thwarts expectations and plays out more like a big, massive adventure game with distinct personalities engaging in sometimes one-on-one encounters against the backdrop of a larger war.

Part of the genius of this game is that all of the right elements are there, but the ability to remix them is given to the players. Yet it all still makes Star Wars sense even when it is outrageously non-canonical and wholly hypothetical. Part of the fun of this game is in seeing how your what-if Star Wars saga plays out. Maybe the Empire stumbles on to the Rebel base early on, or maybe it goes long and the whole time it was just sitting on Hoth where no one would possibly suspect it. However it all goes down, it feels just right and it captures many of the nuances and tones that are immediately identifiable as Star Wars.