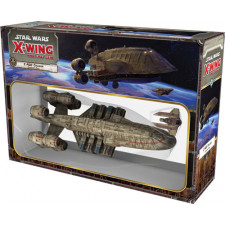 Finally Scum's battle for legitimacy as an X-Wing faction is realized. Itâ€™s no secret that Epic play is my preferred format, and I canâ€™t be giddier to see the most interesting faction the game join the fray. The only question marks that arise with such an expansion are whether FFGâ€™s crack design team can actually manage to make the C-ROC Cruiser feel distinct from its hefty peers. Each of the previous offerings bears such a unique personality and are a treat to fieldâ€”well, perhaps all but the oft-ignored Rebel Transport. Can this smuggler version keep pace?

Why yes, yes it can. But before we dive into that letâ€™s take a look at the back half of this new release. Each of the epic ships is paired with an escort fighter and a swathe of accompanying upgrades. The idea is to sort of ret-con an underperforming ship and bring it up to water level. Such efforts in the past have proven fruitful and the large nudges made to the M3-A interceptor are solid.

This fighter has struggled ever since its release early in the Scum and Villainy life cycle. Itâ€™s a cheap ship but not quite cheap enough. Itâ€™s fragile but tooling it up to hit hard proves too costly. Theyâ€™re fun to fly but youâ€™re never flying them long as theyâ€™re swatted out of the sky with impunity. Well, theyâ€™re still fun to fly but now they have a little more oomph, a little more attitude.

One of the first things to note is the number of new pilots. Seven options is pretty outstanding the abilities are diverse and interesting. Quinn Jast is one of my favorites as it allows you to receive a weapons disabled token and forego shooting for one round in order to flip a missile or torpedo back to available. The fragility of the Interceptor makes it a hefty gamble to invest in ordinance, but zipping around and shoving Proton Rockets into your opponentâ€™s backside is sublime. Iâ€™ll give up my 2-dice native attack any day for another battery of missiles. 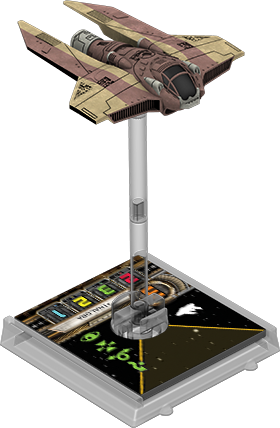 A gnat with fangs.

Inaldra is the other standout as they allow you to re-roll attack or defense dice by sacrificing one shield. Thatâ€™s not very appealing in its own right, but when paired with the new Pulsed Ray Shield modification you have a potent combo at an affordable cost. This new upgrade allows ships with a single maximum shield receive an ion token to recover one shield point. With Inaldra you can fly through the heart of the storm and deliver a solid attack, zip out the other side and then cruise when youâ€™re in safety to recover.

The ARC Caster cannon is also very neat in that it allows for a strong 1-range attack that also inflicts secondary damage on a nearby enemy. It is dual sided and requires charging up, but itâ€™s a neat trick that perfectly encapsulates why playing Scum is so fun, and in this case the Rebels can join in on the fun too.

The final M3-A alterations I want to riff on are the new titles. The Heavy Scyk card appears with its corrected errata granting the extra hull point, which is very nice and necessary. However, the big value add is the new Light Scyk title which reduces your point cost in a similar fashion to the Chardaan Refit A-Wing mod. The Interceptor can no longer equip modifications and receives all damage cards face up (ouch!), but it treats all banks as green maneuvers. This is a neat tool as it lets you field a swarm of gnats to chip away at the enemy. Throw this on Quinn Jast to save some points and fire away with those rockets.

The C-ROC Cruiser is the main event and it does not disappoint. The miniature is hefty and gorgeous with a unique paint scheme that makes it stand out on your space mat. It has solid stats while remaining pretty damn cheap and versatile. While it lacks native punch with no integrated firing system, you can throw a wide array of turret options on it, including the new heavy laser specific to the C-ROC. This is a solid four dice attack that can be boosted with the Supercharged Power Cell upgrade to six dice. Thatâ€™s pretty damn wicked at range 2-3 and able to carve huge chunks out solid targets. 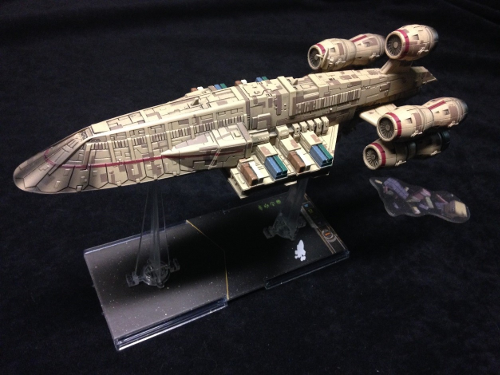 The C-ROC has some junk in the trunk.

The limitations of the C-ROC is that it has less offensive hard points than its military counterparts, which simply makes sense. Youâ€™re going to want to rely on a more subtle and cerebral strategy. This leans on the Scums creativity with options such as the Quick Release Cargo Locks that dump trash onto the battlefield. While this can be difficult to deploy effectively, itâ€™s a riot when it works as you slice a chunk of the battlefield in two and maybe cause a few enemy fighters to crash into the equivalent of a Burger King dumpster. Itâ€™s also worth noting that this upgrade can be applied to the Rebel Transport as well. Itâ€™s nice to see the GR-75 get a bit of love.

Itâ€™s also worth noting that the included cinematic campaign is pretty stellar. You square off against either the Empire or the Rebels along two distinct paths. While most of the missions in X-Wing are relegated to storage, the huge ships have repeatedly presented interesting and creative scenarios for players to engage in. The Scum offering is no different.

Fielding the C-ROC isnâ€™t as awe-inspiring as a fully decked out Corellian Corvette, but itâ€™s still a hell of a lot of fun. You can throw a wide range of crew on board, chuck trash out the exhaust, and rake some stray fire over your opponents. I donâ€™t always have time to carve out an entire day for epic play, but every single time itâ€™s absolutely worth it.