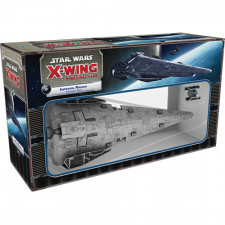 The rolling intro fades into the blanket of stars as the roaring engines of the beautiful Tantive IV cut through the screen. The scale of the pursuing Star Destroyer takes your breath away as bolts of supercharged energy are flung back and forth with reckless abandon.

My body and soul yearn for this. Star Wars: Armada was pretty but it didn't reach the heights of brilliance that X-Wing has claimed. We may not have a Star Destroyer but now we have the next best thing - an Imperial Raider class corvette.

Wait, what? No, you've never heard of this huge ship before because it's a completely new design fabricated by Fantasy Flight Games. It's not from the deprecated Expanded Universe or from the new Rebels show, but it is absolutely amazing. Aesthetically it comes across as a sleek small scale capitol ship with extreme anti-fighter capabilities built in the wake of the Death Star's destruction. It fits neatly into the lore and this miniature, wow, it takes your breath away.

We've already seen and been playing with the fantastic Rebel Transport and Tantive IV, engaging in massive 300 point epic games that can take up to three hours. Now we have an equally impressive foe to dwarf the opposite end of the battlefield.

This ship fills the same niche as the Tantive, functioning as a large weapons platform with a capable main cannon and multiple hard-points for customization. The package includes a large number of upgrades and crew and you are able to fly numerous configurations to achieve your bidding and sow maximum carnage. I'm partial to the new Ion cannons that inflict a critical in addition to the ion damage, potentially crippling enemy spacecraft at long range.

One notable difference here from the aforementioned Rebel equivalent is the focus on a triangular fire-arc extending dead ahead. The Tantive relied on lining up broadsides for its secondary weapons while the Raider will want to keep its sharp nosed pointed into your gut to pour all of its fury into your fleet's soft skin. It still feels unwieldy and slow when lumbering across the table but you will need to maintain a critical approach to maneuvering and rely on intuition to maximize your frontage in the wake of enemy scatter formations.

This release also comes bundled with a seemingly subtle change that's nearly as impactful as the Raider is upon the battlefield. With a little title called TIE Advanced/X1, we can now equip the incredibly solid Advanced Targeting Computer to all of our existing TIE Advanced models, as well as the new miniature included in this package. This upgrade allows you to cancel out your TIE Advanced attack dice and instead deal two automatic hits. The fact that it comes at a cost of zero points is ridiculous and instantly brings a ship back into the fold that found itself over-priced and underutilized far too quickly. You can now gleefully sling Vader or even a generic pilot across the battlefield with a large grin. The ballots are in and Marek Steele and company have finally made the Imperial All-Star team.

If you want these shiny new toys to rejuvenate your geriatric TIEs without throwing down large coinage for a baby Star Destroyer, you are indeed out of luck. Much like the packaging of the Tantive IV, players will find themselves possibly picking up this ship just to utilize a subset of components. The sting is lessened by the inclusion of four X1 titles and multiple upgrades, but the wound still burns when you rub it.

This cavity is drilled and filled by the sheer over the top joy of huge ship on huge ship action. You'll quickly forget how much you paid for those four targeting computers the first time you charge forward with the Raider and spearhead a flanking maneuver into the bright Tantive. My first epic match in this format was a punch in the gut and I never quite caught my breath. Flights of TIEs darted between the behemoths with X, A, B, and K-Wings scattered about launching ordnance and exploding in snappy thunderclaps. I even ran over a poor Academy pilot like a beached whale unleashing friendly fire, but losses were minimal and amusement was maximal.

I cannot stress this point enough that anyone with an ounce of interest in Epic play needs to get this beast to the table opposite a Rebel fleet. It redefined how I think of this game and brought it to new heights, like a Price is Right mountain climber yodeling at deafening volume.

My expectations for the Imperial Raider were at a healthy level. I was not adequately prepared for the parade of destruction it would sow on my table. Every time this game starts to slip the mind or fade into the background, a large sledge connects with my noggin sending me careening to the floor like an expensive piece of Rebel starship whose orbit is rapidly decaying.