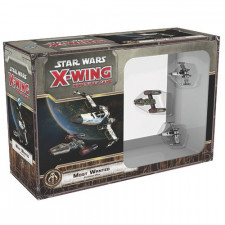 That first time you saw that line of bounty hunters and degenerates eyeballing Darth Vader all your childhood career aspirations were snuffed out like a torch thrown into an insidious pool of water. You were ready to trade in your fireman hat, your police baton and your astronaut helmet for some Mandalorian armor and a blaster carbine. X-Wing's Most Wanted expansion is all about fulfilling your dreams and living up to that loaded phrase your parents kept uttering about being whatever you want when you grow up.

This large release is the de facto starter set for X-Wing's Scum faction and it's ushered onto the scene with much fanfare and anticipation. While this group features several new ships to enlighten the imagination, Most Wanted is aimed at providing value and reusable practicality over fluff and sex appeal. The goal here is to offer huge bang for your buck and get you up and running with a fully fleshed out force for minimum expenditure. Fantasy Flight Games accomplishes this by repurposing previous released material and stretching the limits of past offerings.

In addition to the enticingly repainted Z-95 Headhunters and Y-Wing, we're given extra dials for both of these ships along with the HWK-290 and the Firespray. Ultimately this means you can be building Scum lists and flying competitive 100 point forces immediately upon unboxing as long as you were already deep into X-Wing and supporting both factions. While the required expenditure to start fielding this new faction as your very first foray into the game isn't exceptionally cheap, the value here is for the pre-existing fans and FFG have done a masterful job in making the adoption of a new force painless. Their effort here in not completely milking the customer with initial repainted minis packaged with the necessary dials is well thought out and a clever move to earn early acceptance of this new path.

The Scum faction in general is not a force built on interlocking synergies quite as extensively as the Rebel and Imperials. Building such lists is certainly possible, but many of the ships and abilities sort of provide independent strength and isolated brinksmanship while adopting new and interesting abilities. The faction primarily has a "trick up your sleeve" flavor with new upgrades such as the Hot Shot Blaster that allows for a single 360 degree three dice attack or the Dead Man's Switch that causes a downed vessel to self-destruct and damage all those in proximity.

The new pilots included follow the pattern of doing new things with old toys in interesting ways. N'dru Suhlak is an exceptional Z-95 jockey who gains an extra attack die when Lone Wolfing it, making him an exceptional Cluster Missile carrier and flanker. Boba Fett specializes in getting in the enemy's face, gaining power when in close proximity to enemies and allowing for tense and exhilarating bull rushes. Firespray pilot Emon Azzameen is the bomber specialist due to his ability to use a three length curve or straight template when dropping his ordinance.

What's also fascinating is the included boost to Rebel forces due to some love given to the Y-Wing in this expansion. The new Bomb Loadout upgrade allows a tricked out Y that can shell enemy forces with a dastardly placed Proton or Proximity drop. The BTL-A4 title also allows these lumbering creatures to make a second turret attack after committing to a primary weapon roll. The catch is that you now can't fire outside your fire arc. So instead of lazily sloping around the battlefield and Ioning stray fighters, you can run up the gut or down a trench and deliver the pain.

One of most clever inclusions is the repurposing of the Astromech upgrade slot to a Scum only salvaged variety. The Rebel Astromechs provide some solid albeit boring effects yet this new take goes for a more wild approach that allows for the creativity of the design team to bubble to the brimming surface. R4-B11 is the top cut which lets you spend target locks to force your opponent to re-roll defense dice. "Genius" is pretty slick too, allowing you to drop a bomb after you move which dovetails perfectly with the aforementioned Azzameen. Finally, you have to love the R4 Agromech which functions kind of like a wilier Fire Control System. All of the options provide punch and underline the sort of no holds barred direction of the expansion.

There is no arguing that this is one of the most interesting expansions released for X-Wing yet. Before we've even gotten to the new Scum models it's hard to not be impressed with the variety and scope of this fresh direction. When you cobble together minimal buy-in with maximum imagination you're not left with a TIE/X ugly but rather a sleek and efficient vessel bristling with teeth the size of a saber tooth tiger.