While it may not be a popular opinion, I wholeheartedly believe Rogue One is the best Star Wars film since Return of the Jedi. With such a positive reception comes a palpable excitement for new toys. Luckily for us, FFG is here like a fat man in a red suit delivering the goods.

The TIE Striker is the new atmospheric fighter we see in the battle at Scarif which seems to function like an aerial TIE Interceptor of sorts. Its elongated bird-like profile theoretically allows it to function without the hindrance of wind resistance that a standard TIE would encounter. It's a beautiful looking spacecraft and the miniature depicts it wonderfully, even including wing panels that rotate up and down slightly.

From a game-play perspective the Striker struggles to make a case for itself. There are some interesting ideas present in the expansion, but for the most part it's just another small Imperial fighter. Sure it boasts a nice three attack value but slight mathematical tweaking doesn't do much to capture the thrills.

Its most interesting quality is the included adaptive ailerons title card. This forces you to make a 1-speed straight or turn before revealing your dial each round. One of the included pilots does make this maneuver optional, but for the most part this will add some scoot to a ship that otherwise has a somewhat pedestrian dial. This is a fun maneuver, functioning sort of like a ship dropping from cloak, but it's not quite enough to make it worth adding to your squad. 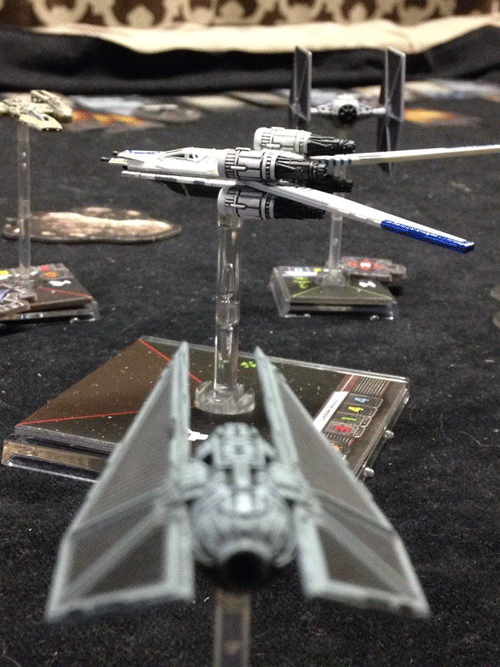 Unfortunately the cheapest version of the Striker with an Elite Pilot Talent slot is 20 points as well, meaning you can't swarm them with Crack Shot. The new Swarm Leader skill partially makes up for this sleight, as it allows you to eke out some farther attack power from your flighty ships that perform evade actions. I can see this EPT finding its way to TIE builds in the future, yet I'm not sure that's enough to justify acquiring this expansion pack.

The U-Wing is the bigger of the two releases, in terms of actual physical size and game weight. It's featured more prominently in Rogue One and it comes with a host of crew members and options. The ship itself is stunning, featuring that integral wing folding action and a great profile. It just looks fantastic on the table and you'll want to include it in your Rebel lists for pomp.

The folding wings also have a mechanical purpose. Depending on their locked in position, the U-Wing either benefits from an additional defense die, or it gains the ability to rotate 180 degrees when it performs the 0-speed maneuver. This is a pretty slick and thematic way to integrate the two maneuvering states. Unfortunately it doesn't prove all that effective in actual play.

The ability to rotate is great, but typically in a tight 100 point game you want to alter facing at the drop of a hat and in the thick of it. Losing that defense die to gain the ability to flip your heading is a heavy cost. The U-Wing is pretty sturdy with four shields and hull, but with concentrated fire it will still fall fast.

Similarly, it's great to see cast members of the now iconic film appearing as pilots and crew, yet they're all very so-so. Jyn allows you to spend an action to pile up a few Focus tokens on a single ally in a flanking position. That can be solid and allow for some nifty combos, but it leaves Jyn's ship helpless and in a vulnerable state since you gave up your action. Baze is somewhat more generally useful, allowing you to perform a second attack if your first misses. Cassian and Bondhi also both have solid pilot abilities, but generating maximum effectiveness for the 30ish point slot this ship fills in your fleet is challenging.

The design space utilized with the U-Wing is pretty clever as it's a support ship with a viable primary weapon attack--much like the Lambda--but it requires allies to be in close proximity functioning as escorts to chain abilities. Thematically that's great, but tactically it's a difficult beast to build powerful synergy around. 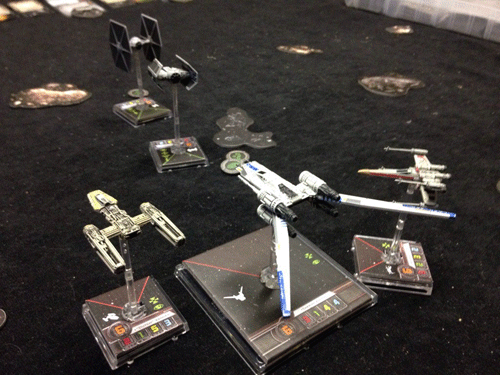 The real issue surrounding the U-Wing is that it functions as a heavy insertion craft in the film. It's very similar to the UH-1 Huey helicopter that was made famous in the jungles of Vietnam--hit the ground in a middle of a scene of chaos and lay down some covering fire before getting the hell out of there. X-Wing is a game that has no ties to the ground and thus pigeon-holing this ship into a proper role is problematic.

The end result is that these two ships offer a mixed bag. Their primary asset is that they let you go "pew-pew" with some plastic toys while Rogue One is freshest in your mind and at its peak. I would have really preferred for a small boxed expansion similar to the new Armada Corellian campaign set. One that allowed for new atmospheric/surface battles to be fought with interesting missions like inserting a commando team or bombing key ground targets. In such an exciting environment the U-Wing and TIE Striker may have found a purpose. In the vast black of your 4'x4' space mat, they both flounder just a tad.