With the release of the Quadjumper, Upsilon shuttle, and Sabine's TIE we now have a complete wave 10 for Fantasy Flight's long-running X-Wing series. Just take a moment to marvel at the fact that we are into the double-digits in expansion set releases and the game is still going strong. The designers haven't emptied their creative banks and it hasn't quite jumped the shark just yet. The game may have grown in awkward and unpredictable ways, but it's still a hell of a lot of fun.

I think we need to recognize that this second half of this wave is much stronger than the first. The U-Wing and TIE Striker simply didn't offer enough punch and identity to warrant going out of your way to pick them up. However, each of the three new ships offers creative tactical vectors and clever opportunities for tomfoolery. I dig this trio like Vader digs giving a good phantom throat massage.

Despite my affection for this release, letâ€™s first clear the air and get the bad news out of the way. X-Wing has certainly gotten away from its roots of being a simple and straightforward dog fight experience. That stack of upgrade cards has ballooned to gigantic levels and wave 10 is not helping. Things have arguably gotten worse with the new condition mechanism.

Condition cards are new unique status effects placed on opponents. Sabine's TIE offers a Captain Rex inflicted condition called Suppressive Fire. You give this to a target and they have a -1 attack modifier against anyone except Captain Rex. This stays with them until they attack Rex directly or he dies. Kylo Ren from his Upsilon-class shuttle nails you with I'll Show You The Dark Side. The First Order player searches through the damage deck for a Pilot-type critical of their choice and places it on the condition card. Next time the target is dealt a critical you take this card instead of drawing from the pile. This can be brutal as the handpicked effect can really inhibit your effectiveness. Totally fun though if you're the emo Sith devotee.

These condition cards in and of themselves aren't too complicated. They're an extension of the tokens placed on the table for the standard actions each round. Instead of a universal effect that everyone recognizes, they offer a specific ability tied to the card. The problem is that these introduce even more combos and messy synergies that you must keep in your head or at least take into consideration when playing the game. The design continues to grow in that card-based combo direction as it takes up more and more cognitive power simply to get to those excellent dogfighting moments. From a competitive perspective I think this is a necessity for the meta. For the vast majority of casual X-Wing players, it's a bit of a nuisance. But man, these abilities can be fun.

Let's get back to the good stuff. Each of these ships is excellent. The miniatures are crisp and highly detailed, including the ridiculous paint job on Sabine's TIE. They each offer different playstyles and don't overlap too much with prior releases. 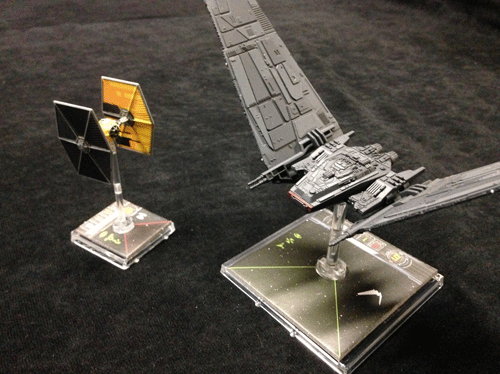 Nothing to see here, move along.

The Upsilon shuttle hovers closest to redundancy, but it offers unique crew and abilities to power its way onto your table top. It comes with a huge suite of cards to play with and include in your builds. The sheer amount of upgrades and strategic variety due to builds is quite enjoyable.

The Quadjumper is a vessel you'll balk at. We don't even see the damn thing fly in The Force Awakens. Yet, it arrives with some novelty. The primary asset of this ship is that it can fly backwards. Yeah, I'm not talking about a Koiogran loop; it can actually fly in reverse and back up. Like much of the scum ships, it's probably more fun than effective and you need to be content with that going in. Take solace in the fact that it will find its way into your Scum lists due to its relatively cheap points cost. And it can drop bombs. Even pacifists love dropping bombs in X-Wing. 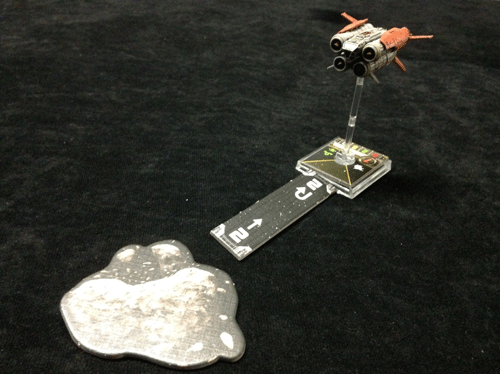 Sabine's TIE is the MVP of the wave. Besides boasting that splendid paint job, it offers a really unique spacecraft for Rebel players to fiddle with. Playing with Imperial toys as a Rebel captain is fantastic of course, but the captured TIE modification is where it's at. With this upgrade you can't be attacked by enemies with a lower pilot skill until you have opened fire. Those dolts fighting for the dark side haven't quite figured out that you're an enemy so you can dance across the black and leave yourself vulnerable with impunity.

I'm also a huge fan of illicit upgrades, so it's necessary to shower the love on the Sabine's Masterpiece title. This lets you equip those Scum-centric gadgets along with a crew upgrade. The result is that it opens up the potential of the ship quite a bit as it gains enormous flexibility. This also means the available builds featuring this craft are pretty wild, affording extended table time and replayability from an exploration perspective.

Despite the growth in complexity and loss of the antecedent's vision, I'm a big fan of this triumvirate. If you can live with the condition cards and heaps of upgrades, pick these ships up immediately and start tinkering. Although good luck getting them to the table as you'll spend a great deal of time simply agog at their visual achievement.