Wave IX sounds a little crazy when you see it on paper. It's hard to believe this game has been trucking for that long. Yet, X-Wing has managed to avoid feeling long in the tooth and still comes across as quite fresh in 2016. Every time I break out a handful of ships and we scoot across the table blowing the hell out of each other, it brings the excitement.

But what does wave IX specifically bring? Primarily, fun with firing arcs.

This new set of four ships is focused on messing with standard firing arc conventions. It's all about tail gunners, turrets, and attack positioning. These ships are all interesting and worth deploying, but nothing here feels like a game changer in terms of offering a drastically different feel. This is more about tweaking of options and adding nuances to explore.

The first ship in the wave is also the first inclusion of a prequel fighter to the mix. While I don't want this game to get anywhere near the prequels, the design and miniature of the ARC170 is quite stellar. It boasts a beautiful paint job and the narrative of a handful of them being retrofitted to fight for the Rebellion mostly makes sense.

In terms of its capabilities as a fighter it doesn't particularly stand out. It's a slower, heavier craft that sits between an X and Y-Wing in capabilities. Its maneuverability is solid at short distances but weak at high speed which gives it a lumbering feel.

The Alliance Overhaul title is where things become interesting. It boosts the primary cannons to three attack, but more importantly it lets you change an eyeball to a critical when utilizing the tail gunner. That provides for a more interesting fighter where it operates sort of like a B-Wing (slower, heavier hitter) with a rear-gunner option.

It's also worth noting that the ship features pilot Shara Bey, Poe Dameron's mother. She flew as Green four during the battle of Endor and having her to slaughter Imperials on your table is a nice little add.

The Special Forces TIE brings one of the more iconic Force Awakens scenes to your gaming table. You can now fly a dual-seater TIE that can hit hard with a turret and features a robust defense. This is an slick option for Imperial/First Order players because it looks and quacks like a zippy Imperial starship, but it's not exactly your mother's TIE fighter.

This craft features one less agility than its counterparts but gains two additional shields. From an offensive standpoint this thing blows the FO TIE out of the water. Similar to the Alliance Overhaul, the Special Ops Training upgrade lets you boost your primary attack while supplementing your turret's effectiveness. Here, you can forego the extra die to your primary to make two attacks-one from the main guns and one from the auxiliary turret. It feels pretty damn good to fly into a cluster of enemies and rattle off two shots at bypassing ships. You can even loose ordnance from its missile bay and cackle as your expensive warhead either fizzles or wreaks havoc. 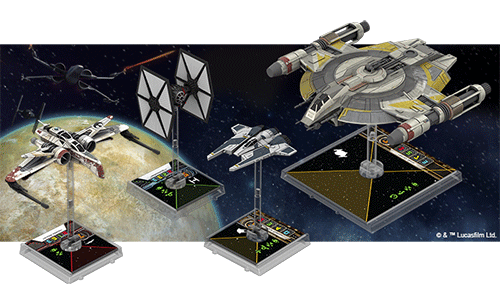 Now we get to the Scum. These two ships are the real champions of this wave and what should be focused on. The Protectorate fighter is a little Mandalorian ball of hate that I absolutely adore. It has no shields and appears as a standard arc-dodger until you look closer. What makes this ferocious beast so cute is that it wants you to run face first into your enemies like a charged fist.

Nearly all of its pilots feature head on rushes with strong offensive capabilities. The Concord Dawn Protector title further defines this ships personality. It lets you add an evade result to your defense rolls and combos nicely with the aforementioned pilot abilities.

The new Elite Pilot Talent Fearlessness is custom made for this wasp. If you are head to head in your opponent's firing arc you add another hit result to your total. Flying several of these in unison is a blast. You get to weave by asteroids and then link together with wing-men for a death star run right into the bridge of your enemy's nose.

As a whole, this craft is really what I wanted out of the M3-A interceptor. That ship never really lived up to its potential and struggles to find itself on playerâ€™s lists. That problem will not afflict this wild devil.

Coming in just behind the Protectorate Starfighter is the mighty Shadow Caster. This large ship, like the Mandalorian snubnose, comes from the fantastic Star Wars Rebels television series. It's relatively agile for its size but is lightly shielded so it feels somewhat different than the YT-1300 or Lambda.

Ketsu Onyo is the spotlight pilot here. She can dish out free tractor beams-everyone loves tractor beams-to ships that are in her primary and mobile firing arc.

Yeah, the Shadow Caster has this weird new turret that is slow to react. The pilot of the ship performs dual functions as the gunner and captain, thus sacrificing speed and reaction for increased tactical options. As an action, you may swivel this small token around the base of the large ship which provides for an auxiliary arc extending out from that direction. It's basically a turret but you can only fire through one of the four faces and must spend an action to adjust it.

While this makes the ship less deadly than a typical turret monster, it's also a pretty cheap spacecraft. I also have to admit this mechanism is simply more fun than what we're used to. It relies on skill, precision, and predicting opponent's movement patterns. This is the heart of X-Wing and what makes it such a great game, so it's excellent to see this new turret mechanic linked so strongly to that element.

The two Scum ships really make this wave worthwhile. The ARC170 and Special Forces TIE are certainly nice, but they donâ€™t stand out amid the dozens of X-Wing releases weâ€™re up to at this point. The shakeout is that, as a whole, this wave is solid but not particularly special. These spacecraft will give you some good firepower and options but theyâ€™re not going to flip the game on its head or blow your mind. Luckily, X-Wing is so unmistakably special that it doesnâ€™t need to be firing proton torpedoes into your skull every release.