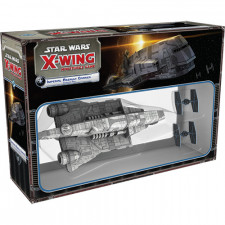 Let's face it, X-Wing has started scraping the bottom of the barrel. TIE Punisher? K-Wing? Imperial Raider? These are all worthy additions to your table in terms of capabilities, but they lack cinematic context, a quality that is responsible for at least half of this game's appeal. With the launch of the Gozanti-Class Assault Carrier we have had that thematic connection restored, even if none of us grew up watching it tear through space chasing the Skywalker siblings.

This is not the only ship that will be coming from the excellent Rebels animated television series. The next wave will feature Kanan and the gangâ€™s Ghost VCX-100 and the Inquisitorâ€™s TIE Advanced. The fact that we have relevant Star Wars material pumping out options for X-Wing is really breathing a new sense of life and vitality into this game.

This is a large package worthy of its cost. You get the huge-sized Assault Carrier as well as two additional standard TIE fighters. The sad truth of the matter is that anyone who plays Epic can always use more TIEs, so we welcome these with open arms. When you stumble upon the fact that the carrier model can actually physically mount these TIEs on its undercarriage clamps - pure awesome. This isn't practical to mount and un-mount during play, but it's a great aesthetic option that lets you spike the visual content of your tabletop.

On the TIE front we get some new named pilot options such as Wampa who lets you cancel all attack die results, dealing a face down card to the defender if you cancelled a critical. Youngster is the most enticing as he lets friendly nearby TIE pilots utilize his Elite Pilot Talent slot if he has a card that grants a special action equipped. This isn't quite as strong as it seems as the EPT pool doesn't offer many options currently (an Expose-fueled armada didn't fare as well as it sounded), but it's interesting and worth keeping an eye on.

Agent Kallus is the most noteworthy upgrade in the deck, particularly because of his recurring role on the aforementioned Rebels. Awesomely enough, you choose a single enemy ship to be your nemesis at the beginning of the game and may convert Focus rolls to hits or misses when attacking/defending against it. Slapping him as a crew member on board your Assault Carrier, Imperial Shuttle, or Decimator is a whole lot of fun. You get to point at a ship and give it a stiff middle digit from the onset.

The wealth of cards included also offer some new options to Epic ships on both sides of the war. The five point Ordnance Tubes are my favorite inclusion, allowing unlimited missile and torpedo fire from your oversized vessel. It's like having a dumpster full of fireworks and no cares in the world. We also see stuff like Cluster Bombs which offer close range counterattacks, a dual laser turret that mimics a standard three range turret attack for a minor amount of points, and the docking clamps necessary for the Carrier to haul TIEs into battle.

The docking mechanic is pretty simple and reminiscent of Bossk's Z-95 being launched from the Hound's Tooth. TIEs that are a part of your build may start the game docked on the Gozanti cruiser. They all must be of the same ship type though, which is restriction that limits strategy somewhat. They may eject from the front or rear of the ship any round after it moves and immediately take one action.

This is primarily interesting from a strategic perspective because it lets you delay deployment of forces until you can maximize their effectiveness. It's certainly situational and not always beneficial, but it's a tactical option that we haven't seen really in the game yet. In my plays it's primarily found effectiveness launching a bomber or two out its rear after the first pass to pound the hell out of Rebel ships on the flyby. This will work occasionally although timing and keeping the Gozanti alive during the initial push are the most crucial aspects of the gambit. Sometimes though the TIE evacuation works miserably as you spend too much time trying to line up the vessel or worry about deploying the secondary attack and it costs you momentum on the main thrust.

One element to add survivability to the huge ship so you can make that push is the new Construction Droid, which lets you repair hull damage when restoring shields. That's crazy as it works like a souped up R2-D2 on the malware equivalent of crack. It's already tough punching through the tough exterior of these enormous ships but when it can repair a damage card and several shields each round you are golden. The only way to trounce it with this build is through heavy sustained fire over repeated turns.

This viability of the Assault Carrier as a sturdy frontline unit to soak damage, a missile carrier thinking offense, or a rear-ward command vessel highlights its ultimate utility. It's the most versatile of the Epic ships and really allows a customization we haven't felt before. It's consistently full of surprises and very fun to field, even if it's not quite as easy to dominate with as the Tantive IV or Raider.

And thatâ€™s really its main issue; the Imperial Assault Carrier often is more fun than it is effective. It can be difficult to squeeze maximum potential out of its build and itâ€™s never quite as impactful or terrifying as the upper echelon of this play mode.

In terms of raw comparison this would slot in closer to the Rebel transport. It doesn't have quite as much hull or shields as the biggest of behemoths, but it also doesn't eat up nearly as many points. It can be quite a bit more offensive than the GR-75 though as it has a legitimate hardpoint and can throw the mighty potential of cluster bombs at nearby enemies. This comparison also highlights its limited effectiveness as the Rebel transport is not taken to battle nearly as often as the Tantive.

Regardless of how you field this freighter you will find it enjoyable to play. Flipping through upgrades and weighing your options on how to outfit such a large ship is nearly as fun as lumbering across the battlefield. Epic play is X-Wing at its best and this ship certainly adds to the overall climate of satisfaction.