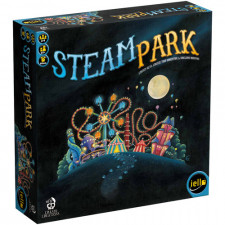 When I think about amusement parks, I recall fond memories of family outings. They also remind me of exhausting heat, long lines, disgusting restrooms, exorbitant prices and puking on the Scrambler. Mostly itâ€™s fond family memories. Steam Park lets players build their own mini-Disneyworld, but not like any other park youâ€™ve visited. In fact, these thrill rides are for robots. Fittingly enough, the game is accessible to the entire family â€“ without the heat-stroke, crowds, smell, cost or bodily fluids.

Steam Park is a dice game with two Jekyll-and-Hyde phases. First, you frantically toss dice in a real-time race against others hoping for a great roll. In the second phase, you use those results to build your park, attract robotic visitors, keep it clean and fulfill bonuses.

The word â€œdiceâ€ can send many a hardened gamer running. True to form, Steam Park can be arbitrary, obvious and seem as if results come cheaply. Those inadequacies are not completely detrimental here, though. It fits well within the designâ€™s style and weight. Plus, there are mechanics to mitigate bad luck and enough choices to sustain an absorbed interest. It may not be as intricate as more complex titles that use dice like To Court the King, but it is more involved than other popular designs such as King of Tokyo.

The first phase can be frantic and nerve-wracking. Itâ€™s a rolling showdown in which youâ€™re focused on your own results, yet nervously watching others out the corners of your eyes. At least the dice are light and wooden, which helps to stifle the cacophony. Nonetheless, it can be tense for younger kids, despite the designâ€™s general family accessibility. As long as other players are still rolling, you can keep tossing any of your dice that you wish. The first one satisfied enough to stop grabs the best bonus token. Rewards diminish after that until the last to finish actually incurs a penalty. So while you typically start with an idea of what you want, the pace tempts you to alter those choices on the fly, if nothing else to avoid that penalty.

Players resolve those icon results in the second phase. Tools let you build rides. That makes a mess, ostensibly, so shovels will prove useful for waste management. Accumulate too much dirt and you lose points at the end of the game. Iâ€™m not a fan of this element. Designs irritate me when forcing an arbitrary penalty system but for no other apparent reason than to have one. Here itâ€™s compounded by the fact that it is tied into the victory objectives. â€œHere,â€ Steam Park teases, â€œbuild these rides to earn money. Oh, but Iâ€™m also going to penalize you!â€ Then it laughs maniacally.

You can also build stands, which provide ways to mitigate the designâ€™s more arbitrary features. There is a puzzle element to building rides and stands. Attractions may not abut ones of a different kind. Only rides of the same color and stands of similar type may be adjacent. As your personal park board is no bigger than a county fairâ€™s midway to begin the game, real estate is premium. To grow, you must expend a die icon to add just a tiny 4x4 expansion. Thatâ€™s about enough space to squeeze in another port-a-potty. Thankfully, it adds up and youâ€™ll soon look more like the Magic Kingdom.

To earn money, you must attract visitors and fulfill bonus card objectives. The former involves using the appropriate die symbol to pull a meeple from a bag. If you draw a color matching one of your rideâ€™s available seats, itâ€™ll hop aboard and youâ€™ve earned its loyalty and money for the rest of the game. Bonus cards require certain stipulations. When youâ€™ve met them, you can use the appropriate die icon to cash it in. Game play paces well with hardly any downtime and â€“ at six rounds â€“ it rarely outstays its welcome. With simultaneously dice rolling and simple action resolution, players remain engaged and never bored.

Still, Steam Park is random. As a dice game randomness is inherent to the design, and some might summarily dismiss it for that alone. You may not get the rolls youâ€™d like or pay too dearly for the privilege. You draw bonus cards which is not ideal as some are easier, better or more situational than others. Then there are visitors to attract â€“ pulling them blindly from a bag. Thankfully there are ways to alleviate this somewhat. Before pulling meeples, you add a number of your choice, hopefully stuffing it with colors you need. Stands improve your chances of attracting visitors, change die faces and clean up extra dirt. These all come in handy.

The components are nice quality and eye-catching. The rides â€“ some assembly required â€“ have an attractive 3-D element which is highlighted by whimsical artwork from Marie Cardouat of Dixit fame. Theyâ€™re even functional with visitor robot meeples sitting atop them. Aside from the rides, there are a lot of other tokens â€“ much more than typical of a simple dice game. Not surprisingly, therefore, Steam Park has a high prep and clean up time. Most everything else is standard issue. However, all money token denominations have the same back for secret scoring and are a pain in the clockwork rear. All said, the game will draw a lot of attention to its table.

Steam Park isnâ€™t a gateway game. There are too many moving parts for it to fit that category. Still, the height requirement isnâ€™t too high, as itâ€™s accessible for casual gamers and families. Itâ€™s an accomplished design that is thematically unique, whimsically attractive and exciting to play. While light and breezy, it also offers interesting decisions and meaningful ways to roll with the luck so that no one should be screaming, â€œStop the ride!â€ With all of its ups and downs, I recommend this one without any queasiness at all.