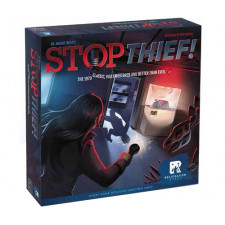 The original Stop Thief board game billed itself as â€œelectronic cops and robbersâ€. It came packaged in a box that looks like the vanguard of 80â€™s new-wave aesthetic and featured an ELECTRONIC CRIME SCANNER that is exactly the thing that would have had me begging my parents for a copy had I been alive at the time. While a well-loved game at the time, it hasnâ€™t exactly stood the test of time. Well, they say that time is a flat circle so here we are almost 40 years later with an updated version. It drops the CRIME SCANNER in exchange for a spiffy app and an exclamation point.

Stop Thief! is one of Restoration Games first 3 titles and is the one that planted them firmly in the modern collective consciousness. The Kickstarter campaign for Stop Thief! raised over $100,000 on Kickstarter on a promise to fully restore and update the classic title for modern audiences. Unfortunately, itâ€™s my least favorite of these three initial launch titles. Where Downforce its 5 Star Review, Stop Thief! fails to grab me by the collar and bring me back to the table.

Players take on the role of Private Investigators, walking the mean streets of the city hoping to nab criminals shortly after they break into one of the boards 4 stores. These bandits are controlled by a slick app that is both the bad guy and bright spot of promise for this updated title. The game is played over a series of turns: the app feeds the players information in the form of audio and visual clues and the players race to catch the bad guy - and get the reward money - before anyone else does. 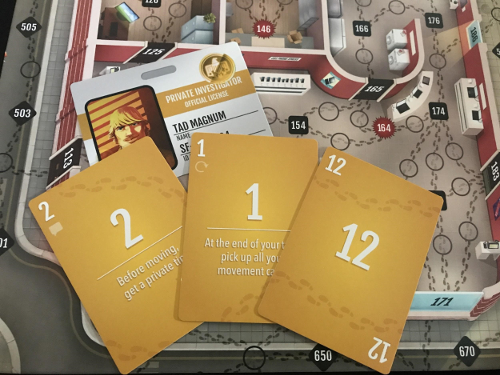 While not as cool looking as the ELECTRONIC CRIME SCANNER, the app functions extremely well. You can effortlessly move between difficulty levels including one that uses the classic behavior of the original game. Both cooperative modes and a 1-vs-many mode where a player will take control of the bad guy are on the way, and the ability to serve up scenarios and new play modes really excites me for the future of the system. Itâ€™s the current implementation that falls flat.

In place of the original roll-and-move system, each cop has a unique hand of cards that help add a dash of asymmetry and flavor to each persona. These cards vary in how many steps you can take while providing light powers and abilities like â€œprivate tipsâ€. Most of the player decisions come from managing this hand; once played a card is lost until the cop takes a breather and plays a low-value card. 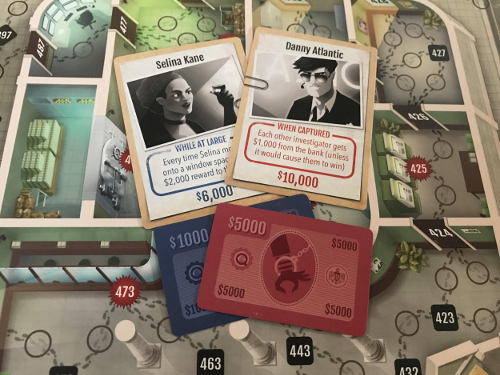 Meanwhile, the app is acting as the criminal mastermind. A web of numbered spaces lay out possible paths on the board while the app spits sounds of creaking doors or shattering glass. Deducing where the thief is going depends on your ability to track her through an ever narrowing branch of possible movement. When itâ€™s time to make an arrest you punch the spaceâ€™s number into the app and find out if youâ€™re right or wrong. This all works admirably and improves on the randomness of the original in any way. It just isnâ€™t super exciting.

With the exception of private tips, information is largely public and isnâ€™t too difficult on standard difficulties to track the whereabouts of the bandit. Making an arrest typically comes down to a choice between two spaces and an incorrect one will tell the whole table where to head next. Once a criminal is captured, another larceny occurs and the cycle repeats until someone collects enough reward money to end the game. Whether the new criminal appears on the other side of the board or right next door doesnâ€™t change the subsequent cycle from feeling rather one-note. 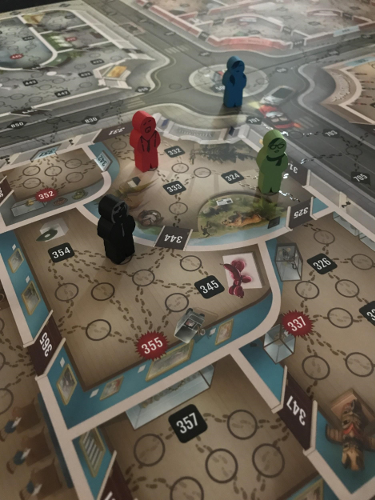 Tension comes from the general tension of wanting to win, not from the game feeding it to you through escalating stakes. There isnâ€™t anything you can do to slow an opponent down, and not enough hidden information to keep a mystery. It is, however, excellent for families or new gamers. There is luck without it feeling arbitrary, and deduction that will never make you feel stupid. As a light-hearted game to play casually or a nostalgic romp for those with fond memories of the original it succeeds admirably. As a knife-edge game of hidden movement and tension it doesnâ€™t quite cut it.

As game players and reviewers we spill a lot of digital ink trying to describe what makes a game special. A game has to be more than a collection of rules and systems, it needs a spark. Without that spark, it might be an enjoyable activity but it isnâ€™t going to jump off the shelf or create the experiences that we remember and talk about. Stop Thief! is an excellent update and a system that has the potential to provide these experiences, but in its current form itâ€™s missing that spark. Iâ€™m not deleting that app though, I have a feeling future modes will begin to elevate this strong system.