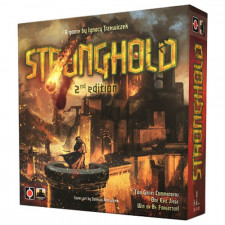 The gaming world knows Ignacy Trzewiczek best for his 2012 masterpiece Robinson Crusoe. Right-thinking folks love that game for its rich, textured narrative and innovative mechanics that support its strong storytelling and its skillful deployment of heavy Eurogame mechanics in the service of creating the gameâ€™s fiction. Three years earlier, the Polish designer had released a sharply asymmetrical siege game called Stronghold and although some of those same qualities so beloved in Crusoe were present, it was a little rough around the edges with confusing, badly written rules and a sense that the whole thing was overly complicated. When I had the first edition of the game, I actually never even got to play it- simply because I didnâ€™t want to go through teaching someone how to play both sides of the battle and then wind up never really getting the most out of it as newer, more streamlined games replaced it.

Here we are in 2016 and Stronghold Games (fittingly) has released a new, second edition of the game that promises smoother, sleeker gameplay and a few enhancements gleaned from years of feedback, FAQs and rethinking of the design. And this time Iâ€™ve played it and enough to call this game the best game I have played this year to date. It is a one of a kind, singular design that paints a vivid and detailed picture of a human castle beset quite literally on all sides by Orc, Troll and Goblin invaders hell-bent on rushing through storms of arrows to scale (or demolish) the walls, trebuchets launching their payloads in the distance as the defenders rally to the walls, manning the cannons and dumping burning oil on the greenskins below. This is epic stuff, and if you are thinking that Stronghold is something of a board game version of the Battle of Helmâ€™s Deep, youâ€™d be pretty close to the mark.

Make no mistake- it is still a highly mechanical, quite complicated system that has not one but two learning curves and the rulebook still kind of sucks. But if you spend enough break-in time with it- preferably with someone who knows the original game well as I did- you will find that this game is all fire and blood and crumbling battlements. The humans only need to survive seven turns to win the game, but every turn is fraught with do-or-die tension. The stakes are high and the drama is sustained for every minute you and a friend are locked in this apocalyptic struggle.

Fundamentally, the whole thing runs on a genius bifurcated resource management system. The invader has a set of cards that essentially provide their turn phases. A couple of core actions are set, but the rest are modular and can be changed throughout the game to adjust the strategic approach. The invader player goes through the process- which starts with a random draw of 14 cubes representing the Orcs, Trolls and Goblins and may include building siege engines, conducting magic rituals or supplying troops with equipment. In order to do things, the invader player has to assign cubes with each type (indicated by color) worth a different value. So if something needs 4 to build, you could put four Goblins, two Orcs, or a Troll and a Goblin on the job. But there is a catch- and not just that spending these cubes also reduces the number of soldiers you can field. For every cube the invader spends, they give a time marker to the defender. If you spend four Goblins, they take longer to do the job than if you assign two orcs.

The defenderâ€™s resource model is based on these time markers. In order to use any of the castleâ€™s buildings to construct defenses, train or move soldiers, send out saboteurs to disable siege engines, set traps and so forth the defender spends these time markers. When it comes time for the invader to move, they also have a choice between major and minor maneuvers, again imparting a sense of strategic flexibility and offering the same trade-off of doing more in exchange for giving the defender more.

So what happens is that the invader has a choice as to how much time they want to give the defender to prepare. Rush in and catch them less prepared, or take the time to launch a stronger offensive against a stronger defense? The choice is yours. Itâ€™s a fascinating balancing method that controls the tempo of the game while building a strong rising and falling narrative.

This is a war game, so the rules of battle are of course a paramount concern. And since it is a siege, there are certain particulars about the process that are necessary to create a tapestry of mixed arms, special equipment and specific tactics. The invader catapults, ballista and trebuchet have a brilliant firing mechanic wherein they get a deck of hit and miss cards that are drawn when they shoot, but the misses are thrown out. The next time they shoot- as their crews work out their angle- they are less likely to miss and eventually theyâ€™ll hit more often than not. These deadly weapons can completely destroy wall sections, exposing vulnerable defenders.

But on the battlements, the defenders can station archers to screen the ramparts, eliminating sappers before they make it to the walls. Cannons and bay windows can be built, as can spaces for additional troops. Heroes might add their strength to a section, or stronger veterans might join alongside infantry to reinforce weakened areas. And it all comes down to melee.

At each wall section where the invader has managed to reach with their soldiers, a battle occurs. Strength on both sides is compared, the loser losing the difference in units or walls. If the difference afterwards is still greater in favor of the invader, itâ€™s game over. Like I wrote above, stakes are high. This can result in a certain level of math-y analysis on the part of the defender, but it remains tense because in that position you have to get it right.

Iâ€™m totally not doing this game justice by leaving out so many details, but thereâ€™s just too many of them for the scope of a review. Thereâ€™s always, at every point in the game, an all-or-nothing choice to be made or a cool narrative element where the mechanics fade into the background and you feel that you are taking part in a vivid story. And donâ€™t worry about the replay- there is so much modularity and setup variety built-in that itâ€™ll be a long time before you exhaust the possibilities here of playing both sides of the battle.

But it is, and I want to be clear about this, not a game to play once or twice on your way to forming a softball opinion on and then moving on to next weekâ€™s new release. This is a game that demands that its players try again. Coordinating the attack or defense becomes more satisfying and sophisticated with familiarity. The rewards for sticking with this game- even through inevitable rules questions, procedural uncertainties and game-costing strategic or tactical blunders are great. Itâ€™s one of those games that I think is ideal for players that have a regular partner willing and able to really dig in and commit to getting the most out of what it has to offer.