Suburbia is one of my favorite games of all times. Few games have captured me like that tile-builder has. I get lost in building my little suburb and watching the tiles come out and would still play it any day of the week. As the expansions were released I bought them immediately and without reservation. Suburbia Inc. adds more of everything and some clever new borders. Suburbia 5* adds an entire new star mechanic, taking some steps to fix the issues I have with the game at a higher play count. Overall theyâ€™re both good expansions, though only one is a â€œmust buyâ€.

Suburbia Inc. was the first expansion released and it brought with it a pile of new tokens, goals, and the entirely new border mechanic. If the base game has a flaw (it doesnâ€™t) itâ€™s that the tile distribution can lead to a few common strategies. Most players are going to buy Waterfront Realty every time it appears. Airports are pretty strong and the Office Supply Tiles are going to provide a reliable source of income. Suburbia Inc. throws a rather heavy wrench in those assumptions. 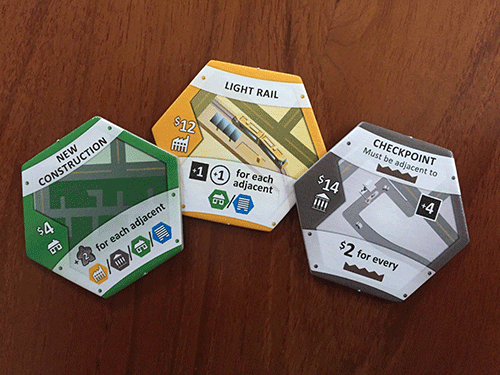 As written, the tiles from Inc. are just mixed in with the base tiles and used to build your normal real estate market. This can mean that previously powerful strategies, like Airports, become riskier. Purchasing early airports can leave you sadder than Tom Hanks in Terminal when you donâ€™t see the late game ones you were expecting. Certain goals become a riskier proposition. To counter this, Suburbia Inc also introduces challenges. These are public mini-goals that anyone can achieve that are checked when you run through the A and B stacks and force you to sacrifice long term goals for short term ones. If that wasnâ€™t enough, Inc. also introduces Borders.

Borders are my favorite part of this expansion. In a game of vanilla Suburbia, your suburb slowly sprawls in any direction limited only by the synergies created or destroyed by adjacent hexes. Borders throw up a 30 foot wall on one side of your board and make you pay for it. These borders represent large constructions or natural features. Theyâ€™re straight lines 4 hexes long that you canâ€™t build through, and are pretty expensive. In return, they offer great bonuses. Building a beachfront is going to reward you for placing residences and businesses along. Building a Radioactive Waste Site will give you a massive infusion of money but any tile you build adjacent â€“ any tile- is going to subtract a significant amount from your score. NIMBY is a powerful thing.

If Suburbia is a serene game of long term strategy, Suburbia Inc. is an injection of the kind of tactical chaos driven by Tech Startups and millennials flocking to the neighborhood. Old strategies must be reconsidered. New strategies emerge. Itâ€™s a must buy and I donâ€™t even bother to separate the expansion tiles from the base ones in my box. Suburbia 5* on the other hand, requires more consideration.

The big draw of 5* is the inclusion of the new Reputation mechanic. Certain tiles now have yellow stars printed on them and Bezier Games has included starred versions of all tiles and borders. The total amount of stars in your suburb is tracked and players with more stars will find themselves going earlier in the turn, gaining extra population, and eventually gaining boosts to income and reputation. Players behind in the star count will not gain these benefits and may also lose population. Unfortunately, this is where 5* loses me as a fan.

The ability to manipulate turn order is a great one and if itâ€™s all the stars were good for Iâ€™d love this expansion. I donâ€™t particularly enjoy Suburbia at higher player counts, primarily because of the fixed turn order. 5* allows you to play with up to 5 now, and modifying turn order makes that enjoyable. Unfortunately, this expansion adds a bit too much. Because of the importance of stars, you now have to ensure a 50/50 distribution of starred tiles and non-starred tiles. This further reduces the synergies from the other two titles and makes stars the driving force of any game played with them. 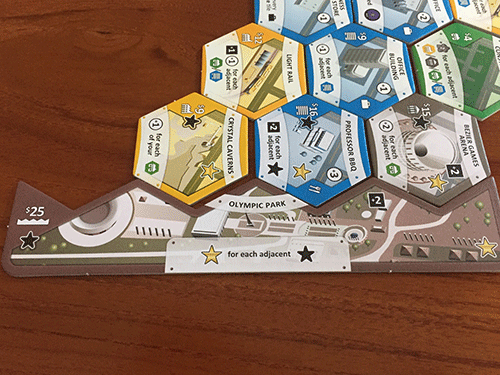 Listen, at least it doesnâ€™t have the old Sim City sewer system.

It isnâ€™t bad per se, it just doesnâ€™t excite me in the way Suburbia Inc. does. 5* is a great expansion for people who enjoy Suburbia with a high player count, or for those who really enjoy digging into the branching options and playing a more difficult game. The synergies arenâ€™t as strong both because the tile pool is further diluted and because it may be more important to grab a starred tile with benefits to your suburb just for the stars. Unfortunately, that isnâ€™t what makes playing Suburbia such a dream.

Suburbia remains one of my favorite games and both expansions have found their way onto my shelf. In their own way they add more municipal goodness to an already fantastic game and at least one of them is a must buy for any fans of the original.