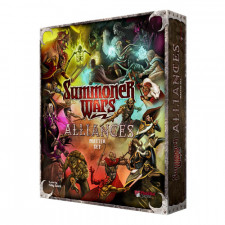 In both cardboard and digital forms, Summoner Wars has been out long enough that it's tempting to sum up the new Alliances Master Set by invoking that old chestnut by Abraham Lincoln or Albert Einstein or some other endlessly misquoted internet source: "The people who like this sort of thing will find this to be the sort of thing that they like." On the one hand, it feels like a love note to the game's longtime fans, right down to the silly map of Itharia printed onto the mousepad-fabric board rolled into the box. On the other, somehow, this sprawling chest of toys for Plaid Hat's flagship card game defies such flippant classification.

This is the same old Summoner Wars, set in a world embroidered with superfluous lore as an excuse for tightly-stitched two-player duels, an unending battle between blustering tyrants like the tough Guild Dwarves and chittering Cave Goblins versus the do-gooder (or at least less jerky) Vanguards and goat-faced Mountain Vargath. The gameplay is as simple as ever, each turn opening with a chance to summon units and cast spells, then allowing up to three moves and three attacks. Its cleverest idea â€” that your units pull double-duty as a magic resource for summoning other troops and casting spells when they die or are willfully discardedâ€” is entirely unaltered. The cavalcade of expansions over the last few years has refined the formula without ever truly altering the recipe, and in many ways Alliances feels like the culmination of that refinement. It's telling, for instance, that a couple of the included factions mention gameplay concepts that were highlighted in previous decks without necessarily making full use of them, like how the Tundra Guild's units reference Ice Walls even though there isn't a single actual Ice Wall in their deck.

This oddity owes largely to Alliances' central twist. Where the game once encompassed sixteen factions, they've now apparently buried the hatchet, summoning stone and magic blast. In the midst of constant war, they've found at least two or three spare minutes for diplomacy, pairing into eight new amalgamated factions. For many of these new decks, this rounds out weaker teams by matching them up with powerful rivals. Previous "Big Three" faction the Phoenix Elves, for example, has now merged with the dice- and draw-dependent underdogs of the Fallen Kingdom to create something new; in this case, the Fallen Phoenix, a powerful contender that packs both control over their dice and the regular reappearance of their deceased units. For veterans able to draw on their tens of previous Summoner Wars expansions, these eight new factions offer an unprecedented quantity of options for deck construction, each effectively drawing from two of the game's previous teams. It's an exciting time to be a fan, though newcomers might feel late to the party.

It definitely feels like a product more intended to please the hardcore than to draw in new players. This is an enormous collection, exactly the sort of thing that makes fans hop up and down while everyone else wonders if its weight will implode their games closet. Its eight complete factions barely fill a corner of its warehouse-sized box, with extra space and handy dividers for every faction and expansion that's come before â€” and even a few that have yet to be released. I'm joking a bit about its size, which only slightly out-bulks your average game box, but for a card game it's a gargantuan, weighty thing.

What's more, the new factions are more complicated than anything Summoner Wars has offered before. Where the older factions usually boasted units with simple abilities, many of the new units are less straightforward. Consider the original Jungle Elves versus their allied counterparts, the Jungle Shadows. The original faction fielded champions who could fire twice, increase their attack power if they stood still for a turn, or trample over weaker units to deal damage. Meanwhile, the alliance version comes with abilities that are a bit trickier to parse. One of them, for example, also moves through other units to deal damage â€” except she can move farther than the original trampling champion and suffers the downside that for each unit she moves over she must roll a three or higher to deal that point of damage. These denser abilities make for a more defined and dynamic set of units, but they're definitely harder to get a handle on.

Personally, where my previous favorite factions were those with the slipperiest movement, the thieving Cloaks, chant-boosting Jungle Elves, and unit-mutating Filth, I couldn't be happier with their beefed-up incarnations, which include the hardier Sand Cloaks, the flitting units of the Jungle Shadows, and the replete fodder of the Cave Filth. In general, these intertwined factions are better-rounded, bring lots of options to the table, and expand the metagame by leaps and bounds. Their newer abilities might require a bit more reading, but even at its most difficult Summoner Wars remains fairly simple from start to finish.

How you get on with Alliances is going to depend a lot on whether this sounds any good to you. If you didn't like this game's previous factions, or hated the luck-based combat, or didn't get along with the slight advantage of defensive play, then this isn't the set that will change your stance on the matter. On the other hand, for longtime fans, this is easily the best Plaid Hat has offered up yet, a box brimming with colorful warriors, powerful champions, and a whole lot of tense head-to-head gameplay.