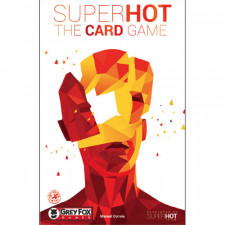 Critical Hits: Reinvents deck-building; hidden depth
Critical Misses: Might break your brain; some goals are harder than others

In the world of Superhot, everyone (but you) is armed, everybody wants a piece of you...and time moves only when you do. Itâ€™s this last tidbit that broke the brains of so many gamers and made the indie PC shooter such an instant classic. The Superhot Card Game, though it swaps out the first-person-shooter and time-bending elements for deck-building and hand-management, does a fantastic job of capturing the feel of Superhot, breaking the deck-building genre as much as the original did for the FPS.

The first thing you need to know about Superhot: the Card Game is that itâ€™s primarily a solitaire game. There are variants in the box for two-player cooperative, competitive, and three-player team-based modes, but these are clearly variantsâ€”this is solo first and foremost. 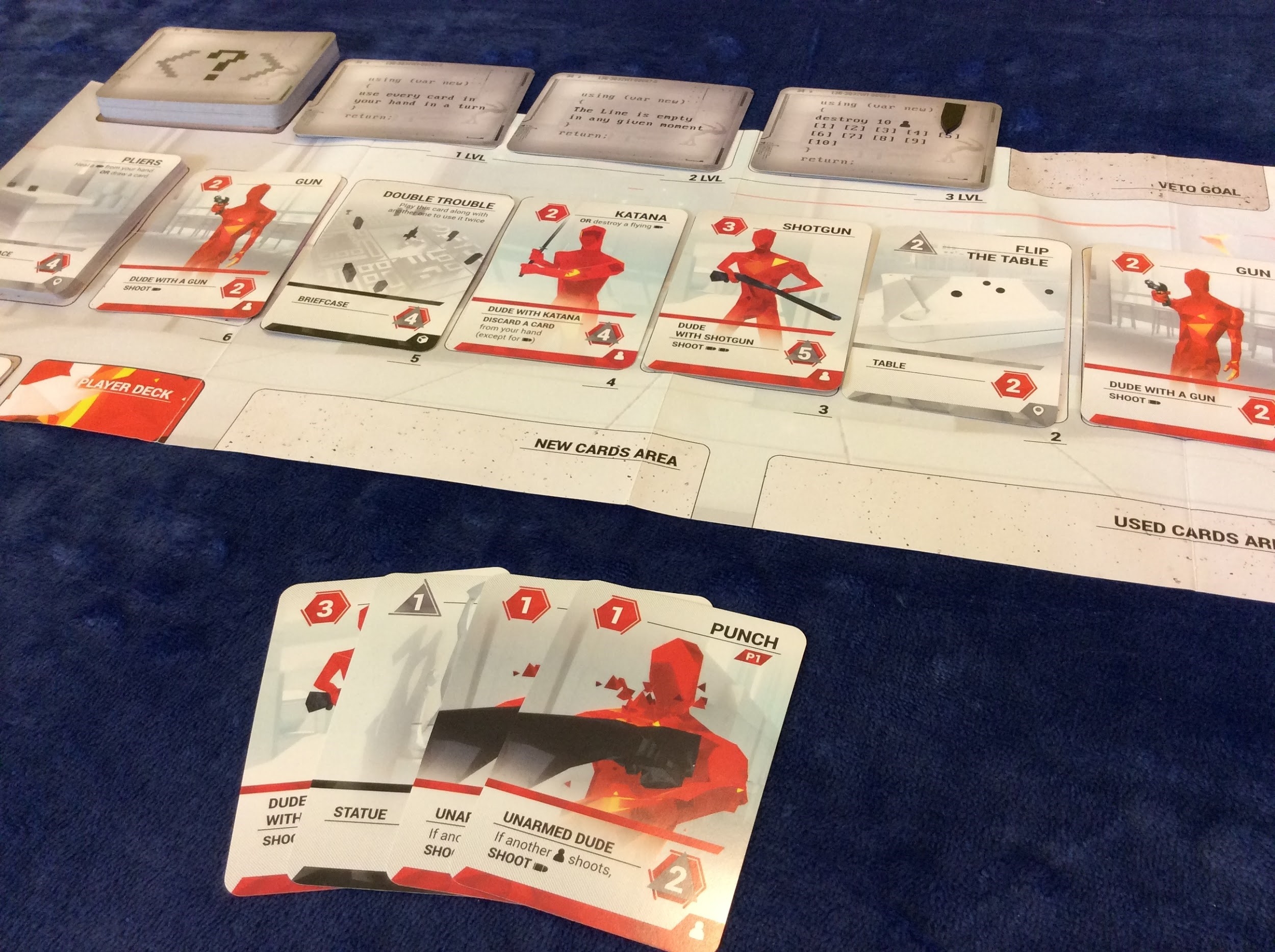 Punch, shoot, or flip the table; whatever is needed to get past those dudes.

The second thing you should know is that the rules of deck-building games as you know them no longer apply. Just as players of the PC game had to shift their expectations and abandon the twitch-based tactics they were used to, so will veteran deck-builders need to get used to Superhotâ€™s one-of-a-kind mechanics.

First of all, youâ€™re not really building one deck so much as managing two. All cards, including those in your starting deck, can function as either obstacle or player cards depending on where you find them. A dude with a shotgun might be a dude with a shotgun while he is in â€œThe Line,â€ a scrolling row of obstacles you need to contend with, but destroying him or simply scrolling past him will add the card to your deck as a shotgun.

But unlike every other deck-builder ever, changes to your deck are never permanent: the moment you play that shotgun, it goes back into the obstacle discard pile, so another shotgun-toting red dude can respawn later in the level.

Nor do you really want your deck to grow and grow; if either the obstacle or player deck gets too thin, youâ€™ll lose. Instead, you want to keep both decks at a manageable size and variety while you aim to fulfill the levelâ€™s goals.

Another brain-breaking departure from the typical formula is that you can â€œbuyâ€ cards from the Line without actually â€œbuyingâ€ them. There are two resources in Superhot, Fight and Dodge. Hitting an obstacleâ€™s target value in the correct resource can destroy it, which means it goes straight into your hand next round. But every card you play also scrolls the Line forward, and cards discarded from the front of the Line end up in your discard pile. You canâ€™t play cards with no effect, though, so surviving each turn is a mini-puzzle of actually defeating far-away obstacles and merely scrolling past nearby ones.

Instead of destroying an obstacle, you could always Knock it Out. At first, itâ€™s hard to see why youâ€™d ever take this option: it costs the same, and Knocked Out obstacles get discarded into the obstacle discard instead of your own. Once youâ€™ve learned the rhythm of the game, however, youâ€™ll realize how invaluable this move is. Just to name a few applications, it slows down the Line, which is important when youâ€™re trying to achieve some specific configuration for your goal, and it prevents your less useful starting cards from returning to your deck. 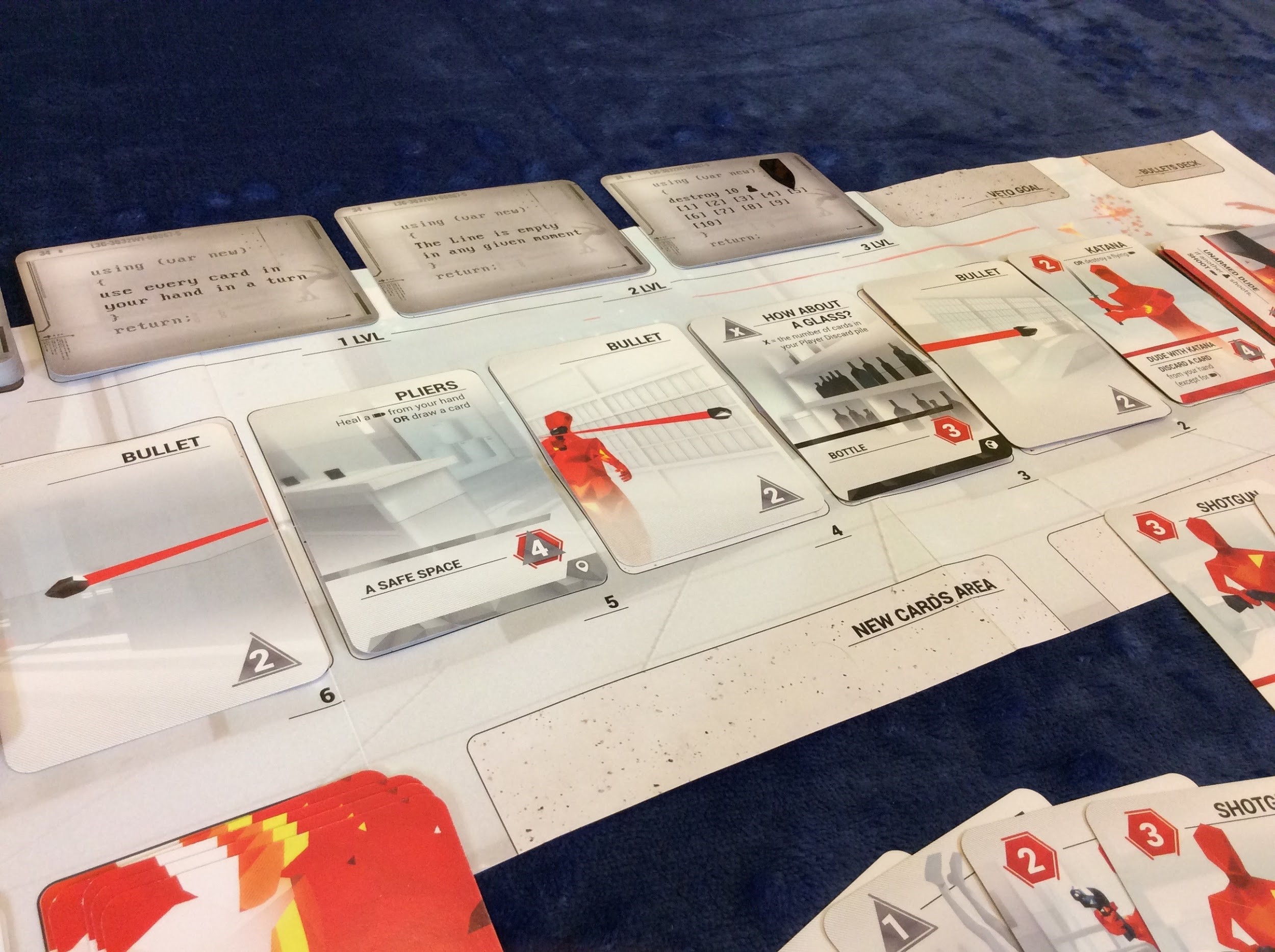 Defeating enemies is just a step along the path to completing goals... but watch out for bullets!

As Iâ€™ve alluded to several times, Superhot is all about fulfilling goals. The game takes place over three â€œlevelsâ€ composed of one, two, or three goals each. These goals cover a broad range, from knocking out X of a specific type of card to having three flying bullets in the Line at once.

Surviving in Superhot isnâ€™t too hard - but surviving while completing your goals is, especially if those goals involve bullets. Most enemies still in the Line after scrolling will fire bullets, which go into the obstacle discard pile. When they pop up in the Line later on, theyâ€™re flying bullets and must be avoided with Dodge (or sliced through with a katana) before they scroll off the end of the Line and go straight into your hand. Bullets in your hand are bad news indeed, because they count against your hand limit and canâ€™t be played or discarded except with special cards. This decreased hand size makes it harder to deal with threats, which tends to result in more bullets being fired, and pretty soon youâ€™ve lost from either too many wounds or too many bullets whizzing through the air.

It took me a few plays to really wrap my brain around Superhot. The experience is just so far removed from any other deck-builder, or any other game period, that elements of the design that seem like major flaws on the first play reveal their brilliance on the third. Itâ€™s a deck-builder that moves at its own pace.