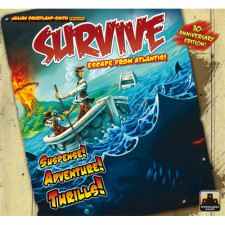 Youâ€™ll find out what kind of people youâ€™re sharing a table with very quickly in a game of Survive!. Youâ€™ll even find out what kind of person you are, and it might be horrifying. The design is sound, especially for a game that originally came out in 1981, and thereâ€™s a lot to admire about it objectively speaking. But what really takes the game to a whole other level of greatness is the way that it draws out each playerâ€™s personality in such a tangible way.

The gameâ€™s structure is pretty interesting and fairly unique for its time. Thereâ€™s an island thatâ€™s sinking, on which youâ€™ll place your meeples of various point values. Youâ€™ll then take turns moving your meeples, sinking a portion of the island, and activating the various predators that surround the waters of this paradise gone awry. At the word â€œgo,â€ each player will start figuring out how best to utilize the tools the game gives them to gain victory.

Some players will focus on the most efficient way to get their meeples to safety. Theyâ€™ll group their high-value VIP followers near one boat right on the edge of the water and make a mad dash for higher ground. For this kind of player, thereâ€™s a lot to love in Survive!. In a time when most games had players roll dice for movement or activation points, the game introduced the concept of a fixed number of action points. Itâ€™s a fun, light puzzle, trying to figure out where your points are best spent and where itâ€™s a lost cause and a waste of resources.

Other players are team players. Theyâ€™ll shove one meeple onto each of the other playersâ€™ boats and beg everyone to make the journey as bloodless as possible. Theyâ€™ll point out good ways to get the deadly sea creatures to areas where they canâ€™t do any harm, and theyâ€™ll even spend action points helping others, as long as it helps them a little bit too. Itâ€™s hard to believe a game that looks as cutthroat as Survive! does at first blush can feel even remotely cooperative, but itâ€™s true.

Thereâ€™s even room at the table for negotiators, players who love making a sweet deal. Whether youâ€™re the type that likes to make big promises only to back out and save your own skin, or you prefer a good, honorable agreement, the gameâ€™s playspace is big enough to support your preferred brand of off-the-board interaction. Youâ€™re not exchanging tangible resources as in Catan, but simple agreements to help one another in order to secure the safety of your precious followers.

So if your table is filled with efficiency engine manipulators, negotiators, and cooperative spirits, itâ€™s going to be a solid time. Thereâ€™s enough here for these players to enjoy. But what really makes Survive! sing is the player whoâ€™s out for blood, the guy with an axe to grind. This guy doesnâ€™t use his creature phase to get sea monsters out of the way or move a shark out of reach of one of his followers--he uses it to capsize boats and snack on helpless swimmers. Heâ€™ll even summon a sea monster to obliterate a boat with one of his own followers, as long as it hurts the other guy even more. The interesting thing about this last kind of player is heâ€™s infectious. Itâ€™s a disease. When one player wrecks your escape boat full of VIPs, thereâ€™s just no way you can let it go. Youâ€™ll turn on him the first chance you get. Then, the seas that surround the doomed isle begin to turn red with the blood of meeples, and then, youâ€™re really playing Survive! as it was meant to be played.

Thereâ€™s but one mechanical failure in this game, and itâ€™s that the tension tends to decrease near the endgame, especially with aggressive players. Since most meeples are dead or rescued, the last few rounds tend to consist of gamers just going through the motions. Youâ€™ll even often run into the situation wherein one or two of the players wonâ€™t have any meeples left to move, but theyâ€™re forced to hang around to activate sea monsters and sink one of the few remaining tiles to push the game to its conclusion. Itâ€™s not a dealbreaker, but I do wish there were more to do when most of your meeples have escaped or drowned.

There may not be a â€œrightâ€ way to play Survive!, but there sure is a fun way. Sure, itâ€™ll take some negotiation, some strategic planning, and even some cooperation to win the day. Still, the very best part of this game is that evil smile you flash as you slowly reach over and slide the sea monster onto a boat that no one thought you would attack, since your own follower is hitching a ride on it. Itâ€™s sinking a tile with your enemy on it and laughing as heâ€™s lost to a mighty whirlpool. But most of all, itâ€™s when it gets to your opponentâ€™s turn, and he flashes you the same smile, because thereâ€™s no way heâ€™s going to forgive and forget. When Survive! turns into a bitter bloodbath, itâ€™s one of the purest joys in gaming.