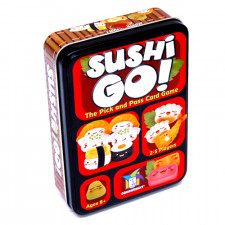 The filler is a time-honored staple of gaming groups all over the world. While everyone is waiting for the chronically late guy or gal to show up, the rest of the gang busts out the small, quick, light, quirky, cheap games that they otherwise wouldnâ€™t be caught dead playing. â€œGuys, I know itâ€™s about courting a princess, but itâ€™s really fun; I swear!â€ Sushi Go is the quintessential filler game to be sure: 20 minutes would be considered a long session, and the huggable sushi art is a welcome departure from the bloody Orcs and sci-fi babes plastering most feature-length game boxes. Thankfully, designer Phil Walker-Harding remembered to include an exciting, tight game design in there too.

A Sushi Go play consists of three rounds of drafting delectable raw fish for your consumption (mercury content sold separately). As with most drafting games, players can go for instant points or delayed gratification, betting it all that they can collect a big set to cash out later. Those who have played the game a few times will have an advantage in that theyâ€™ll be more familiar with the card distribution and the likelihood that certain cards will show up in a given round. Itâ€™s easy to pick up and quick to play, with clear scoring reminders on all the different types of cards you can draft.

The game rewards players with points for some smart planning and risk taking, but itâ€™s not afraid to liberally sprinkle some luck in there so everyone can have a good time. When the game flows right, itâ€™s a nice diversion for all involved, whether youâ€™re focused on collecting a big set of sashimi for a major point payoff or going for some quick nigiri points to round off your platter of goodies. Itâ€™s really a delight to play, though as in all drafting games, slow drafters can confuse the flow of the game if someone's not keeping an eye on them. Keep your sand timer at the ready to kick those players into gear!

The gameâ€™s pleasant, whimsical groove can also get stuck in the mud during scorekeeping, or when you realize someone has accidentally skipped a draft or drafted one too many cards. For a game that is built around its quick, fast, rewarding play, it sure is tough to get back into the swing of a game when something goes awry. Yes, this is mostly a player problem, but for a game thatâ€™s sure to see rotation as a light, family game, it happens more often than you would think. If youâ€™re teaching the game, be sure to communicate clearly with all players to make sure no oneâ€™s getting ahead or behind.

Another issue is that the end of each round tends to be something of a letdown. While each new hand feels like a fresh opportunity to score some delicious victory points, by the final card or two youâ€™re at the mercy of the cards. This can become a problem in most drafting games; the trouble here is that there are several cards that are far more valuable in the first few drafts than at the final pull. Players are having fun collecting sets, and then get stuck pulling nothing but worthless chopsticks, wasabi, or a measly dumpling at the end of the round. The gameâ€™s strong suit is in giving players positive point feedback, and the design hurts itself here a little bit.

But really these are nitpicks, because it just feels great to pull off a Maki Roll coup or to edge out another player for the big Pudding point swing at the end of the game. Sushi Goâ€™s designer was also bold enough to allow for large point spreads at the end of the game, eschewing the current design trends toward almost indistinguishable scores. Itâ€™s not unheard of to see first place all the way out to nearly double the last player, usually because he drafted better or just got a little luckier. The gameâ€™s endgame scores are reasonably reflective of the playersâ€™ performance in the game, which is becoming something of a rarity these days.

In short, Sushi Go is a fun, light filler that, like store-bought sushi, can be a little bland on rare occasion. It may not end up having the staying power of something like 7 Wonders or a hardcore MTG booster draft, but I think it edges out its peers like Fairy Tale for the role of â€œfiller drafting gameâ€ quite nicely. Set your expectations right, and youâ€™re in for a tight little drafting game that should remain a staple in your filler bag. Now, practice your sales pitch with me: â€œGuys, I know it has cutesy anthropomorphic sushi on the cover, but I swear, itâ€™s goodâ€¦â€