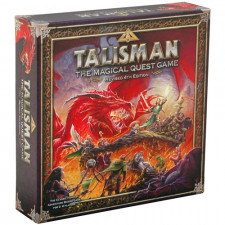 Critical Hits: Common design elements to create an approachable and intuitive design, One of the most influential designs ever 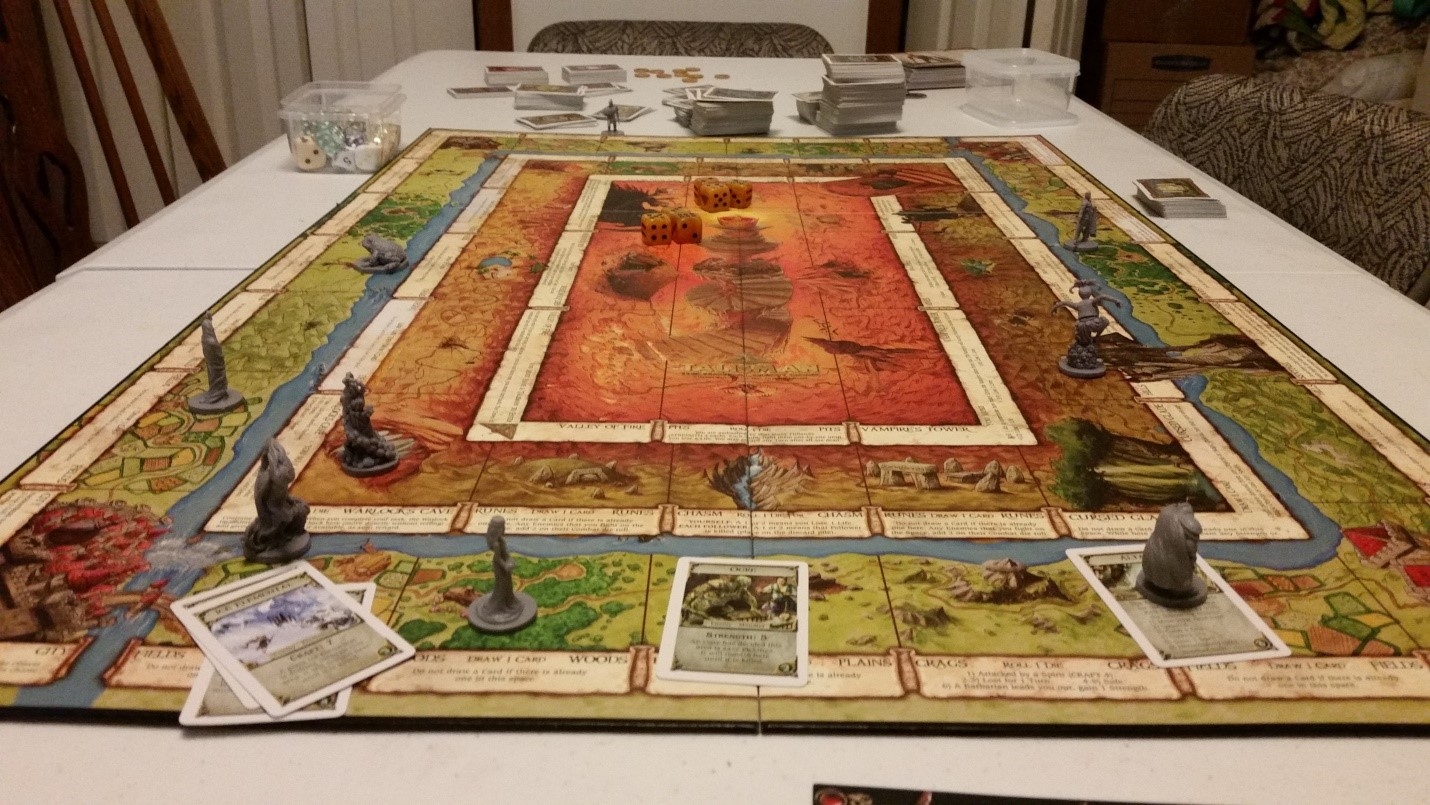 This game is not for the unadventurous.

If most board games are novels, then Talisman is folklore. It technically has a designer, but rather than some authored experience, it feels much more like an ancient manuscript, a blast from a long-forgotten past. It uses the most basic gaming vocabulary to weave the ultimate adventure game, an experience filled with victory and defeat, frustration and joy. Modern gamers will find some of its design choices baffling, but it remains one of the most influential designs in the history of the hobby, while simultaneously leaving behind all of the games whose design it informed.

Originally designed by Robert Harris and released in 1983, Talisman is a game that barely needs to be explained. Every player is an adventurer who seeks the Crown of Command so they can use it to vanquish the other players. The Crown is at the middle of a big board, and the players must gain prowess in both strength and magic, so that they can make the brutal journey. Players simply roll a die, and move left or right. Wherever they land they will have an encounter, which usually means drawing from a deck of cards and finding a monster to fight or an item to take. Defeating monsters allows players to increase their stats, making it easier to fight their way toward the Crown.

Gamers new to the hobby will find Talisman to be a head-scratcher. It is very clearly a byproduct of another time. There are moments that are unfair, such as when one player encounters a snake and wins their fight easily, while another has to fight a dragon and gets mauled. Everything is done through the rolling of six-sided dice, and as every gamer knows, dice don’t care whose day they ruin. The movement is also intentionally limiting, offering players a simple binary choice as to where they will go. Likewise, the game provides no internal timer, meaning that the game could theoretically go on and on forever until one of the players decides to end it.

These design choices are a reflection of the assumptions of designer Robert Harris. By his own admission, Talisman was an attempt to distill the essence of Dungeons & Dragons into board game form. It reflects the same sort of open antagonism toward the players, making every encounter seem like a genuine existential threat. It is also an oddly amoral game, where good and evil has little meaning beyond some alignment-specific items and spaces on the board. You aren’t there to be noble, you’re there to get treasure.

In this light these design choices make a certain amount of sense. In the absence of a DM to provide a world and obstacles for the player, the game itself is somewhat adversarial. The extensive luck and limited choices force the player to approach the game on its own terms. This gives the sense of a game where the players are at best strangers, and at worst interlopers, in a world over which they can exert little control. This has the upshot of making the game feel, well, adventurous. You know that feeling in an RPG where you wander into the lair of a monster that can definitely kill you? Talisman is one of the rare games that gives that same “oh crap” feeling. 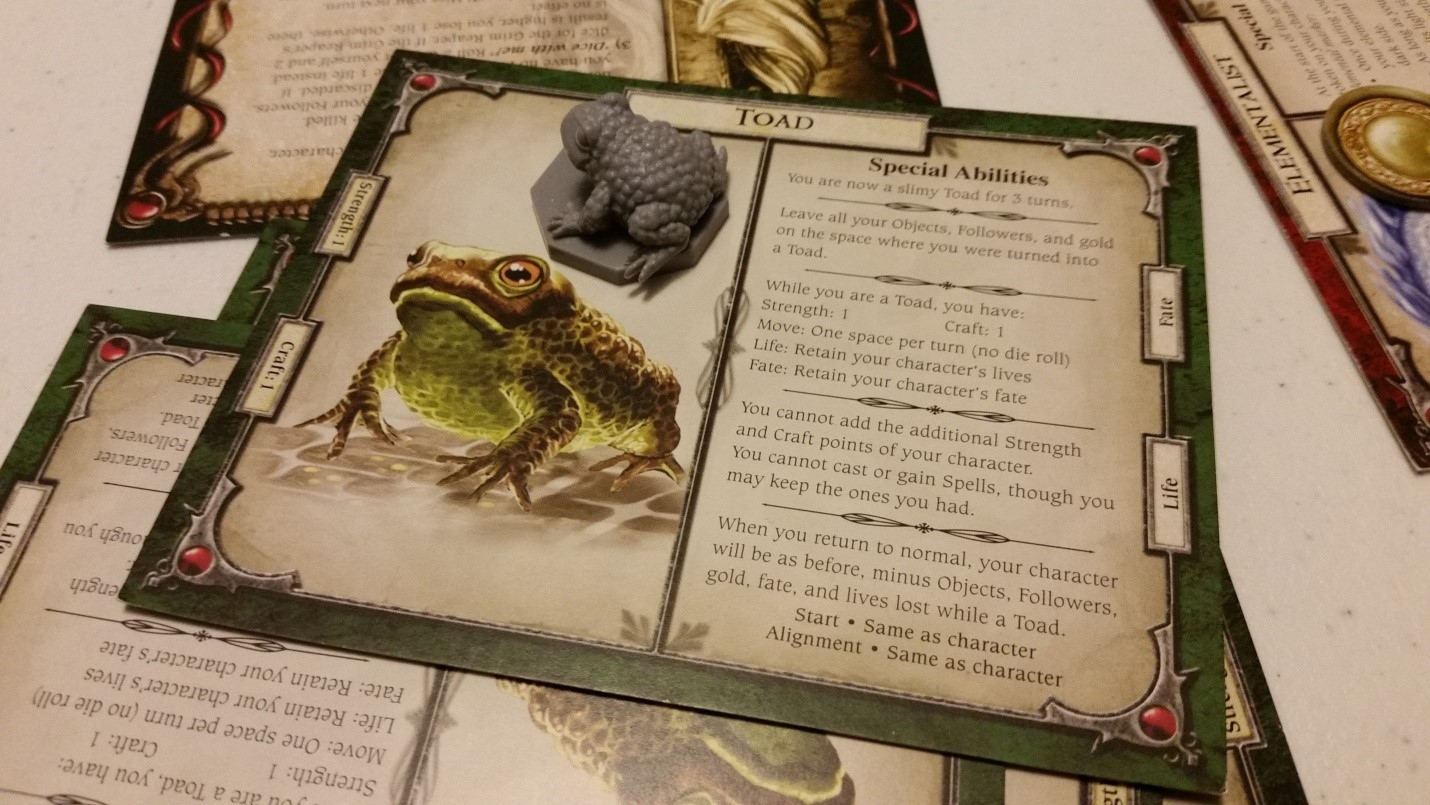 When compared to its descendants like Runebound, Mage Knight, and Eldritch Horror, Talisman is very simple. This is probably where it will lose most hobby gamers, who simply like to have more complexity than Talisman will ever provide. But far from a liability, this is actually one of the game’s hidden strengths. Unlike most of the games it spawned, Talisman can be up and running, including explanation, in 5-10 minutes. Turns are short enough that there is rarely much waiting around for anything. Even with the addition of expansions, the game uses so much familiar gaming vocabulary, like rolling for movement and a rectangular track around the board, that it will be instantly familiar to most people who possess even a passing familiarity with games. This also makes Talisman a terrific game for children, and one of the great joys in this hobby is playing a game of Talisman with my son. This game refuses to make concessions to hobby tastes, and while this might drive away many hobbyists, it has also made it one of the most successful games out there.

Anyway, there’s more strategy than it looks. Almost all of it boils down to assessing risk, whether you should go for the safer choice and reward, or swing for the fence with a greater possibility of success or failure. Timing the move toward the Crown of Command is also a huge part of the game. None of these decisions are enormous in isolation, but when you put them together it makes a big difference. There’s a ceiling over how well you can play, but it’s definitely possible to play poorly.

Talisman has seen multiple editions, and lots of expansions. The current edition (known as the Revised 4th Edition) was originally published by Fantasy Flight Games under a license from Games Workshop, but has been reprinted by GW directly. Fantasy Flight released a whopping fourteen expansions for the game, half of which have already been reprinted by Games Workshop, and all of which are compatible with the FFG version. This is certainly one of the most evocative games out there, with a colorful board and great illustrations. The minis are not up to the usual GW standard, but they get the job done all the same. The expansions are a lot of fun, although adding too many of them can make the game quite long.

I put off trying Talisman for many years, because of all of the horror stories I had heard about ridiculous luckfests and games that took all day. I shouldn’t have worried, because once I tried it, it was love at first sight. I’ve also introduced it to several other players, and it has become a much bigger success than I ever expected. It definitely requires a laid-back attitude about luck and strategy, but players who want to just fight monsters and get treasure will find nothing else that satisfies that urge so well. It allows for one of the best social gaming experiences there is where players can swap stories and sling spells at each other. As deep as I get into this hobby, there’s nothing quite like the delicious schadenfreude of watching your friend get turned into a toad for the third time. Talisman remains the most primal, the most accessible, and the most adventurous adventure game of all.