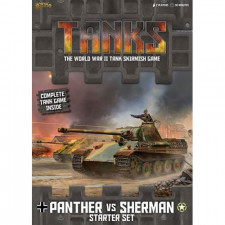 CT: While many of us know Gale Force Nine from their U.S. based board game studio (Firefly, Spartacus, etc.), their origins lay with their New Zealand parent company that is responsible for the ever popular World War II miniatures game Flames of War. Tanks comes from this side of the globe as a new armor-based skirmish game akin to X-Wing and Wings of War. Itâ€™s a light head-to-head duel that is targeted as an intro into the hobby and pulling those who have drifted away back into the fold.

MB: And I think as an introductory product, this game succeeds in spades. I love that it says â€œComplete Tank Game Inside!â€ on the box, I love that it feels like getting a Revell/Monogram/Testors model kit but then you can play a game with it. In some ways this product feels like it is aimed more at kids than the middle-aged grognards that anything WW2 is generally marketed toward. I really appreciate that, and my kids do too- they love the game, and they are six and almost five. They need help with the cards and I had to explain how tanks have less armor on the sides and rear, but by the second game my son was flanking my Panther with the two Shermans. Itâ€™s supremely accessible, even more so than X-Wing, at least in terms of rules.

CT: When I first heard about this game, â€œX-Wing heads to the European Theaterâ€, I was hooked. Iâ€™m a retired WWII buff and a fan of films like Fury. What more could we ask for?

MB: Well, thatâ€™s where it gets a little trickier. Because I think there is a lot more we could ask for, the question is if we actually want it or not. The game is, at this stage, in a â€œjust enoughâ€ state. For a simple tank versus tank battle with a small number of vehicles on each side and a couple of pieces of terrain, itâ€™s right-sized. But it isnâ€™t hard to see where the potential for more variety and depth are in it. During the second game we played, my son said â€œit would be really cool if there were some army trucks or a base to attackâ€. And since this is sort of a stealth expansion of Battlefrontâ€™s Flames of War product line, maybe weâ€™ll get that.

CT: Yeah, I threw you a softball there. Although, I definitely think weâ€™ll see the product line develop and mature as time goes on. The first wave of new forces, including British and Soviet, looks great and we know thereâ€™s more coming since the almighty Tiger isnâ€™t listed.

MB: Thatâ€™s really unfortunate. That is like when the first X-Wing expansion didnâ€™t have the TIE Interceptor. I usually gravitate toward Soviet stuff in a WW2 setting. Iâ€™m on board for more, but I canâ€™t help but wonder how far this â€œarmor onlyâ€ concept can run. 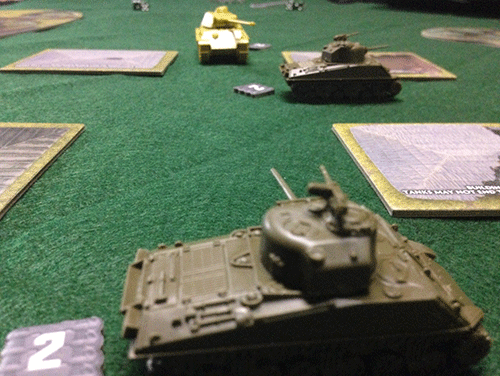 CT: My main concern with Tanks is depth, not unit variety. This is a fantastic little game that plays out like X-Wing on a much more simplified scale. No pre-plotted movement, no action system, just move anywhere within that little range ruler and then fire. We have the X-Wing initiative and upgrade system with interesting crew slots, but beyond that the game is all about positioning and cover.

It succeeds due to this simplicity and itâ€™s very easy to get into, which works in the gameâ€™s favor. I wonder though if this will garner a large audience since thereâ€™s not quite as many gears to tinker with or builds to discuss. I worry the action could get repetitive, although itâ€™s hard to tell with the small forces included in this affordable starter.

MB: Here is where I think I skew a little more positive than you do, and on the fulcrum of this gameâ€™s accessibility to kids and to folks who may not have much experience with wargames or miniatures games. Approaching this as a kidsâ€™ game, all of the concerns about depth, audience, organized play, longevity and so forth melt away. When I play this with my son, none of that matters. Positioning and cover â€“ along with some other minor details like flanking, hit location, and balancing movement versus accuracy â€“ are plenty enough for us.

But I will grant you that I think there are some that will see that little movement arrow and the super loose movement rules and think that there isnâ€™t much here. But if you are familiar with more complex games or you play more complex games, then this is either a fun-first trifle, a guilty pleasure, or anathema to all that hobby gaming stands for.

CT: Totally, it says a lot that Iâ€™m criticizing the gameâ€™s long-term depth while still ready to fork over some cash for the expansions. While the depth may not be there to make this a lifestyle game, the fact that itâ€™s not exactly a lifestyle game makes it so damn appealing. I donâ€™t have the fortitude for another of these â€œall-inâ€ type product lines, but this one is simple and easy enough to pull out and hit the table that itâ€™s going to get played. Thereâ€™s definitely something smart and enjoyable in the simplicity that has me itching to go and have a little throw down right now.

MB: Yes, I am actually glad it is not another X-Wing, Iâ€™m not feeling the â€œthree of everythingâ€ pull. But I think that again speaks to how smartly this game is packaged and marketed. Itâ€™s not really intended to be something for the veterans or for the competitive scene so I wonder if concerns about depth and longevity are even relevant. Itâ€™s perfect for people like me that have kids that Iâ€™d like to get interested in miniatures, modelling and other aspects of the gaming hobby. Or for more casual players who donâ€™tâ€™ want to go â€œall-inâ€. Itâ€™s pitched square at these mindsets, but it also has a few hooks that could lead to more â€“ such as the entire Flames of War product line. That said, if it stays Tanks and thatâ€™s all it is, I have ten of the Tanks models now and itâ€™s plenty enough to throw out the green felt and some Heroscape trees and have a little armor battle with easy rules and easy fun.

CT: For sure, weâ€™re in agreement here. I think the future of this game is wide open and Gale Force Nine will definitely be offering support. Where itâ€™s going and what it looks like in two years is definitely something to muse on. Hopefully when we reconvene on this title down the line weâ€™ll still be tearing up Normandy with zest.