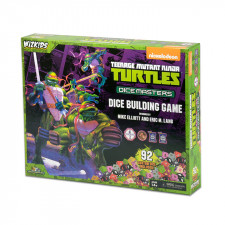 We could all come up with problems we have with the collectible format, but one that has always vexed me is barrier to entry. Itâ€™s not so bad if you have the foresight and resources to get in on a product at the ground floor, but if youâ€™re like me and want to wait to see if a game has legs youâ€™re in for a tough time. While any collectible game can be played in a more casual format, the question of what you should buy and how much is something that chases me off from plenty of CCGs, LCGs, minis games, and countless others. Wizkidsâ€™ Dice Masters line has absolutely exploded in just two short years, branching across several IP and different series. Itâ€™s all very overwhelming, which is why Iâ€™m so glad we have the Teenage Mutant Ninja Turtles Dice Building Game.

The TMNT Dice Building Game works in a couple different directions. Itâ€™s definitely a Dice Masters product, where all of its content is fully compatible with Marvel, DC, D&D, and any other Dice Masters sets out there. That means that itâ€™s a game where you have a team of fighters, all represented by different dice. You can â€œbuyâ€ those dice to add them to your bag, and when eventually roll them they can either create a unit who will fight for you, or produce more energy to buy more dice. Any units that end up on the board can fight your opponent, who will block with his own characters or else take the damage himself. 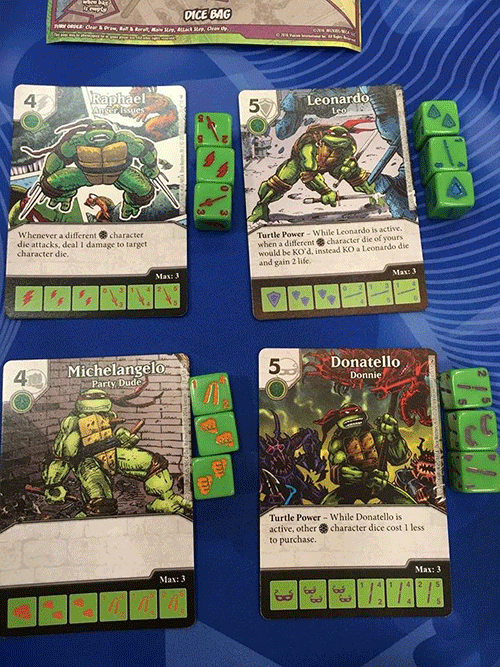 Since this is my first experience with Dice Masters, I was reminded right away of Magic: The Gathering. The combat in particular will feel instantly familiar. However a couple of rules make Dice Masters a little more forgiving. First of all, if your unit is unblocked and deals all of its damage it is essentially discarded and will need to wait in a pile to be rerolled after your dice bag is empty, but if itâ€™s blocked it doesnâ€™t deal its damage and hangs around. If a unit is destroyed it can be rerolled in the next turn. These rules force some really cool decisions. Is it worth blocking now, or do you let the unit deal its damage so it will go out of play? Should you block everything and run the risk that those dice, once defeated, wonâ€™t be back in play as units? Thereâ€™s no doubt that Dice Masters owes a huge debt to M:tG, but it is tactical considerations like these that elevate Dice Masters into something more.

But there is something else special about the TMNT set: it is actually a self-contained product. There are no boosters to buy, and what you get in the box is a full set of the cards and dice that were produced for the Ninja Turtles. As good as the game is, itâ€™s this factor that I think makes it the most appealing. If someone balks at the need to buy gravity feeds and core sets, this product is just about ideal. It provides a generous amount of content for two players, and there arenâ€™t any details that will only pay off if the player invests in more Dice Masters sets. You can basically treat it like any other board game in that sense. But if the player wants to invest further, these cards are fully compatible. Where this set fits into the current metagame of Dice Masters is for a more experienced player than I to ascertain, but I love that this game lets you go in either direction without forcing you one way or the other. The only downside is that the player mats and bags included in the box are pretty crappy. Wizkids is clearly pushing you to buy their official TMNT Dice Masters products.

Of course itâ€™s also a lot of fun to have the Heroes in a Half-Shell sitting there in front of you. Like many elementary-age boys in the late 80s and early 90s, I was a big fan of Teenage Mutant Ninja Turtles. This set is a big treat for people like me, and it has proven to be a big hit with my six-year-old son as well, who is becoming something of a Ninja Turtles fan of his own. The only problem I have is that all of the artwork is based off of the original comics and the 1980s TV series. This is fine for people who like nostalgia, but this is not the Ninja Turtles most kids these days will care about. Given the instant appeal this game had with my son, I really wish Wizkids had utilized artwork from the newer Nickelodeon show, the one made for the younger generation. Itâ€™s not exactly a problem, but it looks to me like itâ€™s trying to appeal less to kids who might become new gamers, and more to their parents.

But the very fact that itâ€™s been such a hit with my son has been extremely gratifying. I can see this being a huge gateway for young gamers, since it has an appealing license and a much lower price point than other Dice Masters products. An expansion with more characters has already been announced, and Iâ€™m looking forward to it. Wizkids already had a winner on their hands, and this game is an ideal way for them to expand it.