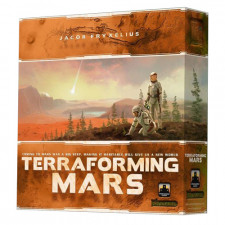 Mars has become a pretty popular topic (and theme) in recent years. Many are vying to be among the first to shoot out into space and colonize the Red Planet. As for me, well, Iâ€™m boring and am not interested in playing real-life Oregon Trail in space. Besides, I rather our technological advancements focus more on inventing a stapler that wonâ€™t jam instead of trying to make Mars inhabitable. But I get how that might be slightly less worthwhile for the progress of humankind. Plus, that would make a far less exciting board game.

Terraforming Mars is one of the most self-explanatory game titles ever. Over the course of several generations (i.e., rounds), you and your opponents will be planting trees, creating oceans, and building cities to make the planet inhabitable. But this isnâ€™t just some recently popularized theme pasted on with Knizia-strength glue. Each card and action makes sense. For example, the card Wave Power requires oceans and increases your energy production while the action of placing a greenery tile raises the oxygen level. Itâ€™s clear how much thought went into the design. What makes it even more impressive is that each of the 208 cards in the game is unique and how well the game plays. 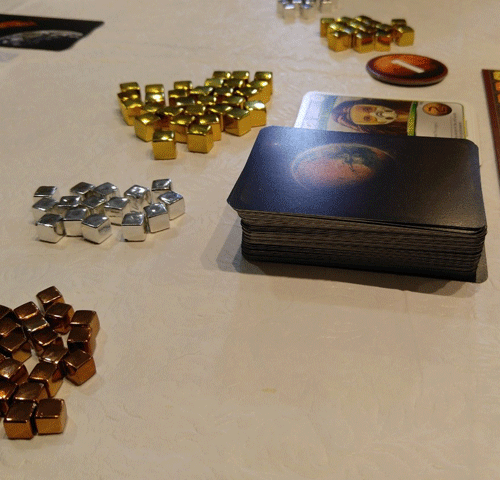 Come for the metallic cubes, stay for the endless deck of cards.

To distill the game down to its mechanisms, itâ€™s an engine building game in which you must efficiently use your limited resources to increase your production racks in order to be able to play cards and get points. The heart of the game is in the cards. Each round, you receive four new cards, but Terraforming Mars doesnâ€™t just hand you anything. You have to work for it. Any of the cards you want to keep, you must pay 3 MegaCredits (Mâ‚¬) for. The kicker is that youâ€™re operating on a small budget and having to sometimes pay half of your income just to keep those cards in your hand. This is one of the most agonizing decisions in any game. You need more cards to get more resources and production, but you also need to keep your money so you can put out the other cards you already have. More times than not, you look at your four new cards and wrestle with which you can afford to keep when theyâ€™re all so good. On top of that, timing is everything; not only for when you can play a card, but also when you should. You know you need to have some endgame points cards, but you canâ€™t afford to keep stockpiling them when youâ€™re not allowed or canâ€™t afford to play them yet. All of this makes the game perfectly tactical and strategic by allowing you to fulfill short-term and long-term goals, based on what cards you keep and play.

One other cool thing about the timing aspect in Terraforming Mars is how you take actions. On your turn, you can either take one or two actions. This may seem strange at first, especially since two is better than one, right? Not always. Sometimes, you want to rush and do two actions to get in before an opponent. Other times, you want to delay, hoping the board-state may change, which will let you play a card you couldnâ€™t previously play or place a tile in a better spot. This is the frosting on the already compelling decision-cake that the game serves you.

Cube pushing at its finest.

I could gush for a long time about all the things Terraforming Mars does so well, but Iâ€™ll wrap it up by talking about one other awesome part of the game: Milestones and Awards. Milestones are function like achievements and Awards are for the best in a category. The reason why these are so exciting is because someone has to pay to active the Milestones and Awards and there can only be three of each in the game. Again, timing is everything. Both Milestones and Awards cost money, which is always tight. And for awards, just because youâ€™re ahead in something now, doesnâ€™t mean it will be the case at the end of the game. You donâ€™t want to fund an award that ends up giving someone else points. At the same time, wait too long and the ones that benefit you might be taken. The tension in these decisions and balance in timing your actions absolutely is what makes the game so exciting.

Although itâ€™s obvious how much I enjoy Terraforming Mars, there are a few caveats to consider. First, itâ€™s a longer game that will take you a solid two hours or more, especially at first. This doesnâ€™t differ too much with player count, but of course, it depends on who youâ€™re playing with. Thereâ€™s also a good chunk of information to take in at first; reading through all the cards can be overwhelming, especially knowing what to do when. However, most people seem to catch on fairly well halfway through their first game. Additionally, the game is a slow burn. There arenâ€™t any big, exciting moments where you shout for joy and jeer at your opponents. This isnâ€™t to say itâ€™s not satisfying. There are many times when you finally get that card youâ€™ve been saving up for down or can pull off a combo that where you can make some gains. 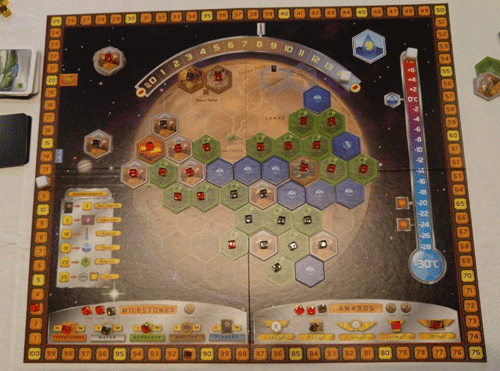 I won, so Iâ€™m basically an expert space scientist at this point.

There has been a lot of hype for Terraforming Mars and although I have some hipster tendencies that make me think something canâ€™t possibly be that good if everyone else is saying it, Terraforming Mars completely proved that to not be the case. Everything in the game feels new and familiar at the same time, which is what makes it so good. Although many of the basic mechanisms are in plenty of other games, I canâ€™t think of a single game that feels anything like Terraforming Mars.