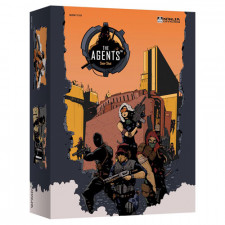 Double agents are a linchpin of the spy narrative; the exploits of James Bond, Jason Bourne, Solid Snake or Sterling Archer wouldnâ€™t have been possible without them. You think theyâ€™re working for your team, but the whole time, theyâ€™re feeding intel to the other guys. The Agents by Saar Shai manages to translate the archetype of the double agent into an equally integral game mechanic, resulting in a game that is itself two-sided: rich and streamlined, intuitive and utterly unique. 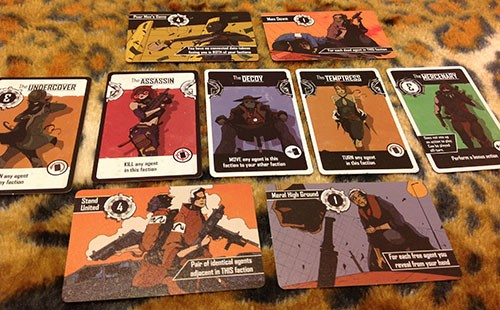 The game itself is light on narrative, letting the bold, colorful art by Dan Morison (channeling Mike Mignola and Tim Sale) do most of the talking. But even without flavor text, the story is immediately clear: the Agency has been disbanded, and all of the worldâ€™s special agents are facing off in a no-holds-barred free-for-all. As shadowy international puppet masters, players recruit and place agents to shared factions in a race to complete missions and gather intel. The world of spycraft holds no guarantees, however, and the agents themselves are mere pawns in the great game; as agents are turned, killed, retired and extracted, those pulling the strings must be prepared to out-think, out-maneuver, and out-betray.

The simple but remarkably effective gameplay conceit driving The Agents is its â€œdouble-edgedâ€ cardplay. Every agent card has two sides: one showing a command ability and the other showing one half of a white or black arrow, called a â€œdata token.â€ Each one is a double agent, offering their services to one player while leaking intel (points) to another. When you play an agent to one of your factions--rows of cards you share with each of your neighbors--you will rotate the card so that either the command ability or the data token half is facing you, with the remaining side oriented toward the factionâ€™s other owner. Whoever the command is facing gets access to that ability, both immediately and on subsequent turns. Completed data tokens, however, provide a steady drip of intel points for the player at whom theyâ€™re directed. Do you want the ability or the points? Thatâ€™s the decision youâ€™ll be making with every card you play. 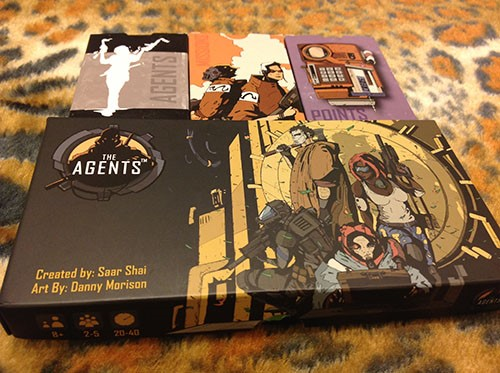 The abilities are simple but powerful, especially when combined with the mission cards, which also give a steady trickle of points as long as their conditions are fulfilled. Some cards can turn other agents, rotating them so their allegiances switch; others move agents between factions, retire them to the discard pile, or extract them to the playerâ€™s hand. Of course, it wouldnâ€™t be a spy game without the option to steal agents from your opponentsâ€™ hands or cross off a troublesome operative. Killing an agent means flipping the card upside down but leaving it in place, negating its ability and potentially disrupting existing data tokens, but they can just as easily be revived and brought back into play. The final ability is the self-explanatory draw, which shouldnâ€™t be underestimated since The Agents provides no free card draws; gaining new agents and missions normally requires squandering the very intel youâ€™ve worked so hard to collect.

Finally, there are free agents, cards from the agent deck that have a powerful, onetime ability paired with a bigger one-off payday. These are the only cards that allow you to interact with players who arenâ€™t your direct neighbors, making them proportionally more valuable at higher player counts. But even these mercs stick to the same playbook of eight abilities described above.

One of my criteria for rating a game is how frequently it delivers tough choices, and The Agentsâ€™ double-edged gameplay brings difficult decisions at least twice a turn. At the same time, it keeps the options streamlined and the action frenetic enough that the game never gets stalled on the tracks. Itâ€™s a beautiful, if abstract, interpretation of its theme and a world-class filler.