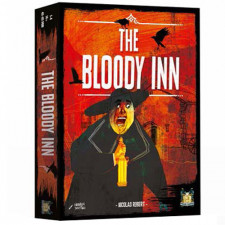 I stayed at this family-owned inn while passing through the ArdÃ¨che dÃ©partement on business in early February, 1831. The proprietors, a mean pack of backwater proletarians whose only trace of familial resemblance was the piggish gleam in their eyes, greeted me with some provincial euphemism and demanded a franc upfront to cover the night's board. Seven other patrons checked in alongside me. Each member of the family seemed to "own" a specific room and personally accepted the fee, with the remaining four rooms seemingly shared by the family as a whole. I slept poorly, for the room was unheated and roughly furnished, and I awoke several times during the night to the sound of the other guests screaming in discomfort. They must have checked out during the night, for only three guests remained when I broke my fast in the bistro, which was infested with unwholesome peasants. There were also several strangers hovering around the table, and I believe I saw money changing hands as they bid adieu to the pig-eyed hoteliers. I departed with an uncanny sense that I had barely escaped with my head. I shan't be returning--at the least, not until the deck has been reshuffled in the fall.

The Bloody Inn is a black comedy in the guise of a hand management card game. As members of an upwardly mobile farming family, the players compete to earn the most francs, primarily by killing and robbing (in that order) the poor travelers who stay at their roadside inn. If it were made into a movie, it would star Peter Sellers and feature an extended bit of slapstick in which he attempts to hide a growing pile of bodies from a stream of oblivious policemen, who just want to pop in for a cigar and a leg of mutton. Script by NoÃ«l Coward.

I don't simply mean to describe the game's theme, which isn't terribly original in itself, in this fashion. Through its gameplay, The Bloody Inn actually creates these moments of bleak comedy, encouraging players to plan big then scramble to hide the evidence. Unlike Gloom, which is funny because the cards and possibly the players are funny, here the game itself is funny, something I've not seen since Space Alert.

It's also engrossing. The tension, and the humor, comes from the brevity of the round structure, which allows each player only two actions per round. When the round begins, a new set of guests fills the rooms of the inn, distributed randomly or according to the desires of the round's first player, depending on which variant you use. Each patron has a cost and an affinity, and most have a special ability and/or an amount of cash on hand. With one of your two actions, you can bribe a patron by discarding cards from your hand equal to the card's cost (0-3); you then take that guest into your hand as an accomplice. Or you can just kill them, again by discarding cards equal to their cost.

Once in your hand, accomplices can be discarded to pay for other actions, or they can be used to build a new annex to your inn, giving you access to their special ability for the rest of the game (I like to think of it as inviting your accomplice into a more permanent partnership by ensuring they're always near at hand). To build an annex, discard a number of cards equal to--you guessed it--the card's cost. Aside from activating the guest's special ability, annexes are needed to stash corpses, one per annex. Burying a corpse is paid for in the same way as all the other actions, and it's only when properly buried that you can safely pawn the victim's valuables in exchange for francs.

The clever part of all this is that each of the four main actions--bribing, building, murdering and burying--has a corresponding affinity among the guests. If you pay for part of an action with a card of a matching affinity, you get to take that accomplice back into your hand instead of discarding it. Maintaining a large, varied hand means you can pay most costs essentially for free. Unfortunately, accomplices in your hand must be paid one franc each at the end of every round, so you'll need to strike a balance between action efficiency and upkeep cost to do well over the long term.

What also happens at the end of a round is a police investigation: if there are any surviving policemen staying the night, they will sniff out any unburied corpses, forcing players to pay a 10-franc fee to the local gravedigger and waive their rights to the former guest's belongings. A wealthy Duke may be too tempting a target to pass up, but when the inn fills with sergeants and officers the next round, you might find yourself caught in a comic loop of killing the policemen before they can make a ruckus--leaving you with even more bodies to clean up--or bribing them and getting stuck paying their wages at the end of the round.

Even when a plan comes off perfectly, there's inherent humor in bribing deputies to kill their commanding officers or calling on the gardener to construct an innocuous string of chapels and crypts on the inn's grounds. And it demands both tactical and strategic planning to do it well. The best feature of the game, though, is its score track, which caps out at forty francs. To go above that amount, you'll need to skip a turn to launder money, trading in your riches for 10-franc cheques. This adds yet another layer of comic timing to the proceedings as you attempt to put off a Marquis' burial until you've had a chance to visit the bank.

Completely divorced from the farcical backstory, this would be a smart but unremarkable Euro game in the style of Race for the Galaxy or San Juan, but the deftness with which it evokes its Arsenic and Old Lace theme gives it the edge needed to achieve "keeper" status.