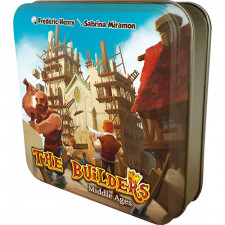 Consider the Zebra. Marty of Madagascar confided he never knows who he really is â€“ whether heâ€™s black with white stripes, or white with black stripes. The Builders: Middle Ages presents a similar quandary. It has resources, but itâ€™s not resource management. It has workers, but itâ€™s not worker placement. You play to a tableau, but itâ€™s not tableau-building. You construct buildings, but itâ€™s not a city-builder. And itâ€™s refreshingly straight-forward and quick, but feels meatier than a toss-about filler.

To be sure, The Builders is still a lighter game. If you want it to sound grander, I suppose you could call it by its French name, Les BÃ¢tisseurs: Moyen-Ã‚ge, which sounds cool unless you already speak that language every day. However, the design doesnâ€™t need to be flashy or ostentatious. It works well precisely because it strips away the chaff to get at the kernel of a hand management game.

In The Builders: Middle Ages, players arenâ€™t so much an actual builder with their own two hands as they are a foreman (no disrespect to foremen). Your job is to organize the workers. Using three actions every turn, youâ€™ll draft hired hands and building projects and assign the former to the later. Workers provide a combination of stone, wood, knowledge and/or tiles. Buildings require a combination of those same resources to complete. As soon as a workforceâ€™s aggregate total resources meet a buildingâ€™s requirements, that project is completed earning you some coins and points. The first player with a city worth 17 points triggers the end game, as long as the workers arenâ€™t harassing and catcalling the local Mademoiselles passing by.

Essentially The Builders is an efficiency exercise. While you draft them for free, you must pay to assign workers to projects. For each resource a worker provides, heâ€™ll set you back one shiny coin. Buildings also award a number of victory points all relative to their cost. So really, the game is math. Math isnâ€™t fun. Thankfully the theme, while certainly not immersive, effectively masks the algebra for gamers like me who need to camouflage the fact that youâ€™re actually doing math.

The devil is in the details. The lure of higher skilled workers can prove a bit deceiving. It may be tempting to recruit workers who supply lots of resources. However, youâ€™ll often find that using oneâ€™s three stone to work on that Church ends up squandering his two tiles. This especially hurts when having to pay five coins for the misuse. Such waste can wreak havoc on your beeline to 17 points. A threshold which doesnâ€™t take long for someone to reach.

Therefore, you need to utilize as few workers as possible to quickly finish projects. Now you can start as many buildings and/or recruit as many workers as you want. There are no penalties for unfinished designs or amassing a surplus of laborers. However, taking buildings and workers costs actions. So grabbing a variety of workers in some shotgun spread just to cover all your bases may be too time consuming. Plus an abundant workforce will tempt you to spread them amongst multiple projects, thus diluting their effectiveness. Instead you need to figure out how best to concentrate workers who specialize more in certain types and quantities, and then try to select buildings with requirements matching those that you have available.

The need to balance a small, but effective, workforce creates an interesting tension. You want to do the most with the least, which is always a rewarding puzzle when successfully solved. Calculating that equation can take more time than youâ€™d imagine â€“ certainly more than other designs of similar weight. Itâ€™s not really â€œanalysis paralysis,â€ because it never brings the game crashing to a standstill. After all, there are only so many cards available at one time. However, you might be surprised at how much you carefully scrutinize those choices. It looks overly simplistic, but burns more than a few brains cells.

The Builders doesnâ€™t have much variability. Buildings and workers all differ as far as resource specifications, but overall everything is mathematically balanced so itâ€™s not really variability. The random rate at which cards emerge can upset your plan now and then. But more often than not, youâ€™re able to take at least one useful worker or worthwhile building when desired. Scanning your options presented by the current pool of cards and analyzing how best to synergize new picks with your current stock is what makes this sort of a â€œthinking manâ€™s filler.â€

If youâ€™re completely averse to â€œmulti-playerâ€ solitaire, The Builders may not be in your wheelhouse. It has no direct player interaction. There may be some competition for a preferred building and/or worker as another player can nab a card before you. This can add a bit to the tension. But again, as cards are immediately refreshed, you always have five buildings and workers to choose from so you can generally work with something. It would be nice to implement a form of building activation as a means to create some interaction. Alas, that would add complexity, fiddliness, and time, whereas the game is designed to suppress all three of those elements.

The Builders: Middle Ages has all of a fillerâ€™s favorable attributes. It is easy to learn, plays intuitively, economizes components, scales well, is inexpensive, portable, and finishes in 30 minutes or less. Perhaps other than requiring a larger footprint than usual, it works very well as a lunchtime or travel game. Yet, it brings more to the table than typical fillers. By randomizing resources versus building requirements, and allowing several actions on a given turn, the design creates a puzzle-like experience deeper than appears at first blush, which requires a bit more planning than others in its weight class. As such, The Builders: Middle Ages is an accessible and sophisticated filler that plays quickly and offers a light, fun, and eye-catching challenge.