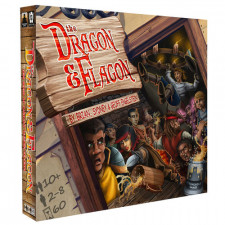 Iâ€™m not sure most people actually like programmed movement as a mechanic. Thatâ€™s not to say someone might not enjoy games with programmed movement. Titles like Space Alert and Roborally have strong followings, but I donâ€™t think itâ€™s because of that particular element. At any rate I know Iâ€™m ambivalent toward it. Itâ€™s an effective way to create chaos in a design, but itâ€™s also an unforgiving one. One wrong move will screw up all of the moves that come after, which is a good way for a game to go pear-shaped quickly.

So thatâ€™s why Iâ€™m impressed at how much I enjoy The Dragon & Flagon, the new title from the Englestein family. It knows how to use the mechanic to terrific effect. It makes complete sense that moves would have the slight delay generated by programmed movement, but itâ€™s not some draconian measure that forces players to plot their future meticulously. Instead it uses just enough to inject chaos, and lets the players get on with just having a good time. 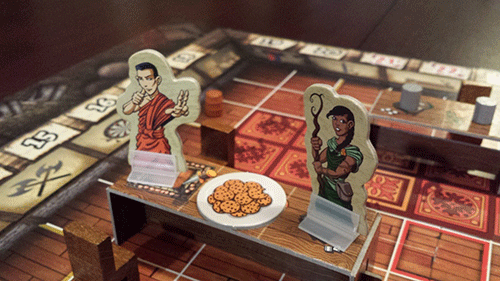 Step away from the cookiesâ€¦

The Dragon & Flagon plays a bit like the down time between D&D sessions. A bunch of fantasy character classes are in a tavern, brawling to show who can distinguish themselves the most before the law comes and breaks up the fight. Players will always have two moves planned, the current one and the next. The moves might involve picking up an object, throwing that object, dashing across the room, pulling a rug from underneath someone, or a character-specific action. Each move takes a certain amount of time to execute. Thereâ€™s a time track where every player has a token and another neutral token tracks where players are in the fight. All of the moves advance the playerâ€™s token along the track, meaning that they wonâ€™t get another turn until the big time marker catches up. Executing a slick move will take reputation points from other players, and the highest total at the end of the game wins.

Forcing the players to only plan the current move and the next one is a smart design choice. That means there will still be lots of opportunities for bungles and pratfalls, like when a player rolls a barrel where there is no longer any target, or when a swinging player lands on a table only to have it flipped over by another in the next move. But crucially, it is also not so much planning that the player cannot respond to the action in the game. If a player is in a position to make a good attack, odds are that they will stay in that position for a few turns, allowing the other players to get into the action. Many moves also allow the player to not select a specific target until the move is executed. You might have been aiming for that uppity buccaneer, but since heâ€™s moved youâ€™ll have to throw the chair at the mage. Thereâ€™s a measure of flexibility here that prevents the game from devolving into a series of constant failures from all the players, something that can definitely plague other programmed games like Roborally. Now you might be forced to plan a third move, but thatâ€™s the result of being stunned or of having a good stiff drink. Head trauma and drunkenness will slow down anyone I guess. It reminds me the most of the fun shoot-out game Colt Express, although this game is more controlled and generally less chaotic without losing any of the goofy story.

The moves themselves are specific and well-explained, something that lends a great level of detail to this game. It feels like a blow-by-blow account of a brawl, told with a minimum of fuss for something so detailed. The paladin picks up a chair and throws it at the druid, but before he can move again the monk sneaks up behind him and executes a neck-pinch. But then the monk is run over by a rolling barrel. Moves arenâ€™t generally easy to pull off, so thereâ€™s a real sense of accomplishment when you see an opportunity and can take advantage of it. It sets up a terrific win-win proposition: if you succeed, it feels like you did something awesome and if you fail itâ€™s still pretty funny.

The game is helped immensely by the production. Itâ€™s filled with 3D components, tables and chairs and mugs, with which the players can interact. Iâ€™ve grown a little weary of the constant piles of plastic figures in modern games, and The Dragon & Flagon fights against that by feeling charming rather than overproduced. The wooden components recall the heyday of German game design, and this is the kind of game that makes non-gamers want to join in. The illustrations are kind of a mixed bag, but at least the graphic design makes it clear what every move does and how they affect the game. One striking quality is the gameâ€™s diversity of characters. The different classes represent a very wide variety of complexions, and the gender split actually favors female characters. This is a very refreshing choice, and I applaud Stronghold games for creating a game that has avatars for all sorts of people. 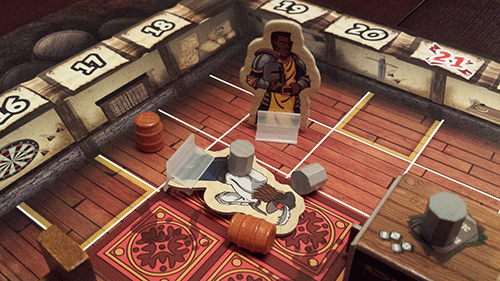 When he wakes up weâ€™ll all have a good laugh.

The Dragon & Flagon is terrific. I love the detailed story it tells in just an hour or so, and its use of programmed movement is second to none. If thereâ€™s any complaint itâ€™s that the game has a lot of moments where it can bog down if no one is moving it along. But thatâ€™s a small price to pay for what is one of the most accessible and enjoyable games Iâ€™ve played this year.