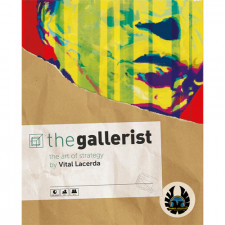 There is money to be made in the cutthroat world of art dealers. In The Gallerist, the players take on the role of gallery owners. Theyâ€™ll discover new artists, buy paintings, attract patrons, promote known artists, display and sell art, and obtain works of international renown.

In theory, gameplay is relatively simple. Each turn, you move your pawn to one of four action spaces. Each space provides you with two options. You perform one. Supplemental â€œexecutive actionsâ€ are also available that allow you to perform minor tasks. Then itâ€™s the next personâ€™s turn. The goal is to have the most successful gallery as demonstrated by having the most wealth at the end of the game. 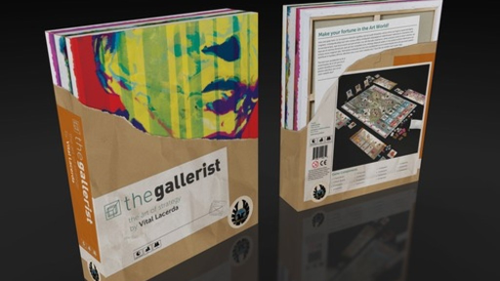 But the simple premise quickly becomes very involved. You generally canâ€™t go to the same action twice in a row â€“ discouraging players from focusing on one area to the exclusion of others. But, if you go somewhere that already has another playerâ€™s pawn there, they get to perform a â€œkicked outâ€ action. Those tend not to be quite as good as the real actions, but getting more opportunities to play is always beneficial.

Further complicating the game are four separate currencies: coins, influence, visitors, and tickets. Coins are used to buy and sell works of art and are the end-game victory condition. Influence can be used to take kicked out actions, to increase an artistâ€™s fame, or even to grab a few extra bucks if needed. Visitors must be acquired during the game and can help generate influence, coins, and fame. But if you sell a work of art, youâ€™ll need to expend a visitor. And tickets are how you move the visitors around, attracting them to your gallery or away from your opponents. 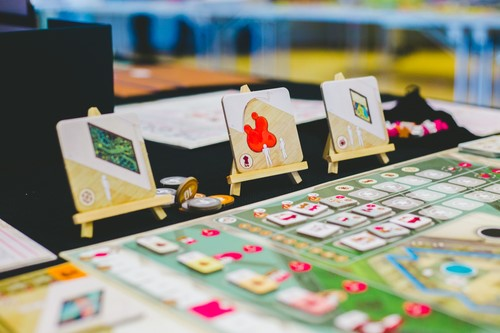 The Gallerist is deceptively deep. For instance, you have access to all the actions each turn (except, generally, where you went last turn). But often youâ€™ll have to kick out an opponent and thereby give them an extra action. So maybe you go for a second best action to prevent a particular player from getting that advantage. Similarly, when you sell a painting, you have to send a visitor from your gallery back to the plaza â€“ a neutral zone. Who you choose might be important, especially if the next player has matching tickets they could use to snap that visitor up.

Also, almost every action has some sort of cost associated with it. Youâ€™ll need influence if you want to promote an artist or money to buy one of their works. Because of this, youâ€™ll be constantly monitoring and husbanding the various currencies. Just as you get a number of visitors to your gallery where they help with money and influence, youâ€™ll be out of cash and need to sell paintings. That brings in the dough, but expels your visitors.

The trick to The Gallerist is managing this ebb and flow. At the beginning of the game, this can be difficult as you buy and sell paintings for relatively meager profit. But as the game goes on, you start to build a base of visitors. Your influence allows you to promote artists.. And your sales start making more money. Impressively, the economy always feels tight â€“ requiring constant management. But you can definitely improve your engine over time. 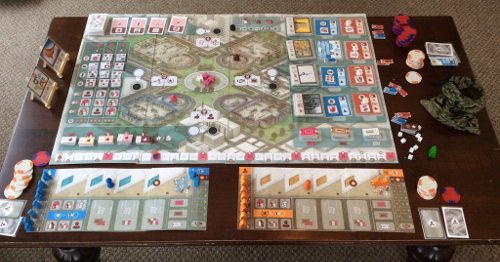 One interesting aspect is the organic and ephemeral alliances that can develop during play. No one really says, â€œHey, letâ€™s team up.â€ In fact, itâ€™s not clear that such would even be worthwhile. But sometimes, two players out of three or four will own a work by the same sculptor. So they both have an interest in promoting that artist, increasing his fame, and thus making his art more valuable. So youâ€™ll sometimes see players with a common goal working together to achieve it.

But those alliances are selfishly motivated. When it no longer becomes mutually beneficial, the players simply part ways to work on their own endeavors. The Gallerist is just too tight for altruism. Any action not spent advancing your own engine or gaining money is an action lost to the other players.

The game is also fairly open in terms of strategy. While the goal is always to get more cash â€“ and inevitably that means buying and selling paintings â€“ the best way to go about it is hardly clear. The Gallerist provides plenty to explore and numerous paths to prosperity. This is partly exemplified by the end-game condition. There are three different triggers and when two of them hit, the players get a final round and then tally their score. This two-out-of-three trigger makes it difficult for a single player to rush the end while also accommodating multiple strategies from the players.

The Gallerist is a deep, intriguing, and all around solid title. Itâ€™ll test your engine building skills as well as your ability to make use of unexpected opportunities. Making good choices, and getting extra â€œkicked outâ€ actions, can be critical to success. And if you like a deep, meaty euro-style game â€“ especially if you enjoy the art world â€“ then this is definitely a title to investigate.