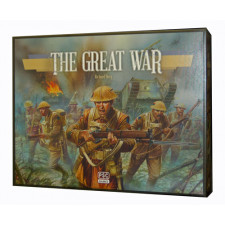 I was going to kick this review off with a historical quote, but came up empty. I was also going to throw a hard nod towards the fact that The Great War, the 84th iteration of the Command & Colors system, distinctly captures the oft neglected World War I setting. The problem is that I know very little of this monumental conflict beyond Franz Ferdinand, The Grizzled, and Kubrick's Paths of Glory.

As a game system, The Great War doesn't care about my lack of knowledge. There is historical context with linked scenarios that let you crawl through the mud of Somme and Loos, but the greater language the game speaks is that of dramatic action. Dramatic action is something I yearn for.

Much like Richard Borg's design predecessors, this is a streamlined war game that is card driven. It hinges on restriction and presenting tough choices, as your cards dictate which of the three segments of the battlefield you can activate. You'll want to push the right flank but need to put out a fire in the left, agonizing over which vector to address. Sometimes you won't even have a card interacting with the area at highest priority and you'll just need to slap a bandage on it and deal.

When you do activate one or more units you will move and possibly attack. The machine guns and ,ortars can't do both, but infantry can inch forward at a slow rate and lay down a base of fire. Many times you'll just want to run at full speed, rifles be damned, as you head up over the top and sprint towards shell craters.

That solitary action of ordering a unit to leave the safe trench-works and make a bee-line for the enemy captures the essence of The Great War. As your troops reach maximum vulnerability traversing that valley of death you get a sense of tension that's inherent to this conflict. Memoir '44 would stab a non-combatant with a rusty bayonet to hit the high notes that this design nails. 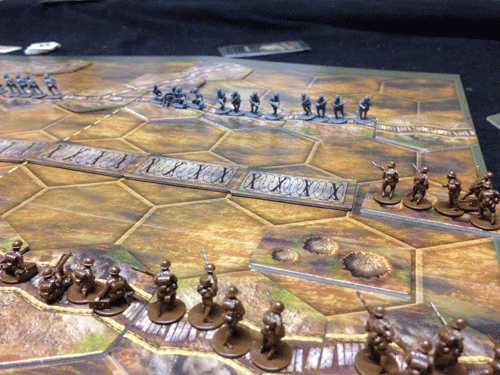 Historical context and detail is increased through pre-scenario shelling that creates a random pattern of craters in no man's land. This is delightful because it kicks the game off with a moment of chaos and unpredictability, as the attacking force is hoping for a large quantity tightly spaced.

We also have a new deck of combat cards that is handled in tandem with your maneuver options, fueling specific thematic events. You can hit the opponent with gas or pull off furious charges of inhuman speed. Drama again finds its way back to play and the design is better for it.

This is really a spectacular game that unfortunately is undermined by a couple of issues. Of lesser significance is the lack of scenario variety. I actually feel Borg did a solid job of differentiating the 10 included setups, but the nature of the combat and inherent reliance on trench lines provides for a samey feel. The sense of creativity in scenario construction does provide a great release valve here and I'm mostly pleased how they half-bandaged this wound.

The largest quagmire The Great War faces is its ridiculously cumbersome setup time. The maps tend to feature many terrain hexes, 75% of them being trenches, and you'll need to carefully place them on the correct positions. Sometimes you'll get halfway through and realize you don't have any more forking trench pieces and will have to work your way back through ones you've already placed, flipping them over to find the proper piece.

The hard plastic 1/72 scale miniatures included are great and I wouldn't trade them out--they'll even help develop your sailor vocabulary while clipping them from their sprues--but they exacerbate the problem. You'll be searching through different infantry pieces trying to place four of each on specific spaces, sometimes you'll add a special unit like a bomber. MGs and Mortars need to be organized separately and they tend to blend in when arranged on the battlefield. The entire process of getting ready for war is sluggish and contrasts starkly with the lively nature of actual play. 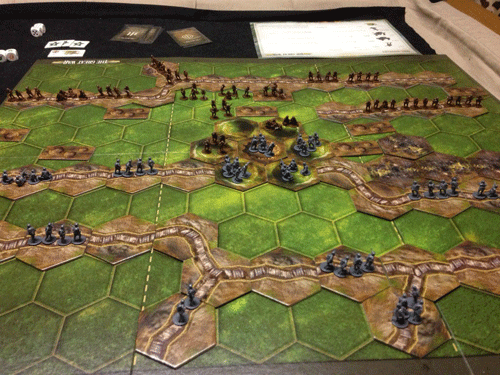 Whoâ€™s setting up? Not it.

Yet, it's a great game. It's worth the trouble and you'll just have to grit your teeth. The moments of tension are Hollywood-esque as the flow of play drives towards climax. While mechanically similar in many ways to its peers, this direct and relatively simple wargame manages to feel distinct. It just feels right, retaining that cool sense of smooth and class.

Those little plastic soldiers may not want to leave their trench-line, but you'll push them forward with a smile as the pistol sounds. Yeah, you'll wince and cower when the dice start turning your units into that cheese from Switzerland, but it's all in the name of fun. And The Great War nails fun square in the jaw.