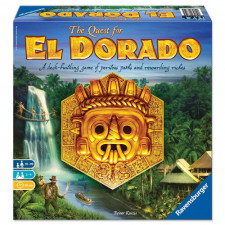 The Quest for El Dorado Review

Even when Reiner Kniziaâ€™s not at his best, heâ€™s usually at the very least interesting. When his game designs donâ€™t quite click, they still have that interesting wrinkle that makes you say â€œcool.â€ Sure, Dr. Knizia has released his fair share of cash-ins and variants over the years, but all the same, he rarely goes along with current game design trends. Heâ€™s content to forge his own path as the rest of the gaming world chases after the next big thing, be it worker placement games, dungeon crawlers, or, yes, deck builders.

So perhaps itâ€™s ironic that his latest game with an exploration theme fails to explore new territory. Sure, there is a twist in the usual market display of cards for purchase, since players themselves determine which stacks of cards funnel down and become available as the game goes on. The game also lets you save cards for future turns, an important aspect of planning your trek across the jungle or down that next whitewater rapid. Finally, thereâ€™s board play smoothly integrated into the game, though even this is hardly novel now with games like Trains, Clank!, and A Few Acres of Snow in the marketplace. 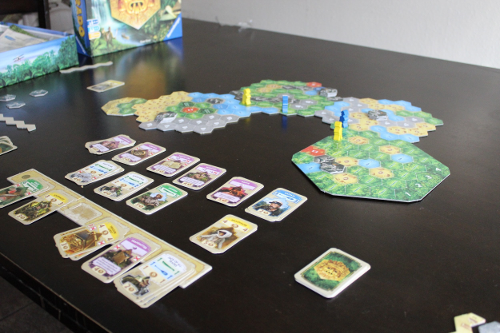 But at its core, the game is simply a very well designed deck builder, a fact youâ€™ll need to accept if you want to see what all the fuss is about here. Itâ€™s got great components, an easy-to-learn design, and maybe best of all, itâ€™s not about zombies, dragons, or trading in the Mediterranean.

The real question that we need to answer is why we should bother with El Dorado at all when thereâ€™s a host of games like it? For one thing, the game has Kniziaâ€™s fingerprints all over it, and the master of game design knows what heâ€™s doing. From a tight pool of available cards to challenging board layouts, this is no flash-in-the-pan Kickstarter design with sloppy, wonky design choices poking out the seams.

Mostly though, El Dorado works because of its great sense of tension. Itâ€™s a game about timing, clever positioning, and taking risks. When your opponents block the easy pass through the treacherous peaks, you might be able to make it around that mountain range, as long as youâ€™ve outfitted yourself properly. But if you should fail, youâ€™ll end up stranded in a hostile jungle. The last sight youâ€™ll ever see as dehydration sets in and you breathe your last will be your opponent, waving at you from a golden pyramid.

The game pulls you in different directions with every card play, a sure mark of vintage Knizia. The city of gold whispers at you in the sweltering jungle nights, urging you to move ever forward, while common sense tells you should hire another captain, scout, or bush pilot before making your way into the dense and deadly forest. And of course, youâ€™ll listen to the gold, baby, because thatâ€™s just the kind of explorer you are, and then youâ€™ll curse yourself two turns later as you float aimlessly down a stream leading nowhere while your opponents happily pass through a string of villages, paying homage to the locals for safe passage. 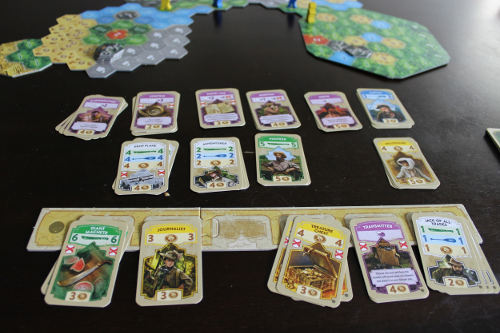 Many strategies are viable. Iâ€™ve won by going out of my way to explore caves or visit one of the rare deck-culling spaces. Players can buy just a few decent cards and trudge ahead, taking the easy but long path around difficult obstacles. You might even have luck hanging back and buying supplies for the journey before making a break for the finish, hoping to cut your opponents off just as you crest the hill and the city of gold comes into view in all its glory. The contest remains tense until the end, when one player will come dashing through the bush with a machete the size of a tree trunk, diving across the finish line as his enemies curse themselves for stopping for a drink of water. Last-minute upsets are not uncommon, though it never feels cheap or lucky.

Itâ€™s such a fun game to play, enough that I canâ€™t really penalize The Quest for El Dorado simply because it doesnâ€™t reinvent the wheel. Ultimately, itâ€™s a path well-trodden, but one youâ€™ll want to mosey down often, and thatâ€™s a very good thing when thereâ€™s so much dreck out there these days.