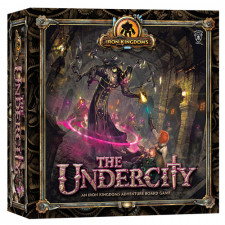 Privateer Press has made a couple of motions toward bringing their Iron Kingdoms setting (which includes the popular Warmachine and Hordes miniatures games) to the board game and card game space, but The Undercity is by far their most successful and appealing attempt to date. This is a high quality, very well put-together dungeoncrawl with a ton of great-looking plastic figures that showcase the companyâ€™s excellent sculpting talent and some fine scenario design work that outpaces some of its closest competitors. The gameplay- in particular the AI system that manages the bad guys- is largely familiar but tight. The characters are unique, including a grenade-lobbing alchemist, a bad ass trollkin, a pistol-wielding duelist, and a heartwarming friendship between a bodger and a Warjack.

Whatâ€™s more, the game feels like Iron Kingdoms in action. Especially when Doorstop, the aforementioned Warjack charges into another of the gameâ€™s steam-powered mechs and slams it into the ground. Thereâ€™s a nice emphasis on serial narrative in the seven scenarios, hearkening back to the lineâ€™s RPG elements, and there are a couple of â€œsubquestsâ€ storylines that can develop over the course of a campaign complete with their own arc outside of the main plot.

This is a game that has everything going for it and the only real complaint I can file against it is that functional-but-ugly tile graphics are plain, making every dungeon look more or less the same. And that â€œsameâ€ is bland and characterless. But itâ€™s also a great system for building a setup because it does away with the Descent-style puzzle piece thing where you spend 20 minutes putting it together. There is a board, and you lay the wall and feature tiles on the grid. It takes about two minutes.

There is, however, one big problem with Undercity and itâ€™s not the $90 retail price tag- compared to recent Kickstarters, I think this is a better quality product than some of those games weighing in at twice the price. Itâ€™s not even really a problem you can hold against it. The problem is that itâ€™s another dungeoncrawl in a market currently saturated with them.

Iâ€™m kind of OK with this because I really like low complexity, high-impact games in this genre. But thereâ€™s no doubt that many game players are going to ask â€œwhy this one and not that oneâ€, or question if they really need another game similar to five others on their shelves. Iâ€™ve stumped for this game a couple of times in various venues and have been meet with a kind of indifference.

Which is really a shame, because Undercity earns its stripes. I think itâ€™s far better than a couple of the leading brands, so to speak, and it does have a couple of uniquely compelling features, even among other dungeoncrawls. Like Claustrophobia (rather than Descent), it is an area-based design so youâ€™ve got multiple figures in a space at a time. This creates details such as pinning and complicates things such as firing a pistol or throwing a grenade into a melee. Characters can walk and attack- the usual â€œmove and hit somethingâ€ scheme- but they can also Charge, moving two spaces and earning a boosted damage roll when they strike.

The combat definitely feels influenced by miniatures games- no fancy custom dice here, folks. Both melee and ranged are 2D6+statistic based, and you make a roll to hit versus defense and then a roll to damage versus armor. Lose all of your health, and you go into a knocked down, â€œbleeding outâ€ state. Hopefully another character can get to you and revive you with a one-shot alchemical potion.

The boosting mechanic lets you add dice from the aforementioned charging action or other abilities. Characters have a deck of unique Feat cards that each have two options and these are spent like action cards- a cool touch that adds a little cardplay to the preceedings while also further distinguishing the heroes. When playing in a campaign, you can earn additional ability cards by spending experience points between each scenario(each point of damage dealt to enemies gives the team one XP) and effectively levelling up your abilities.

As for the opposition, players of Galaxy Defenders will notice some similarities. The bad guys come in red and blue varieties, and at the beginning of each turn an event card describes something that happens while also setting the color priority for the turn. After a hero has their go, a Villain card is drawn that activates a type, color or other designated enemy or enemies. Each enemy has a set of â€œif-thenâ€ behaviors and takes the first action in the triage that they can. So you might have melee thugs rushing in to a fray while a crossbowman hangs back and waits for a shot. Itâ€™s simple and effective, and it also accommodates villains that have both ranged and melee attacks as well as other scenario-specific behaviors. Spawning is as simple as rolling two dice and placing the designated villain at the 1-6 numbered entrance.

The scenario writing is colorful and fun, offering some good variety over only seven missions. The subquest mechanic is especially smart. There may be a couple of face-down subquest cards on the board at the outset, and should a hero go to check one out in their always-out-of-the-way places, they may be rewarded with a treasure. Or a rampaging, broke-down Warjack suddenly appearing in the middle of a battle. But more significantly, you might draw the starting card of a progressive storyline, which then seeds future scenarios with the other cards in that subplot. With, of course, rewards for players that complete them. This is a cool, unique element that gives the game a little narrative kick when the combat starts to wear on.

And it can wear on a bit, like most dungeoncrawls do, when youâ€™re trying to get something done and random spawns are just piling dudes on top of you. But the balance feels right- not too hard, not too easy- and there are some nicely tense moments thanks again to the good writing and the AI. Expect a scenario to last an hour to 90 minutes- just right, as far as Iâ€™m concerned.

I like this game quite a lot but I get that itâ€™s a hard sell for groups deep into an Imperial Assault or Descent campaign or for those looking for something more complex. This is an accessible, very fun example of the dungeoncrawler genre and it offers a lot of promise should Privateer Press extend The Undercity- and I think they definitely should- with additional characters, expansions or modules. I just hope it doesnâ€™t get unjustly ignored or neglected by folks who might be missing out on a surprisingly good game.