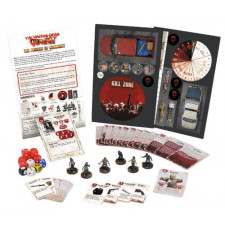 The Walking Dead: All Out War - Woodbury Review

Prelude to Woodbury is an excellent illustration of creative product marketing. Depending on how you look at it, this is either a solid release or an oddball one. It fulfills a similar niche to the full blown starter while hacking away some of the content and coming in at a cheaper price. The idea here is to reduce the game to its barest elements to support solo play and offer a taste of the greater experience. In terms of value and performance, it all comes down to perception.

As an introduction to the Walking Dead: All Out War, this abbreviated starter does perform its duties. You get a nice taste of the system as you're run through three scenarios. The first couple are pretty similar and identical to those in the core set, but the third situation is actually quite compelling. It follows the early narrative arc of Brian "The Governor" Blake and presents an interesting tactical dilemma.

From a story perspective this set is all about the Gov' before he fully turns into the evil SOB we all know him as. He's trying to hack it in the aftermath of the world collapsing and slowly coming to grips with the situation. While the narrative is exceedingly feint, it is interesting that the first two scenarios are simple supply runs, teaching you elements of the rules system. The third has you capturing walkers to bring back to Woodbury to stock the fighting grounds. You'll have to grapple the undead in melee combat and drag them back to a truck while they kick and scream, generating noise. Noise in All Out War is more deadly than bullets.

This is a challenging endeavor that will take a few stabs to get it right. As you're dragging the hideous remains of what used to be that sweet neighbor down the street, another decaying soccer mom lunges towards you. She's fixing to go all Scruff McGruff and take a hefty bite while you keep mumbling "no, no, no" like you're Amy Winehouse.

The situation presents a smart tactical puzzle because it not only illustrates the rapidly decaying moral fiber of our pro-antagonist, but it also wonderfully conveys the key elements of what makes this miniatures game so damn fun. Those wandering zeds with a voracious appetite vomit atmosphere into the mechanisms and you can't help but wallow in it.

The game does work quite well solo. It's a slightly different dynamic than the full blown game which features gangs of survivors squaring off and Rick yelling "Caaaarrrrl", but the feel and atmosphere of oppressive tension remains. 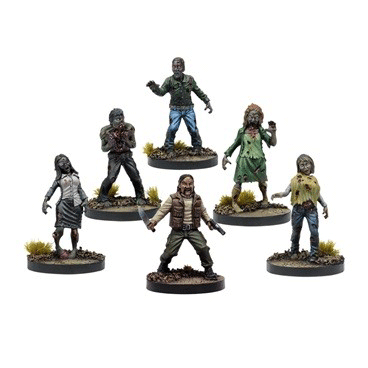 If you take the effort to paint up the minis, the results can be outstanding.

From a components standpoint this release is mostly solid with one major gaff. The miniatures are of course fantastic, requiring no assembly and sporting great detail. The cardboard all lives up to the starter set as you get all the required essentials: threat spinner, kill zone template, card decks, and range ruler. The stumble here is the ruler comes in as noticeably shorter than the measuring stick in the core set. This isn't a problem if everyone's using the same tool, but it does weaken the product's usefulness as an expansion to the larger material. Instead of having a backup for your opponent to wield, you need to leave it at home.

The rest of the content here is appropriately transferable. Some of the equipment is duplicates, but there's also a few new handy items and implements of destruction. The walker miniatures are all unique sculpts not found in the core set, and The Governor's miniature is of course not available elsewhere at the moment. Even when an expansive Woodbury set is released, that version of Brian Blake will be more grizzled and likely have different abilities and a unique pose.

Couple those elements with a fantastic solo event deck and you have a set that delivers to multiple audiences. For someone who wants just a taste of the All Out War experience, you can pick this up not worrying too much about wasting your money should you dive into the deep end. For those that bought the core set straight out, you will find use with the “noble” version of The Governor, some additional walkers, and some new cards. It's also not a necessity so no one's placed over the barrel with a barbed-wired bat to their temple. You want the Gov? No sweat. You don't? Perfectly fine.