They Who Were 8 Review

Board games have some literary qualities. They are created by an author following technical form or structure. Many tell a story, even expressing and eliciting emotive responses. A few rare titles engage players in literary exercises. In Cyrano you write poetry by card prompts. You make rhyming couplets in Goblins Drool, Fairies Rule. Shakespeare: The Bard Game rewards dramatic recitals of the playwrightâ€™s works. In Once Upon a Time you weave together a fairy tale based on cards. And the new Extraordinary Adventures of Baron Munchausen straight out tasks you with fabricating tall tales from cues as simple as they are outlandish.

They Who Were 8 attempts to capture that erudite spirit. Players are bards recounting epic tales of mythical gods. The design is even based on designer Todd Sandersâ€™ poetry, which I could not locate for comparison. No matter, as the poetic element doesnâ€™t inform play to the extent it may have originally intended. Rather players resolve action cards to bring glory (positive points) and infamy (negative points) to the various gods in play. Despite the literary miss, it is a unique and fresh offering to the hobby.

It starts with two variants. In either one, you receive a couple god tiles. The less interesting Pantheon version pits a pair of partners trying to increase glory for each other'sâ€™ patrons, while piling infamy upon their opponents. In the individually competitive Titanomachy variant each playerâ€™s two immortals are paired with another from either neighbor. Your goal is to bring lots of glory to either pair containing one of your gods, but not too much to yours specifically. Because the winner is the player whose patron has the least glory among the pair of gods with the highest total score.

While that all sounds like standard fare, the compelling twist is that your actions typically may only add, remove or transfer glory and infamy tokens to, from or between other playersâ€™ gods. With the exception of a few cards, you cannot directly affect your own patrons. Except in a 2-player session when thereâ€™s no other choice, and hence it is not as tensely interesting. For the 3- and 4-player counts, manipulating glory and infamy becomes a taut seesaw battle. Along with one-time variable powers for each god, rudimentary card-drafting and a constantly refreshed deck, the combination of its restrictive action and singular scoring create a tricky and unconventional game. Itâ€™s thought-provoking and unique. 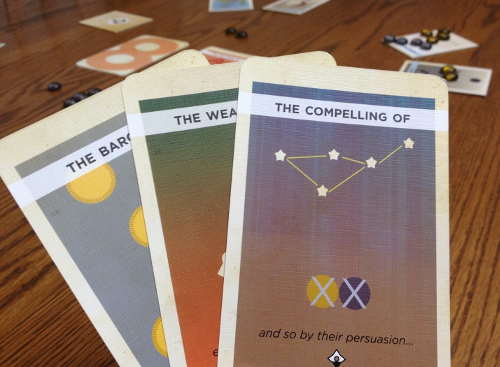 The promising concept, however, is disconnected from gameplay- the poetic element is a bit of a stretch. While playing â€œThe Valour ofâ€ on â€œBold Endyminaâ€ with its dulcet-sounding â€œstepping upon the plainâ€¦â€ is lyrical enough, the mechanisms leave it all rather dangling as the next player takes her action. Youâ€™re not crafting a linear storyline with plot or moral, even though a small narrative ebbs and flows as gods rise and fall in fortune. Sometimes the card effect follows naturally yet more often the prose doesnâ€™t mesh with its power. Not to completely discount the setting and style, it certainly voices a relaxed and casual vibe. Itâ€™s just not what sets They Who Were 8 apart from a crowded market.

Sandersâ€™ illustrations and graphic design radiate the first expressions of freshness. Its starkness hints at some underlying symbolism probably associated with his poetry. If so, that connection is lost without any reference to its source material. Otherwise, it looks rather minimalist and without any of the philosophical and social backlash, Iâ€™m sure. Initially from appearance alone, I felt a sense of sitting down to something wholly incomparable. It just turned out to be the crunch that delivered.

Specifically the Titanomachy variant creates that sentiment. While the Pantheon version welcomingly offers a rare partnership option, the all-for-one game is brilliantly different in both action resolution and endgame scoring. In and of themselves, the action cards arenâ€™t dissimilar from other designs as far as effects. The difference is in their scope. As most of these are limited to increasing glory and infamy on other playersâ€™ gods, it can be tricky manipulating affairs so that your patron ends up in the dominant pair, but with fewer points than the other. Typically in board games we move, activate, build on and strengthen our own individual pieces and components. Yet because most actions do not directly impact your own gods, wielding this designâ€™s two currencies requires thinking contrary to the ways in which we usually approach games. There is a slight learning curve to grasp, and while the rules are not complicated, it can seem awry to parse out. 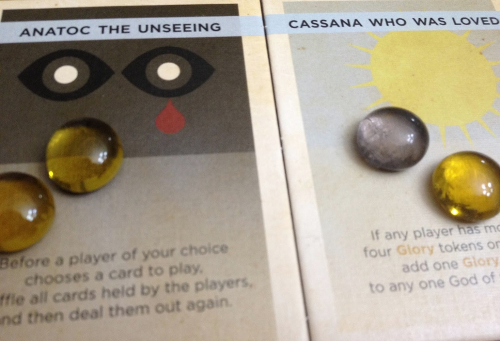 Can you recount the glorious and infamous deeds of the gods?

The victory condition itself is similarly unconventional. Gamers are used to needing more points, less frequently even fewer. But in combining the two, They Who Were 8 offers a novel twist - enough to be alluringly interesting. When you need to shed points to lower your patronâ€™s status, you eagerly wish you could direct those actions to yourself! Between influencing other gods while relying on the strategy, or whims, of players to impact yours, you almost feel like youâ€™re not playing your own game sometimes.

They Who Were 8 is an exception to the hobbyâ€™s general uniformity but that doesnâ€™t guarantee it will emerge an evergreen classic. And it doesnâ€™t mean itâ€™s your type of game. But I applaud its distinctiveness. With its restrictive action resolution and singular scoring, this minimalist design is both analytical and relaxing - a wonderfully casual half hour that rewards artful play. They Who Were 8 may never become like the legendary stories of its gods. And it doesnâ€™t completely deliver the reflective, cerebral sentiment that poetry conveys. Still, it is a standout change of pace.