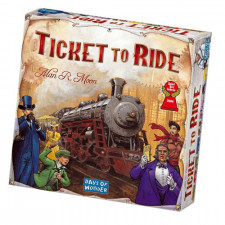 MB: When I bought Ticket to Ride back in 2004, I remember playing a few solo turns on my dining room table thinking â€œthis is going to be huge.â€ Yet I wasnâ€™t really crazy about it. It made me think of a very cleaned up Elfenland. or maybe Union Pacific with all of the interesting, more gamer-ly stuff taking out of it. But it had an X factor that those earlier Alan Moon designs were missing. It was pop, it was a top-notch Days of Wonder production and it had the potential to make people feel clever. Which is, as Woody Allen or the Coen Brothers can attest, a pretty good strategy for success.

KM: Iâ€™ve said before I prefer Moonâ€™s earlier â€œ10 Daysâ€ series to the Ticket to Ride games, but actually for different reasons: the 10 Days games are cold and brutal despite appearing family-friendly on the surface. Players are in this chilling staredown with one another, snagging key tiles the other guy desperately needs to win the game all while trying to figure out their own path to victory. This older Moon co-design certainly informed the Ticket to Ride series, as it included open and blind tile drafting, route building, and hidden personal goals. But in the transition, the product became slightly softer, slightly easier, something that holds your hand just a little too often for me to really feel like Iâ€™ve been cut loose to sink or swim on my own terms.

MB: I think thatâ€™s a really good point, that the design of Ticket to Ride- for all of its admirable approachability- is that it feels â€œsofterâ€. And I can definitely agree with the hand-holding comment as well,because when you get down to it there are a couple of strategies to winning in the game, but they are each broadcast in giant neon letters. Hold cards and build up a hand to claim routes in succession, choose â€œsafeâ€ route cards that work with each other, grab whatever you can while everyone else is drawing, and so forth. Itâ€™s all very blunt, in a way, rather than subtly compelling. I donâ€™t think games have to have some kind of esoteric or arcane approach to be good or great by any means, but I think this softness you are reflecting on also means that the game doesnâ€™t really have much nuance, like an equally simple Reiner Knizia design might.

I think that â€œstaredownâ€ you mention is in Ticket to Ride, however, even if muted. One of the more interesting aspects of the design is how it forces you to wait if you want to build a meld (because letâ€™s face it, this is a Rummy-derived design). Which in turn creates a tension- is the next player going to grab that critical route before you? But it remains a passive kind of competition, for the most part.

KM: Right, and thatâ€™s why we need to examine Ticket to Ride in the context of both its influences and its successors. The base game still has that ebb and flow, the tension of whether or not youâ€™re going to complete most, or any, of your goals. All it takes is one jerk player to start gobbling up the middle of the board, and suddenly thereâ€™s no telling if the route from Los Angeles to New York is ever going to happen. The vestiges of that awesome game of chicken from some of Moonâ€™s earlier designs are still here, for the most part, even if the design is a little friendlier. Where the series started to lose me is actually in some of the later games, in which mechanisms like the â€œtrain stationsâ€ were added to yank any teeth out of the gameâ€™s sense of conflict at the start.

Ultimately however, the question before us is whether or not the gameâ€™s patented brand of â€œpassive competitionâ€ is worth exploring for any length of time, and I think it certainly is, by and large. Thereâ€™s enough here to chew on on a given turn to give the overarching strategy some real meat, even if turns can consist of little more than making a couple blind draws and passing play to the left. Thereâ€™s a little bit of guesswork, some risk management, and a lot of taking the opportunities the deck throws at you to make your little journey across the USA, or whatever the story is supposed to be, work out in the end.

MB: But the common wisdom is that the train stations and little mechanical flourishes made the original game better. I'm inclined to agree with you, however, that it is the plain old, original T2R that is the timeless one worth revisiting. Like you said, it has just enough in it to be interesting and it doesn't really require a commitment. It's that classic â€œGerman gameâ€ sensibility that Moon was bringing forward.

Yet this is another one where a great digital implementation has all but ended tabletop play for me. It was a hit on PC and Xbox live, and on mobile devices it's a perfect fit. I've probably played ten times as many games of T2R on my phone as I ever did with real people. It takes like ten minutes at the most and I donâ€™t come out of it feeling like the lack of direct human interaction is missing.

Which kind of makes me debate whether this game actually has longevity â€œIRLâ€...and if its uptake has more to do with its digital version that its physical version.

KM: I have to part ways with you on that one. I have three or four versions of the Ticket to Ride program across my computers, phones, and tablets, and they always seem to get launched for a play or two and then abandoned forever. For me, Ticket to Ride has to be about the interaction by way of blocking, bluffing, and stealing longest route honors from the front-runner, or itâ€™s just not worth playing. Maybe thatâ€™s a sign that the mechanisms are just too thin to really support the game on its own, without a group of friends around a table for me. But to be sure, the longevity of the game in the marketplace is at least as dependent on the digital versions as on the physical releases.

MB: But more to your point, there is obviously something perennial about the design, regardless of format. I think it's one of those games where different folks can play it different ways. You can play it as a straight up kidsâ€™s game with little friction and it becomes about building the sets as much as completing routes. Casual players have both the transparent strategy and the satisfaction of simple strategies. Hardcore T2R players think of it as a more aggressive game of blocking and denial. Or you can be like me, playing the digital game for high scores and going for long shot routes, earning achievements not available on the table.

It took some time for me to appreciate this aspect of the game. Back when I first bought it, all I wanted to play was stuff like Mare Nostrum and Game of Thrones. After I sort of rediscovered the classic German games paradigm and started to value accessibility and simpler gaming pleasures again, I found that I did enjoy this game and I do feel like it's earned its status- and that nice 10th anniversary edition that came out last year.

But I'd be straining to call it a favorite, and I would still rather play an old Knizia or Kramer title. Or Railways of the World, which is really only slightly more complex.

KM: If the game occupies no manâ€™s land for you, in that you donâ€™t need it as a gateway title and arenâ€™t enamored with it enough to explore it on some kind of tournament level, then I agree. There are just too many excellent light-to-medium weight Euros in the category to really single out Ticket to Ride as an outstanding contender. It doesnâ€™t really have many flaws you can point out, but there are games that do set collection better, route-building better, and interaction in a more meaningful way.

Whatâ€™s more, the setting really doesnâ€™t fit the theme at all. The front of the rulebook tells you youâ€™re supposed to be riding rail lines, but the mechanisms donâ€™t support that narrative in any way. When so many classic Euros effectively simulate the setting theyâ€™re attempting to portray, Ticket to Ride loses some points for tacking on some mechanisms where they donâ€™t really make much sense. It may seem as if Iâ€™m really beating up on the game, but itâ€™s these little nitpicks that just keep the game from greatness in my eyes, and sometimes those are the most annoying kinds of flaws.

MB: Thatâ€™s an interesting angle- the setting seems to be travelling and experiencing America on its rail system, but thematically it is really closer- ironically- to a traditional rails game where the themes are more commercial- network building and route development. If you look at something like Moonâ€™s own Santa Fe Rails or Union Pacific, that all matches up better.

Yet T2R is all about the accessibility, and I think the â€œcharactersâ€, such as they are, and the more friendly atmosphere are important to sell that. But beyond its approachability and the mild-mannered gameplay, I'd be hard pressed to find anything particularly awesome or outstanding about the game. I respect its earned stature, I really like the digital game, but I doubt I'll play it again face to face unless my kids get interested in it. It's ultimately kind of unremarkable but inoffensive.

KM: For me, â€œinoffensiveâ€ is often the death knell for a game. Iâ€™d honestly rather play a rickety game that dares to do something wild than a game that just kind of exists, as Ticket to Ride seems to. Itâ€™s solid, itâ€™s polished, but it does lack a certain spark that keeps games coming out time after time at my house. There are even hints of a point salad here, as you can almost ignore your tickets and just start taking over the five- and six-car routes for big VPs before your opponents can start to connect their destinations together. Build a route that doesnâ€™t contribute to your personal goal at all? No matter, it can still be worth 10 or 15 instant points. Players who win consistently will definitely play in a more efficient way than that, but the fact that you can be competitive without even going for your goals is a bit of a nuisance.

It may not matter in the end. If Ticket to Ride is the perfect gateway game for a particular group, there are worse things in the world. But ultimately I donâ€™t know if itâ€™s going to retain the attention of gamers who transition to the deep end of the pool, unlike classics such as Carcassonne or Catan.