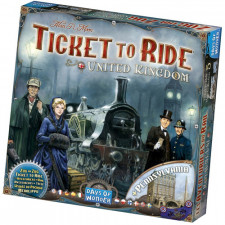 Ticket to Ride is a classic game whose now-iconic box graces many (dare I say most) gamersâ€™ shelves. Itâ€™s immediately accessible, inoffensive, and playable both competitively and casually. For many people it makes it the ultimate gateway and a game they consistently pull off the shelf. For others, it might make the classic map of the USA a little...boring.

United Kingdom and Pennsylvania are not the first new maps to come along for this game of taking train routes across some geographical area. Europe came first, in a standalone version of the game. It added tunnels, ferries, and train stations and gave fans of the game a new system to figure out. Since then weâ€™ve been all over the world, from India to the Netherlands, with each map bringing with it a new mechanic or strategic wrinkle to consider. None of them are dramatic, Ticket to Rideâ€™s skeleton isnâ€™t strong enough to support massive additions, but they all attempt to bring something new to your table.

Of the two maps in Map Collection 5, the United Kingdom map brings the most dramatic changes to the base game. At the beginning of the game, players can only claim 1 and 2-train routes around London. Anything longer or located in Ireland, Scotland, or Wales requires trading in some of your valuable wild locomotives to purchase a Technology that unlocks the appropriate ability. There is a good variety of technologies available, but starting with only 35 trains means that itâ€™s rarely a good strategy to shoot for very many. Additionally, none of the technologies build off each other in a more traditional tech tree system. Itâ€™s possible to buy the technology that allows you to build 4-train routes without having the one that allows 3-train routes, which is a little weird. It ends up feeling like jumping through an arbitrary series of hoops rather than expanding your abilities, and when you consider that at the beginning of the game you can do fewer things than in a normal game of TTR, it seems odd for an â€œexpansionâ€.

That being said, the focus on small routes and fewer starting tracks ramps the speed of the game up and creates a very different strategy. As one friend put it, it â€œlooks like a blockerâ€™s mapâ€. Having a handful of large sets of a single color is less valuable, and less important as a strategy, and puts more of a focus on completing lots of route cards. It also adds the ability to turn in any 4 train cards for a wild which is very helpful to ensure that you arenâ€™t blocked out of technologies. It does little to ameliorate issues with the luck of the draw however, and it can definitely be frustrating to watch your opponents buy technologies with wild locomotives while you have to cash in piles of train cards because you got unlucky with the draw. Itâ€™s present in base TTR, but it can feel even more frustrating here, and if you hate games where turn after turn after turn is just people taking â€œ2 off the topâ€ then you may want to avoid this map.

On the other hand, the Pennsylvania map is far more enjoyable. Pennsylvania's new mechanic comes in the form of stocks. Most of the routes on the board have little symbols corresponding to various train companies operating in the region. Upon completing a route, you can opt to take a stock card from one of the companies tied to that route. At the end of the game, players will score bonus points based on how many cards from each company they have. Each company has different point values and a different quantity of cards, so there are some decisions involved in planning the long routes you need to complete your tickets. The old system of a 6-train route being worth more than two 3-train routes may not apply, if building those two routes can give you a majority share in a couple different stock companies.

While I do like the element of hidden scoring it adds, and the extra decision points, the stock cards do not go quite far enough to make this expansion exciting. Just Like the lack of a technology tree creates a less compelling technology system than I was hoping for, the stocks of Pennsylvania still suffer by being bound to Ticket to Rideâ€™s basic system. There is only so much you can do to change your overall route because at the end of the day itâ€™s rarely worth the points to pick up a few extra stock cards by risking negative points if you donâ€™t complete your route. The stock cards become a system to squeeze the most out of what youâ€™ve already been dealt, like a caboose that is along for the ride, rather than acting as the steam engine to your strategy. Oh, and please do not bother with 2 player Pennsylvaniaâ€™s dummy player; itâ€™s as unsatisfying as dummy players typically are.

All in all, this expansionâ€™s biggest flaw is being rather unremarkable. Itâ€™s fine, but nothing special. I grew up about an hour and a halfâ€™s drive from Miami, and from time to time my friends and I would opt to take the local Tri-Rail instead of driving, thinking that it might be more fun to shake things up. Inevitably weâ€™d shrug our shoulders and say â€œthat was neatâ€, recognizing that Tri-Railâ€™s greatest asset was simply that it was a diversion from the norm. If youâ€™re tired of putting plastic trains down from Seattle to New York, you could do worse than playing UK/Pennsylvania. You could do better as well, but you could do worse.