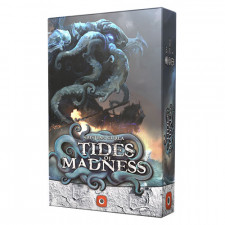 Alright, Iâ€™ll say it: I donâ€™t like Cthulhu. I donâ€™t mean as a person (maybe the Great Old One has a really charming sense of humor, I donâ€™t know); I mean as a theme. I have nothing against the Lovecraft mythos, but as a theme itâ€™s overdone and really just doesnâ€™t do anything to draw me into a game. While Iâ€™m being honest, I also donâ€™t really like microgames â€“ games that play with just a few cards and minimal components. (This was a popular trend for a while, but it seems to be on the decline now.) It seems like those games offer far less of an experience than they claim to have and leave me feeling like I should have just played something else instead, even if it had a slightly bigger box or longer play time. Lastly, since all good complaining should come in threes, I dislike when publishers change just a few things in a game then release it as a whole new game. Needless to say, I was pretty leery of Tides of Madness. Luckily, all three of my concerns were unfounded. 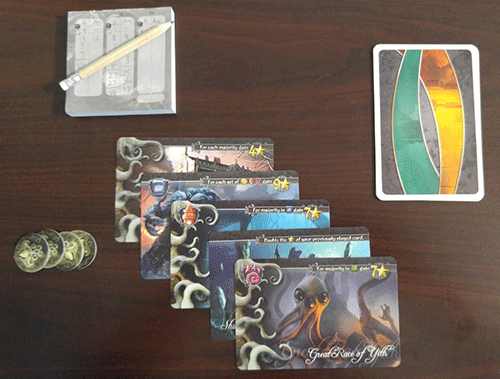 Tides of Madness is a reimplementation of Tides of Time, one of my favorite 2-player fillers that broke my aforementioned view of microgames. The basics of both games are identical and wonderfully simple. Over the course of three rounds, you will pick a card from a starting hand of five and pass the remainder to your opponent. Each card has a suit, way to score and/or special ability. After scoring points in rounds one and two, one of your played cards will be permanently kept face-up in front of you and one will be removed from the rest of the game. Got a killer combo in your hand? Bank that thing! Your opponent is going to score for each scroll? Perma-dump one of the precious three in the deck! Itâ€™s all about getting into your opponentâ€™s head, trying to figure out what theyâ€™re going to pick, second guessing what you chose, and anxiously waiting for the reveal. (Caution: This may result in some name-calling.) Each decision is nail-bitingly tense, which is impressive given that there are only 18 cards in the game.

This might sound like the game would get boring and repetitive after a few plays, but it actually gets better as you and your opponent learn the cards. No draft is ever the same. Plus, the whole game plays in about 20 minutes, so you canâ€™t help but to play several times in a row. 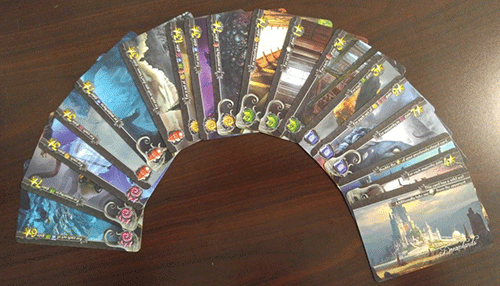 Many of the cards in Tides of Madness are identical to those in Tides of Time, but there are a few that score differently. The biggest difference between the two games is that Tides of Madness introduces madness. (Because, you know, that rascal Cthulhu!) After drafting all your cards, any in front of you with the writhing tentacles on the side will give you a madness token. Get the most in a round and you can get a 4-point bonus (or choose to lose one madness token instead). However, if you hit nine madness, the game immediately ends and you lose. This creates a really enticing push-your-luck aspect when drafting. It also means your opponent can be a real elder-hole by drafting the non-tentacled cards, just to force you over the madness cap at the end of the round.

Ultimately, Tides of Madness is almost as good as its predecessor. Its art is admittedly fantastic, even if youâ€™re like me and not into large angry fish or bumpy dudes with long tongues. As for owning both versions of the game, they are distinct enough to justify keeping both. If you donâ€™t have either, it will depend on which theme appeals to you more. For the price, you canâ€™t go wrong, especially in regard to accessibility, portability, and replayability. Looks like good things can come in threes after all.