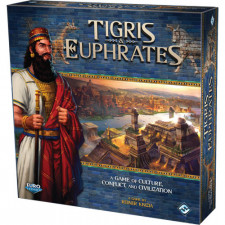 Reiner Knizia is, whether you agree with me or not, the greatest living designer of board games and also one of the most prolific. The man has been responsible for lots of seminal, influential and innovative designs over the past 30 years. Titles like Ra, Medici, Blue Moon, Lord of the Rings, Battle Line and Taj Mahal have had a profound impact on hobby games even though in recent years gamers have shifted interest to any number of young turks who have yet to make a game as simple, direct and thematic as Modern Art. One of Dr. Kniziaâ€™s premiere designs is Tigris & Euphrates, first released by Hans im Gluck in Germany back in 1998 and graced with some lovely Doris Matthaus artwork. It isnâ€™t just one of the best games of its time, it is one of the best games ever published â€“ a monumental work that remains timeless and perennially compelling. Fantasy Flight has just released a very fine and arguably definitive edition of the game and there is no better time than the present to discover or rediscover this masterpiece of tile-laying, tension and thematic resonance.

Letâ€™s talk about that last item first. Dr. Knizia is often accused of â€œpasting onâ€ themes to mechanics, which is absolutely absurd. Rather, Dr. Knizia finds meaning among the mechanics and uses them to tell simple but present narratives that reach quite a bit deeper than flavor text and miniatures ever do. Tigris & Euphrates is a story about the earliest days of civilization between those titular rivers. Out of this fertile region, two to four players will cultivate empires that expand along four metrics â€“ leadership, religion, agriculture, and economy.

As these nascent nations expand, they inherently become weaker- unless they reinforce themselves materially and geographically. As they come into contact with rival civilizations, conflicts can occur both internally as new ideas or leaders rise or they can occur externally as boundaries shift and desirable territory is taken. Disasters may happen, splitting kingdoms apart and dividing power bases. Insidious religious movements might topple a king from within. Monuments may be built by stronger empires, serving to empower their owners as long as they can be defended.

All of this narrative about civilizations emerging, rising, falling, expanding, retracting and being destroyed is told without a single word. All you do on a turn is either take two actions. You can place a leader token , but they have to be lain adjacent to a temple (red tile)- they need the support of the clergy. You can place a tile on the board the color of which corresponds to one of those metrics of civilization â€“ you get a point in that color provided that you have a matching leader in that kingdom. You can play a catastrophe tile and wipe out a tile on the board. You only have two of these for the entire game, so youâ€™ve got to make them count. Lastly, you can swap up to six tiles from your hand to try to strategically position yourself for the next turn.

Thatâ€™s it. The design is descended to some degree from Sid Sacksonâ€™s Acquire, another profoundly important and also masterful design from the 1960s. In both games, the fundamental action is playing a tile to a grid and causing interactions between aggregate groups of tiles. Within those actions is how this game describes conflict, which is abstracted as a â€œrevoltâ€ or a â€œwarâ€. In previous editions, this had been termed â€œinternalâ€ and â€œexternalâ€ conflict but I rather like the direct connection to the theme.

Revolts happen when you place a leader into a kingdom that already has a leader in it of the same color. Each player involved counts up the number of temple tiles adjacent to their piece and they can also add more from their hand. The winner effectively rises to power and ousts the incumbent with the priests nodding in affirmation to the gods. There is some drama here and a degree of risk-taking, but taking command of a kingdom with monuments that supply extra points can be decisive in the mid to late game.

Wars happen when two kingdoms are joined by tile play. The catch is that kingdoms can have leaders of any number of players, so long as there arenâ€™t two of the same color. But if this union creates a situation where there are two opposing leaders of the same color, each must count up the number of supporter tiles in their respective kingdom and again, add tiles from hand. The winner not only assumes leadership in the larger kingdom created, they also eliminate all of the losersâ€™ supporting tiles from the board as well as the leader himself. And there are also points to be earned for each leader and supporter removed. It can be devastating to see kingdoms literally ripped apart by aggression, and it can create a highly volatile game state wherein players seek opportunities to make these sweeping plays or to take advantage of another playerâ€™s folly. And that means high drama, interactivity and excitement.

There are incentives for aggression and also peaceful expansion, which is again described simply by laying these tiles. If you make a two by two group, you get to place a monument of two parts, each corresponding to a color. These generate points each turn for leaders of those colors in the kingdom where it stands. There are also treasures that can be found at temples on the board, you just need to connect two of them with a kingdom to claim these wildcard points. And youâ€™ll need them because of how the endgame scoring shakes down.

Scores are kept secret over the course of the game. At the end, everyone removes their privacy screen and you count up the points youâ€™ve earned for leadership, religion, agriculture and economy. Your final score is the metric you have the lowest score in, indicating that your civilization is only as good as its weakest element.

So there are no tech trees, no complicated turn phases and not really all that much in terms of illustrations. Yet this game vividly expresses meaningful themes, leveraging its Mesoptamian setting and simple mechanics to tell a story about civilization. Itâ€™s at once profoundly and elementally simple, bold-faced yet subtle. But never, ever abstracted down to pure mechanics.

If it isnâ€™t already abundantly clear, I love this game and I would without a doubt list it among my top ten games of all time. I think it is an important design that speaks to the value of game design as an art form and to the notion of the game designer-as-author. I donâ€™t know that Dr. Knizia ever did better work than Tigris & Euphrates, although a number of his designs are at least as staggeringly great as this one is.

The new edition is lovely. I had concerns about the â€œFFG styleâ€ applied to such an iconic and singular game, but this is one of the good reprints from Mr. Petersen and company. It is respectful, tasteful and modern. The old wooden monuments have been replaced with molded plastic miniatures; the wooden scoring cubes are now pictorial counters. The leaders used to be wooden discs, and now they are molded tokens. I canâ€™t help but lament the loss of the original artwork, but in return we are getting some very nice additions.

Advanced game rules add civilization buildings are built on three-in-a-row tiles and double the points for played tiles. There is a new cross-shaped wonder tile that generates points of any color. The board is double-sided with a more treasure-rich configuration for those that want a change of pace. I like all of these variants, but I think they are best applied by skilled, experienced players to maximize their value in extending this game.

I had never actually played any kind of variant of this game before, and Iâ€™ve had the game since it was originally published. I never really felt like it needed anything else. I have also never been without my original copy of it, which speaks volumes considering that my collection has a very high turnover rate. But Tigris & Euphrates is one of THE games, one for the ages that only get better year after year.