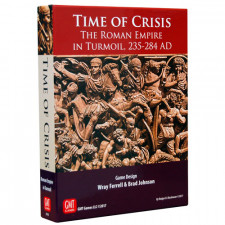 The troubles that beset Rome in the third century read a bit like the devilâ€™s own shopping list. Civil war. Pretender emperors. Assassination. Barbarian invasions. Plague. Economic collapse. Until Diocletian came along and reformed the Empire, the lifespan of your average emperor was pretty bleak. Some hamsters live longer.

Time of Crisis from GMT Games seeks to simulate this bleak period, thrusting you and up to three other players into the limelight as well-to-do Roman families seeking to forge their legacy in the crucible of the third century. Itâ€™s one of those intimidating wargames youâ€™ve heard about, big on verisimilitude and low on user friendliness â€” or is it?

Right away, one of the best things about Time of Crisis is the way it strips away almost everything that isnâ€™t directly related to its central deck-building system. For a wargame, this is one lean, mean, barbarian-slaying machine.

If youâ€™re thinking deck-building seems like a weird fit for a wargame, have no fear. The system on display here more closely resembles something like A Few Acres of Snow than Dominion. First of all, each turnâ€™s conclusion centers around setting up your hand for next time, freely selecting from anything in your draw pile. Spend too many good cards at once and you wonâ€™t have anything left over for later, and might find yourself spending a turn or two with a bunch of wimpy cards instead. Itâ€™s also possible to spread yourself too thin, trying to take a balance of cards but winding up unable to react to a crisis on your next turn. As you might expect, it pays to plan shrewdly.

Better yet, nearly everything complicated in the game is reserved for the cards themselves. For the most part, your turns will revolve around spending the colored action points gained by playing cards â€” red for military, blue for the senate, and yellow for the populace â€” to take basic actions like raising armies, having your governors claim possession of territories, or constructing fancy buildings. When it comes to everything else, thereâ€™s no need for there to be a specific rule for paying off a barbarian army with a pile of gold, because the Tribute card will handle that for you.

The same goes for all nine of the cards on offer. Foederati transform enemy barbarians into ballista-fodder allies, Quaestors defend your territories politically, Mobs fill opposing provinces with riffraff, and Pretenders let you carve out a section of the empire for yourself instead of bothering with seizing Rome at all.

Nine might not sound like a lot, but in practice these cards present just enough diversity to craft your familyâ€™s strategies to your liking. Much of the game revolves around gobbling up enough territory to add a particular card to your deck, which places many of the gameâ€™s brasher delicacies out of reach until the final act, when every faction at the table is engaged in that final push to consolidate their claim. Will you be firmly wrapped in the emperorâ€™s cloak in Rome? Declare yourself brush emperor of Galatia? Spend your time pleasing the senate by killing barbarians? Burn the histories of the previous emperor to put a dent in their victory margin?

Of course, this wouldnâ€™t be a crisis without a large dose of uncertainty. If anything, this heaping portion might be too much for some people to swallow. Each turn opens with a crisis roll that might mean anything from an extra card in your hand to massive invasion along a critical border, delaying your hopes of doing anything but flailing at Goths or Alamanni raiders for a while. Even battles are tense affairs, featuring dice that â€œexplodeâ€ on rolls of 6, making even long shots possible and surefire plans tenuous.

Iâ€™ll give you an example. In one recent game, I was ruling as a pretender south of the Mediterranean, with the provinces of Africa and Aegyptus firmly under my thumb. I had recently seized a well-developed Pontus from a rival, complete with amphitheater and border forts. The problem was that I needed Syria in order to unite my fledgling state into something contiguous. Unfortunately, the very same rival had transformed Syria into a fortress, an army stacked with trained legions sitting in the capital.

Then, a stroke of luck fell my way. An enormous army of Sassanid poured across the border. Their presence was enough to send my rivalâ€™s support plummeting. He had no choice but to march out and face his foes.

A second lucky stroke arrived when my rival fared poorly, eliminating the barbarians but losing a few too many men in the process. He hadnâ€™t planned on needing so many military cards on his previous turn, making it impossible to replace his losses before I was able to march.

And march I did, two full armies crossing the border from Aegyptus. I had a perfect hand ready to go: red cards to dislodge him from the capital, blues to replace his governor with my own loyal man, and a few yellows just in case I needed to shore up my local support. By yearâ€™s end, I expected to be the proud ruler of a newly unified empire.

To my dismay, the first battle resulted in utter disaster. Our forces were evenly matched, yet my general was routed. All the same, my rival had suffered a few scratches. Surely the next fight, fought by an army as large as the previous one had been, would go my way?

The entire table was silent as we rolled. Especially the â€œlegitimateâ€ emperor back in Rome, who couldnâ€™t stand the thought of a breakaway dictator like me growing any more powerful.

In the end? I lost the fight. After rolling a few too many 6s to be believed, my rival held the province with one last battered legion. Once the ringing in my ears subsided, I began plotting my comeback.

Depending on how that tale makes you feel, Time of Crisis may or may not present too bitter a beverage to be stomached. Drink it down, or expel it in the vomitorium? Depends how well you handle setbacks. Also, that thing about vomitoriums is historical flimflam.

Time of Crisis is a magnificent gem of a game. Somehow it adroitly captures the triumphs and terrors of life in the third century as you watch your thousand-year empire teeter on the edge of annihilation, fighting to nudge it one way or the other. Itâ€™s surprisingly brisk (three hours at most), as simple as a wargame can be, engaging, and dramatic. Oh, so dramatic. Preposterously dramatic.

Seriously, if you have any interest in this time period, and if you can swallow the occasional mouthful of bile when something doesnâ€™t go your way, Time of Crisis is one of the best games out there.