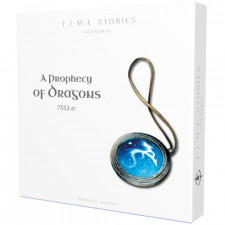 One thing T.I.M.E Stories has taught me is that games can be more important than legitimate real world relationships. Take my "friends" for instance, I can shoot them a text or throw 'em an email asking to hang out and they're perpetually sick or busy cleaning their bathroom. My fingers hammer out - "I have 'A Prophecy Of Dragons'" - and schedules are cleared en masse as if Moses is parting the seas and John Williams is leading into the crescendo.

This is the third chapter of my group's addiction and we were starting to get the shakes. Both The Asylum and The Marcy Case delivered dramatic story with first rate exploration. This core system drives the experience home and cements its place in my heart by continually surprising me. This Dragon Prophecy business brings the T.I.M.E. Stories goods again.

The first thing you'll notice when tearing open the box is that this thing is huge in comparison to its progenitors. There are three decks, including a super serious mystery deck that says "DO NOT OPEN UNTIL INSTRUCTED". You'll flirt with the plastic flaps and crinkle the edges of the translucent cage but be stalwart and control thy urges.

The decks certainly don't lie as this one clocks in as the largest commitment yet. It will take an average of around five hours to complete but can be accomplished in as little as three if you burn through scenes like Chuck Yeager, which is the only gear my group can shift to. It's fulfilling in this regard and combats some of the complaints about the game's costs.

The artwork again is top notch and remains consistently strong despite each scenario having a distinct style. The character portraits are great to peruse and each scene draws you in. The layers and depth that are persistent in some of the scenes surpasses previous efforts and it really pulls off the fantasy setting its aspiring too.

It also starts off on the right foot with a wide array of characters featuring some abilities and mechanisms that are completely new. Fantasy tropes are on buffet as we have offerings like a robust Dwarf fighter, a decrepit mage, and even a thief full of guile. The thief will have opportunities to roll people and take their money throughout the story and the mage can do what creepy old dudes that carry around dead frogs and bits of hemp do - blow stuff up.

I'm particularly fond of the magic system because it uses those generic colored tokens in the game to represent different ingredients. This could have been a very shallow mechanism that just acts as a limiting resource for the characters that are capable, but several moments in the game expand slightly on the concept and provide for a sub-system that feels well thought out and relatively strong.

The story present in A Prophecy Of Dragons is tricky. It's relatively straight forward as most of the hoops you jump through are mechanical. This is in contrast to The Marcy Case which had players collecting information from different scenes and piecing together an overall narrative. The direct script here does fit in with the Dungeons and Dragons adventuring party stereotype as the game focuses on adventure and discovery, which is both good and bad.

The main element of disappointment from a narrative perspective comes from the ending. This story is wrapped up solidly but the building climax didn't quite arrive with as much punch and shock as I'd like. Mechanically the game brings it and continues to impress, but what arrived behind that final door wasn't as fulfilling as it could have been.

Where the title really does deliver is in the evolving hints at an overriding story above each individual release. We get some juicy slices of world building in the background and some true oddball moments that provide smiles and nods. I absolutely love the discussion points that are beginning to arise with a connected narrative forming as itâ€™s easy to develop sinister theories and convoluted conjecture. I almost feel like it's 2004 and we're all watching this fantastic new show called Lost. I'll bet a sack of gold that the end of the road will be a bit more beautiful in Space Cowboy's hands.

On the mechanical side this expansion is focused around a greater degree of skill checks involving dice rolling. Agility, magic, and combat are all tested multiple times over play and those fearing Lady Luck's cruel touch should back away slowly. These tests are integrated into most of the puzzles and it really feels like the design team did a great job on providing welcoming niches for characters to fill. No one feels under-utilized or out of place.

You can also mitigate some of the luck-based challenges of the game by utilizing a huge swathe of available equipment thatâ€™s present. This story introduces potions and gear fit for a romp through a dungeon. You can throw on armor and wield huge blades. Thereâ€™s even a new ranged weapon mechanic that allows you to fire a bow from an adjacent space and avoid the counter blows of the enemy.

Unfortunately the functional limitation of relying for all of a scenario's rules to be explained via cards does cause a bit of struggle here. Some of the new mechanisms are not clearly explained and players will make mistakes. Luckily enough, nothing here is game breaking and whether you shuffle an encounter card back into the deck or leave it in a discard pile will not ruin the experience. These are simply growing pains of the system we'll have to live with as we fight through the husk to get to the tasty bits.

Despite that, there are two system developments in this story that really impress. The first is that the game cuts off certain location cards to the majority, allowing access only by a specific character. From a narrative perspective the justification is handled well and from a mechanism view they do a masterful job in providing branching and alternate paths to explore without ever cutting you off or throwing up a road block. There's just enough enticement to want to swap to a new character when you pick up the next loop and check out what's behind that [THING I CAN'T TALK ABOUT] or inside the [PLACE I CAN'T NAME].

T.I.M.E Stories is so damn exciting because it does things its own way. It provides for a first person experience of exploration and discovery you just can't find anywhere else on the market. A Prophecy Of Dragons keeps the torch burning and is a ticket any fan of this series will feel compelled to punch. The show on the other side will ultimately win you over and you will not want to be on the outside looking in.