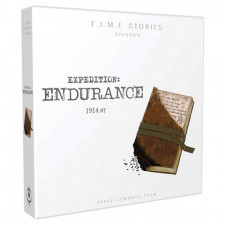 Expedition Endurance has been a long time coming. It feels like it's been an eternity since we encountered Under the Mask and were left underwhelmed with its bland story and lack of excitement. This case is nothing of the sort as we're greeted with a treacherous journey through the arctic and a constant tease of the supernatural. That sense of mystery and awe has clawed its way back into T.I.M.E Stories and the game is better for it.

One of the more interesting aspects of this system is seeing how designers continue to take the broad stroke concepts and apply a personal touch. In this expansion we have a new main mechanism and a couple of twists which foster a strong sense of paranoia. Trust remained low at the table and we constantly doubted each other. This provided an escalating sense of tension that was interwoven masterfully with the outright despair of this particular narrative.

From an atmosphere and story perspective, Expedition Endurance may be my favorite experience yet. While Under the Mask, and to a lesser extent Prophecy of Dragons, felt a little bland and mundane, this journey to hell felt alive and dangerous. That sense of wonder and exploration amid a kaleidoscope of horror lodged itself deep within. It was fantastic. 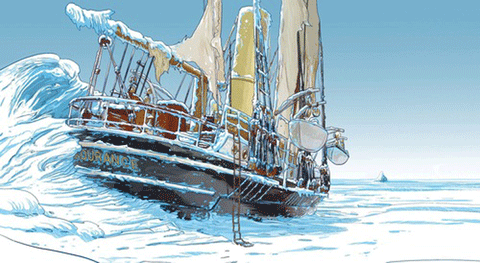 The problem is that this system continues to hold itself back. Expedition Endurance is a very linear adventure that doesn't allow you to stray far outside the box. It doesn't offer any puzzles whatsoever besides a small, and rather clever, memory conundrum. Its tricks are more focused on keeping you on your toes and guessing than they are on intellectual engagement.

It's also slightly disappointing that the new mechanism is one the game actively wants you to avoid. It's a penalty of sorts and you're incentivized to minimize the damage, but players who suffer the most get the most joy. Watching another person squirm, in both delight and terror, while reading a card is not quite as fun as actually being the one hit in the gut. This seems to be a big disconnect with the scenario as the juiciest bits require you commit to being slapped around.

I'm also thoroughly nonplussed at the lack of continuing that excellent meta-narrative emerging from previous cases. With the culmination of Under the Mask, it felt like we were building towards something and a picture was starting to emerge. In Expedition Endurance we have literally no mention of any of that noise. Instead we're focused on the macabre state of the here and now.

That wound festers when the scenario concludes. The final encounter is certainly interesting but the epilogue is nonexistent. It's as if the designer was in a rush and had to wrap everything up in a sentence or two. This is most disappointing because that escalating sense of tension throughout the scenario never really pays off. I'm left not quite understanding some important details in the story and feeling somewhat hollow.

What's truly amazing is that despite all these flaws, Expedition Endurance is one of my favorite experiences. It captures the atmosphere present in both The Marcy Case and The Asylum, returning the game to its roots of horror and mystery. The new mechanisms are very interesting and the central twists were unexpected. This game is at its best when it's functioning as a jack-in-the-box of surprises, ready to explode with every rotation. While this one doesn't quite deliver a full payload, it does hit you in the nose and fill you with shock just enough to keep you entertained throughout.

Expedition Endurance stumbles a bit like a drunkard in a blizzard, but it manages to mostly deliver on its promise. If you're a fan of the darker settings the agency has explored, then this one will likely satisfy. If you're looking for a more whimsical or tight experience, then cash in your ticket and look elsewhere.