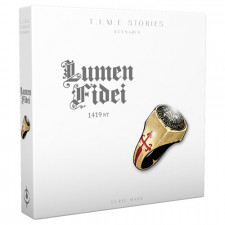 T.I.M.E Stories is approaching its second birthday and it's finally happened. The game that was full of potential is coming of age, and it's a sight to behold. Much like Holden Caufield's awkward maturation, the journey has been a bit rough yet equally full of wonder. If the message isn't translating, let me be clear - Lumen Fidei is the metaphorical bomb.

The latest module sees agents of the Consortium travelling back to 15th century Spain. You are infiltrating the inner workings of Christian militant orders in search of a precious stone. Why? Well, this is T.I.M.E Stories yo, so we don't really know. We just do what Bob says while resenting his guts.

You'll run into Muslims wanting to take your head, Christians who are willing to kill to protect their secrets, and a large dose of the weird. The primary new mechanism is a scale of grounded religious morality. Characters swing one of two ways--pious or heretical--and receive bonus dice to tests based on the party's collective moral standing. The way it ties in to different story elements and the path of the narrative is slick.

This adds a large dilemma to play as you'll need to balance delicate choices with the group's standing. Do you take a juicy opportunity to swipe the Legate's goods or do you turn the other cheek and keep your chin up? The mechanical weight behind the decision organically breeds some interesting role-play that I've yet to see in this excellent game series. Normally I don't feel bad ganking an impoverished kid's toys on the street, but in this instance I feel a slight twinge and need to work just a little harder to suppress it.

Unfortunately Orlando Bloom is nowhere to be found.

This is a dark story and one with escalating tension. The mechanisms feed into this quite well as we see several new twists. The game continues to innovate within a restricted system as designers tweak and develop new processes. This is an important aspect of the modules as they remain distinct mechanically, not simply from a story perspective.

The only criticism to be levied at Lumen Fidei is the over-reliance on a key puzzle late in the scenario. It's a solid conundrum with a clever solution, but it's also a bit difficult to tie together. Unfortunately it wants you to pay close attention to certain details while not placing enough emphasis on this aspect. Since this is played as a cooperative experience, much of the text is read aloud and not finely inspected. The design doesn't have the instructional touchstones that its cousin Unlock! possesses and it operates in a different frame of mind. Getting stuck in this sinkhole feels unsatisfying and halts the excellent progression dead in its tracks.

Whether you head to the official hints in the online FAQ or your group includes Encyclopedia Brown and you're able to solve the damn thing on your own (show off), you'll eventually get past it and be on your way. The ending is phenomenal and finally nails the climax. There are multiple angles to the narrative and much to be considered. The excellent meta-story element is back and ever present. Discussion of the Syaans and Elois return and the gentle tinges of clarity begin to emerge. It's enthralling, really. 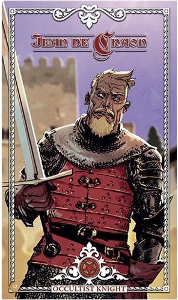 If given the choice, always choose the occultist.

When Lumen Fidei wraps itâ€™s a brave new world. A multitude of talking points emerge and theory-crafting is given a fresh injection of life. Thereâ€™s additional opportunity to perform research and engage in story elements outside the scope of play as the game has come full circle in developing its mythology. Doubling down on this outer sphere of narrative really cements the strongest elements of the game, most notably its central mystery.

T.I.M.E Stories is all about soaking up every inch of the long ride. Just when you think the coaster is about to jump the tracks, it bears down and throws itself into a dive. The thrills return along with that wide grin and everything is well again. Now, when's the next one getting here?