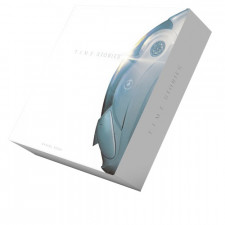 I'd walk across a booby-trapped floor inscribed with Latin characters, traverse an invisible bridge, and stare into the eyes of a frail knight to discover a game that perfectly nails a greater sense of structured narrative. Space Cowboys' T.I.M.E Stories seeks to provide just that and it may finally be the magic bullet everyone craves.

This game does something completely fresh by leaning on old tricks from its sister industry. This is the tabletop equivalent of Monkey Island or Myst, providing a point and click adventure style exploration full of twists and exciting discovery. It labels itself a "decksploration" game as you're working your way through a deck of location cards attempting to solve the mystery by piecing together strings of clues.

Ambition is the primary asset of T.I.M.E Stories and it manages to infuse that philosophy throughout. The system has players embarking on jaunts across time and space to visit moments in history jeopardized by man's narcissism and penchant for carnage. With the invention of time travel, abuse quickly followed and nefarious individuals are utilizing the technology to cause temporal rifts that threaten the survival of mankind.

You answer the call by enveloping yourself in a receptacle that most closely resembles an oblong shape linked to grief. Play is centered on scenarios fueled by large decks of beautifully illustrated cards. Each story takes place in a different setting as players inhabit the body of a local, using their strengths and weaknesses as a tool to fight their unknown quarry. It's all about unraveling the mystery and confronting the malicious.

T.I.M.E Stories is a very different show than anything you've been to before in your life. This cooperative game has your group entering different rooms and locations and gathering information and items. Players lay out cards forming a panoramic view of the room or area and the game immediately starts to pull at the edge of your shirt, drawing you into its vision. You can stay together or split up in the room, "travelling" to the different cards.

While the front of a typical location card has an engrossing image of a psychotic woman at an easel or a man brandishing a sharp stabbing implement, the back will feature additional text or artwork forming a piece of the puzzle. Occasionally you will roll dice to perform skill checks based on your unique character's stats possibly even engaging in armed combat.

The genius of the game is keeping you on your toes by providing a dense narrative that sparks your interest. The closest proxy to the gameplay is Sherlock Holmes: Consulting Detective, yet there is ultimately great disparity between these distant cousins. Sherlock is a paragraph driven game that feels much more like reading a novel with some limited choice. It's interesting and engrossing but from the third person. T.I.M.E Stories shifts the dynamic to the first person by having you experience through the senses of the protagonist. Your health and sanity will be threatened, your choices are impactful, and the story isn't so much discovered as it is touched and interacted with.

The largest element that imparts this experience are those panoramic room layouts. It's a simple thing, but by presenting 75% of the game's tactile focus around the perspective of your involvement in the scene, you get a sense of ownership of narrative. It's not someone else's excellent writing your observing, it's your tour through a twisted 1920's insane asylum.

Yet the writing here is very strong. Dense paragraphs or long winded speeches are not the entree, rather most everything is kept lean and detailed just enough to reinforce the imagery of this fictional world. It lures you in and then will inflict shock and awe as it pulls little mechanical tricks - utilizing components in ways you wouldn't expect. There's a great attention to detail in the presentation and how you experience the story as the editorial touch is precise and always methodical.

With such a new experience there are bound to be growing pains. T.I.M.E Stories suffers from a couple of these and the first may be the hardest to swallow - price. The included story in the base game only took my group two and a half hours to complete, which will cause shocks of horror amongst those looking to maximize their capital. Since this game is about interacting with a cohesive narrative, you cannot reliably replay the same story twice.

The cost of innovation is tough here and will need to be weighed accordingly. It's also important to note that the base game is needed to experience each of the expansion stories that are planned to release on a quarterly basis. The release model thus is more similar to a Legacy-style game melded with Fantasy Flight's LCG line. That's a crazy combination that has placed itself as being primarily judged on the strength of the experience outweighing the cost at the gate.

Another minor gripe is that the game has you playing over multiple loops of time which can cause content fatigue from repetition. When you run out of time you fail and need to start back over, hopefully having gleaned enough information to be able to pick up just where you left off. This is baked into the gameplay and length and there's no way around it.

The aggravation is centered on having to re-experience encounters you've already played through. This isn't exactly Groundhog Day as much of what you find can be skipped entirely, but even having to search through the deck of cards for the room or two you need to backtrack through can be an annoyance. It's a small blemish on an otherwise exceptional game but I feel it's one they could certainly avoid with better mission structure.

Despite those two red flags, this is a game that leaves you excited and wanting more. It's the type of experience you seek out opportunities to talk about and want to find others who have seen what you've seen. Congregating like a group of veterans swapping war stories, nostalgia is felt almost immediately and the emotional tie is real.

T.I.M.E Stories is the type of game that not only has enormous potential, but it absolutely brings it right here and now. It's a quality release that is so satisfying and fulfilling that I can't even be bothered to spill digital ink on the horrendous insert and storage issue. This is a game that comes close to transcending the medium and provides something you won't find elsewhere. It's truly innovative and doesn't rely on throwing some impressive images on a Kickstarter page to prove it.