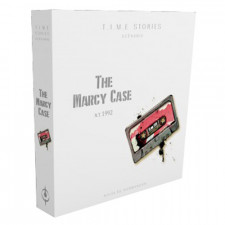 While T.I.M.E Stories blew my hair back and gave me a back-rub, what really had me excited was the direction this game could take going forward. The enjoyment I received from the Asylum story was immense, but the potential knew no boundaries. The Marcy Case may be an expansion coinciding with the base game launch, and thus not an accurate picture of the maturity of the design over the long haul, but some of that promise is certainly being attained.

This case feels radically different from its forefather. The overriding structure and primary system is of course the same, but there is a great deal of evolution and creativity in the sub-systems. Setting the stage for this new direction is the gorgeous artwork that takes on a completely different style and tone from the base game.

When laying out the Plan, a selection of four cards that makes up the location from afar that you will be exploring, you can already tell this game has a plethora of tricks up its sleeve. Instead of the blueprint-like minimalist design of the Asylum, we have a graphic novel-style first person view of a wrecked town with key locations picked out with highlights. It's a subtle shift mostly in perspective and tone, but it brings you out of your T.I.M.E Stories comfort zone very quickly. It sets the mood and tells you that no, you haven't figured this game out yet and we've only scratched the surface.

This art style continues throughout The Marcy Case and contributes to the unique identity of the subject matter. When gearing up for the mission and entering your briefing, we're immediately tossed new mechanisms: Street cards, Noise levels, and full-fledged combat that has a nice variety for the weight of the mechanics. Bob throws you in the Caisson and slams down the pedal throwing it into high gear immediately.

From the first scene of the story until the last you're up against pressure not just from time but from external "aggressors" - I once punched a kid in the mouth for spoiling the final season of The Shield so keep watching me tip-toe. In addition to utilizing a firearm stat not seen in Asylum, we're gifted a pretty wide assortment of weapons and items in The Marcy Case. There's definitely a somewhat stronger "toy" factor when it comes to gear and managing combat effectiveness.

That excitement of the mechanical possibilities and room for creativity the system provides is definitely fed with this release. We see locations that act completely differently from anything in the base game, an interesting branch of multiple paths in the story, and an extremely clever use of the generic tokens to denote a timer element that will have you groaning out one corner of your mouth and smiling with the other. It constantly feels like you're not just unraveling another pretty solid narrative but also exploring some really exceptional game design.

One of my minor complaints in my T.I.M.E Stories review was that the game has you retrace your steps and perform some actions which begin to feel rote or stale. In a game full of magic and excitement you're sometimes served a bowl of cold chicken noodle soup. The Marcy Case does a better job of juggling the challenge of repeating runs through a fixed narrative by providing more opportunities for challenging optimization. That is, instead of running back through locations you've already experienced to acquire a key item necessary to further the plot, you're given more discretion on acquiring items to help you trounce your challenges and are allowed to skip larger chunks of story to catch back up. It feels more refined and the pace more taut. It just feels better.

The Marcy Case still suffered slightly from my second issue with the base game in that it's a relatively short experience for the cost of admission. This story did take my group just over three hours, but it still could feel somewhat thin to the gamer on a budget. Despite this, the overwhelming opinion at my table was that this was an experience the group wouldn't trade for anything. This game takes you to places you've never been to and offers a spectacle that makes your mouth water.

If you're a fan of T.I.M.E Stories you don't want to pass on this one. Clever new mechanisms, a more refined pace, and a fresh new story make it one of the warmest and most satisfying embraces a fan of narrative gaming will ever see. When pushing around some minis and rolling dice at game night this past week, the look on our faces said it allâ€¦

I'd rather be playing T.I.M.E Stories.