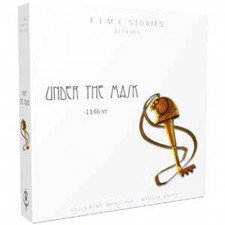 Under The Mask is the fourth adventure in the hugely successful T.I.M.E Stories line. This chapter is centered on a trip back to ancient Egypt to investigate a crime perpetrated in Thebes. It's a time period that boasts a native sense of adventure and wonder. It's a time period that also possesses a strong sense of allure due to alien religious customs and a vibrant mythology in stark contrast to our own. In short, it's great stuff to explore in the context of a story-focused game.

Unfortunately, it's clear from early on that the promise of the setting is never quite fulfilled. Under The Mask is one of the more mundane and mellow experiences in this systemâ€™s young existence and it has you consistently waiting for something, anything really, to happen.

That's not to say this story is bad or the game is not enjoyable - this is still one of the most unique experiences you'll have - but it could be better. The bulk of the session consists of the standard point and click adventure route of go here to grab that item so you can go to this other location and gain entry. It's chasing keys to unlock new areas and gather intelligence.

The greater mystery of this adventure doesn't tease and isn't exactly playful, as you're simply trying to track down the stolen mask from King Tut's grave. While opportunity for the supernatural and insidious opposition arises, it never really occurs and it always sticks to a very blasÃ© atmosphere.

Like all of the previous modules the artwork here is anything but blasÃ©. We have amazing vistas, huge panoramas of Egyptian life, and get to explore some pretty stellar visuals. That sense of connection to the scene through interacting with gorgeous art is present and stellar. It's why you can jump into a bland story and still reap a great deal of enjoyment.

Mechanically this is also one of the more understated releases. It has the least amount of fighting and only boasts a few skill tests. However, Under the Mask does include a huge game changing core mechanism that is brilliant and really packs a Muhammad Ali-sized punch. It offers a new way to farther the narrative and open up additional options while packing weight behind the decision and adding some tension. I don't think this new mechanic is fully utilized just yet, but it's promising and I can see it re-incorporated going forward.

In addition to that new innovative doohickey that I'm being intentionally vague about, there is one other really great aspect of this story that brings it all home; the ending presented happens to be the best thus far. 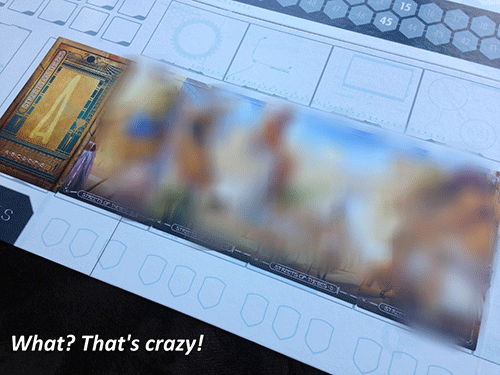 The adventure picks up with a really clever simple puzzle near the end before offering an encounter with lasting impact. You're presented with an exceptionally compelling choice in the final room that ties into the meta-story. Those dots of over-arching narrative are beginning to form some connections and players finally get to directly interact with that due to this conundrum. It's fantastic and had my group discussing the game for a long time afterward.

There's also a nifty little bonus experience for those who succeed at the mission. This has the potential to cause some angst but it's a very neat extra that I absolutely want to see more of. Whenever a game can produce visible excitement causing everyone to sit up straighter in their chair and open their eyes wide - those are the moments that need to be hammered relentlessly.

As a total package this unfortunately comes in as a mixed bag. A Debbie Downer could chime in with the fact that the past two scenarios now have not fired on all cylinders. I don't believe a trend is forming as I have extremely high hopes for the next two adventures, particularly the Expedition which seems to be wandering dangerously close to John Carpenter territory.

While Under the Mask may not let you burn Kurt Russell's body, it's still a worthwhile endeavor for fans of the game system. It's also somewhat mandatory if you want to suck up every morsel of that background story with some large hints dropped in King Tut's tomb. Just make sure your expectations are more aligned with National Lampoon's Vacation than with Steven Spielberg's Indiana Jones.