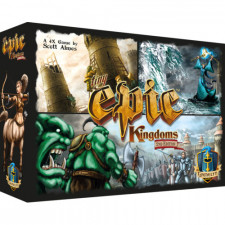 The quest to pack massive gameplay into a tiny package and short playtime is as old as gaming itself. Or rather, itâ€™s as old as 21st century gaming. Back in the day, games were expected to take an entire weekend to give an epic 4X experience, but we canâ€™t be bothered to commit that kind of time these days, so Gamelyn games and Scott Almes attempted to pacify us in 2014 with Tiny Epic Kingdoms. Now, their 2nd Edition ruleset, including the Exploration mini-expansion, finally brings the exploration X into a 4x game thatâ€™s more epic, less tiny, and lots of fun.

Players select a fantasy race and one side of a small game board to be their portion of the kingdom, then use their imagination to see how each separate board fits together to form the world, a clever mechanic that scales the map perfectly from two to six players and adds more variety to this small package. Then, a starting mix of food, mana and ore is selected, and the action begins. 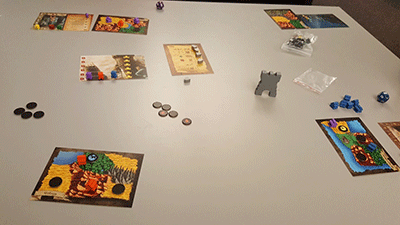 Using role selection gameplay introduced by Puerto Rico, the active player chooses an action. Continuing in order, all other players may either carry out that same action or collect resources, smoothly integrating exploitation into gameplay without the need for tedious upkeep. And like Puerto Rico, the key to winning TEK is choosing the action your opponents canâ€™t follow, usually due to lack of resources. If theyâ€™re low on mana, research to upgrade your magic level and unlock new abilities. If they lack food, itâ€™s time to expand and bring more meeples into the world. Exploration tokens bring the final X the original game lacked, allowing a patrol or quest move to uncover beneficial structures, free resources or killer bandits. And the second edition rules have two tweaks to the exterminate aspect, the first streamlining the process and the second seeming to diminish it, until a closer inspection reveals it doesnâ€™t really affect warfare much at all.

War Power and War Total from the first edition have been replaced by the simpler War Cost, and races whose abilities affect war have had their cards rewritten to align with this change. Itâ€™s easier to understand the Dune-like hidden committal of resources now, making battles faster and easier to resolve and breaking alliances far more powerful, since one battle now resolves all conflicts between former friends. And the option to retreat is included, too, which stung my Ameritrash side at first, since it seemed to throw a Euro-sized bone to the â€œwhy canâ€™t we all just get alongâ€ crowd, but in practical terms, retreat is rarely an option since it costs precious resources few players have stockpiled, so most battles end in death, just like before.

Resources in TEK are like money; theyâ€™re no good unless you spend them, and having a large stash of food or mana means youâ€™re likely losing the game, which can strike traditional civ fans as odd, but youâ€™ll get used to it after a couple plays. TEK rewards action, and while itâ€™s possible to win without ever fighting (some races thrive this way, in fact), itâ€™s not possible to win by sitting and stockpiling goods. If you canâ€™t benefit from every action others take, youâ€™ll end up a footnote in the dusty scrolls of the kingdomâ€™s history, well behind the winner, who likely won by maxing out their magic level, a knock on the gameâ€™s â€œmultiple paths to victoryâ€ that was hopefully going to be fixed by the second edition rules, but was instead shifted to the Heroesâ€™ Call expansion. Two years later, the majority of games still end when a player maxes out their magic ability. Bringing all seven meeples to the table ends the game, as does building the fifth level of a playerâ€™s tower, but the former requires too much food and the latter rarely provides any other benefit, so two of the paths end up barren stretches of tumbleweed while all players race down the magic highway toward victory.

This is a minor knock on the game, however, and since advancing in magic unlocks unique faction abilities, the synergies and semi-Euro engine-building revealed at each step greatly enhance the gameplay, giving each race a unique feel and strategy, and showcasing the epic game in this tiny package.